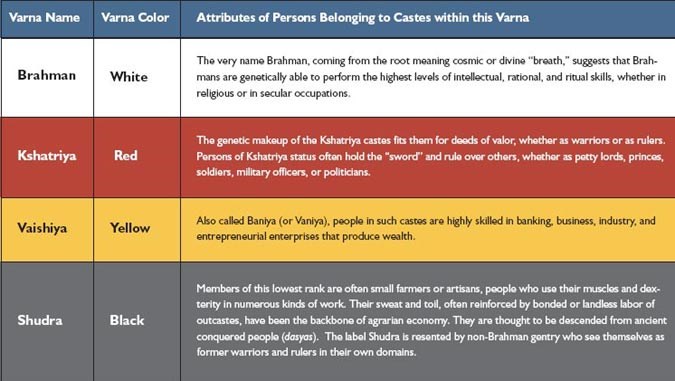 In India, every living thing is seen as having features intrinsic to its "birth" (jat). Among people, there are roughly 3000 separate "birth groups" or "castes" (jatis), each so ethnically distinct that, by tradition, intermarriage and interdining between castes has been unthinkable. No two of these castes can be mingled or mixed, it is believed, without causing cosmic chaos or confusion. (To do so would be like mating a chicken with a cobra.)

Thousands of years ago, Brahman elites began to devise and perfect a system for ranking castes according to degrees of inherited "purity" or "pollution." They fitted jati or caste into a hierarchical social structure of four categories. Each category or class, symbolized by a "color" (varna in Sanskrit), contains hundreds of castes. (See table below.)

Every male belonging to a caste within the top three varnas is "twice born" (dvija). Initiated at the age of eight, when "sacred and secret" family knowledge is whispered into his ear, he begins rigorous training in unique family skills. Each person's inherited knowledge (veda) is sacred. Together, all castes within the three highest varnas make up roughly 15 percent of the population (5 percent in each varna). Shudras are called "once born" and number 40 to 50 percent of the entire population.

As if this were not complicated enough, two groups of castes fall outside this ranking system. The first category, constituting some 15 percent of the population (or an estimated 200 million), has many names: avarnas ("colorless," hence unseen), Panchamas ("fifths"), outcastes, untouchables, depressed classes, or Scheduled ...

ConversionHistoryIndiaInternational
Issue 87: Christianity in India: A Faith of Many Colors , 2005
Previous Article
Of Saris and Such
Jennifer Trafton
Next Article
Turning Point

This article is from Issue 87 of the Christian History archive.