When Evil Strikes: A Christian Answer to 'Isn’t Religion the Problem?'

Home > 2015 > November
Church & CultureNovember 16, 2015
When Evil Strikes: A Christian Answer to 'Isn’t Religion the Problem?'
With so much evil done in the name of religion, how is being a Christian any different?
by Karl Vaters 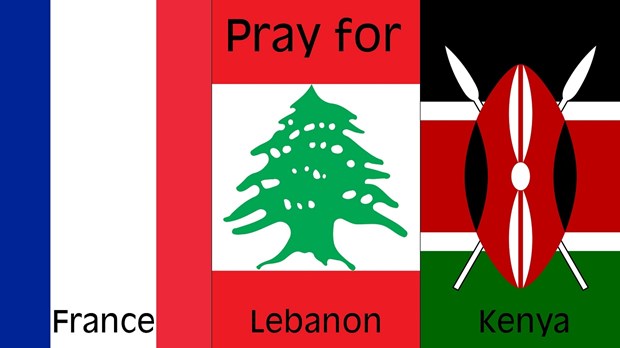 There was a lot of pain and suffering in the world last weekend. Caused by horrifyingly evil acts.

Our church prayed for France, Lebanon, and Kenya yesterday.

In Lebanon, 43 people were killed in two bombings that, according to the New York Times, were “claimed by the Islamic state,” who also claimed responsibility for the Paris attacks.

In Kenya, gunmen from Al-Shabaab, an offshoot of the Islamic Courts Union (ICU), killed 147 students. According to a report from BBC.com, “The militants singled out Christians and shot them, witnesses said.” (UPDATE: Although the BBC.com report is dated November 15, 2015, an alert reader has informed me that the attack actually ocurred on April 2, 2015.)

After church, I was asked a poignant, difficult question.

“How do I answer my non-Christian friends when they ask me why I’m a Christian? They’re telling me that the problem is religion and belief. When I try to tell them Christians aren’t like that, they point out the Crusades and Westboro Baptist Church. I don’t know how to respond to that.”

Here’s what I told him.

1. Acknowledge and Repent of the Church’s Sins

Massively evil acts have been perpetrated in Jesus' name.

From Constantine, to the Crusades, to covering up the sins of pedophile priests, the church has blood on her hands.

2. Weep With Those Who Weep

This is not the time for debate. Or arguments.

This is the time for sorrow. For prayer. For empathy.

Yes, I’m angry too. And I want to let my anger loose, because anger feels better than sadness.

But we can’t let anger win because, as I wrote in my previous post, “Anger is easy. And cheap. And, in these situations, almost always wrong. Empathy is hard. And deep. And always the right thing to do when people are hurting.”

3. Keep the Focus On Jesus

Being a Christian is not about following other Christians. It’s not about justifying or sanitizing the evil acts done in Jesus’ name.

The symbol of Jesus is the cross. It shows us that God came to earth, not to kill, but to die. Not to hate, but to love.

Don't focus on following Jesus AND

Jesus and anything is always less, not more.

Don't focus on following Jesus INSTEAD OF

Yes, you could probably win the Jesus vs (insert anyone’s name here) grudge match. But you’d lose the person you’re talking with. Because focusing on Jesus instead of always come across like the kind of petty, dangerous tribalism that causes people to commit the evil acts we all deplore.

I'm not saying we can worship Jesus plus any of those things. I'm saying Jesus always stands alone. Let him.

We need to point people to Jesus. But we can’t point others to him if we’re not following him.

No, we’ll never do that perfectly. But we can always do it better.

It’s not about Jesus and us. But there’s nothing more compelling than Jesus in us.

When Evil Strikes: A Christian Answer to 'Isn’t ...