Dear Andy Stanley, Please Be the Small Church's Ally, Not Our Enemy

Home > 2016 > March
Christian UnityMarch 03, 2016
Dear Andy Stanley, Please Be the Small Church's Ally, Not Our Enemy
A plea from the 90 percent about "that" sermon you preached.
by Karl Vaters 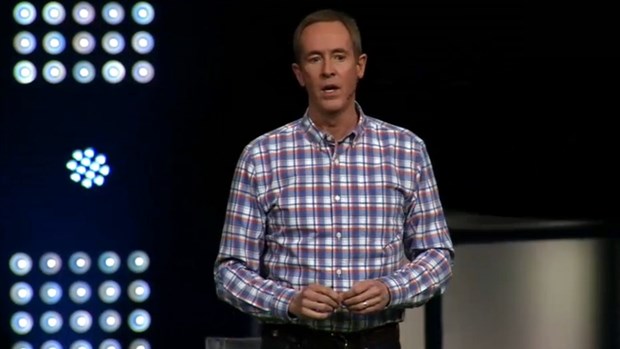 (This post has been updated – twice – with Stanley’s apolog(ies). Scroll down to see them.)

I just listened to a sermon from a guy I like, who insulted me, my church and 90 percent of the churches on earth for no good reason.

For over three years I've been blogging on the value of small churches. I've also written a book about it.

I don't prefer small or big churches. They all have value.

In everything I've written, I've been very careful to state that I don't prefer small or big churches. They all have value. In fact, the subtitle of my book, The Grasshopper Myth is Big Churches, Small Churches and the Small Thinking that Divides Us.

But now Andy Stanley – a guy I like, though we've never met – has engaged in some seriously small thinking by using some of the strongest insults I've ever heard uttered in a public forum against small churches.

Here are the two relevant quotes.

“When I hear adults say, ‘Well I don’t like a big church, I like about 200, I want to be able to know everybody,’ I say, ‘You are so stinking selfish. You care nothing about the next generation. All you care about is you and your five friends. You don’t care about your kids…anybody else’s kids.’ You’re like, ‘What’s up?’ I’m saying if you don’t go to a church large enough where you can have enough Middle Schoolers and High Schoolers to separate them so they can have small groups and grow up the local church, you are a selfish adult. Get over it. Find yourself a big old church where your kids can connect with a bunch of people and grow up and love the local church.”

“Instead… you drag your kids to a church they hate, and then they grow up and hate the local church. And then they go to college and you pray that there will be a church in the college town that they connect with. And guess what? All those churches are big.”

When I heard about this sermon from all the messages that have been blowing up my inbox, I figured the quotes had to have been taken out of context. So I listened to the sermon for myself. Unfortunately, the context didn't help.

Here’s a link to Stanley’s sermon. The quotes in question start at around 15 minutes.

(UPDATE: Shortly after posting this, I saw the following tweet from Andy. “The negative reaction to the clip from last weekend's message is entirely justified. Heck, even I was offended by what I said! I apologize."

Thanks, Andy. That’s a class act.)

(SECOND UPDATE: Stanley has offered even further apologies and explanations in an extensive interview with Christianity Today. Click here to read it.)

We Don’t Need Another (Un)Holy War

I don't want to respond to this. The church has had enough of public spats between ministers on blogs and social media.

But I can't let this one go.

So I'm going to respond. But not with the anger and sadness that I feel over these horrific and inaccurate insults.

I could write half a book outlining how each assumption he made about small churches is wrong. But I won't. Instead, I'll say this.

Andy, I love you.

But you're wrong on this.

You're wrong to insult your fellow churches, pastors, church members and yes, the millions of young people all over the world who love the small churches they choose to attend.

Reaching Out, Not Lashing Out

I don't want you standing against me. And I won't stand against you. So, even though you have insulted so many of us, I say this.

You spoke ignorantly. I've been there, too.

You're not a hurtful person. But those were hurtful statements. You've wounded some of the hardest-working, godliest, most committed servants I know.

I want to lash out. But I won't. Instead, I'll reach out.

Instead, I'll reach out.

I invite you to have a conversation about this subject. With me, or with a group of small church pastors like me.

I invite you to visit the small church I pastor.

I invite you to meet the wonderful teens who not only choose to attend our small church (many without their parents), but you'll see them voluntarily sit in the front row during the main worship service, play and sing on our worship team, teach our children, greet newcomers, worship with abandon and help stack chairs when we're finished.

And I invite you to meet with the college students who don’t realize that, according to your statement, they should want to attend big churches when they leave for college. Come meet these students who have found a home-away-from-home in our small church because we love them, welcome them, and provide them with opportunities to serve that they may not have access to in the big churches.

Many of them were raised in big churches, but they want to experience a small church when they leave home. Small churches can serve young people well, too.

You’ll also meet the wonderful, unselfish older folks who welcome these young people with open arms and hearts. And who teach them how to grow up to be loving, mature Christian adults.

And our church is not the only one like that. Not by a long shot.

But I invite you to ours.

Big Churches and Small Churches Together

We're on the same team, Andy.

We're on the same team, Andy.

So let me close this by quoting you, from the same sermon in question. About five minutes before you started insulting small churches, you said you were grateful to the church because:

“I learned in the local church that I was never to mistreat anyone.”

“I learned in the local church that I was accountable to my heavenly father for how I treated everyone.”

Those are great lessons that the church taught me as well.

And small churches are just as deserving of that kindness as everyone else is.

Andy, you're a good man, a brother in Christ and a powerful communicator.

Please reconsider your statements about small churches and let's work together.

(My post originally had three quotes attributed to Stanley. One was wrongly transcribed and has been removed. I apologize for the error. – KV)