"If people find that controversial then I would just refer them to the Sermon on the Mount, which I think is, in my mind, for my faith, more central than an obscure passage in Romans."
Sarah Pulliam|March 3, 2008 09:06 AM

Democrat presidential candidate Sen. Barack Obama invoked the Sermon on the Mount as a reason for why he supports civil unions during an appearance in Nelsonville, Ohio, on Sunday.

The response came after Pastor Leon Forte, who heads up Grace Christian Center in Athens, Ohio, asked about Obama's faith. The video is available here and the full transcript is available here.

"Your campaign sets a quandary for most evangelical Christians," Forte said. "They believe in the social agenda that you have. They have a problem with what the conservatives have laid out as the moral litmus test about who is worthy and who is not."

Obama responded by saying he is a devout Christian, he prays to Jesus every night and tries to go to church as much as he can.

"I think what you may be referring to, though, when you say controversies, probably has more to do with two issues, which is abortion and gay marriage, which has become, I think, how people measure faith in the evangelical community."

Obama said that while ... 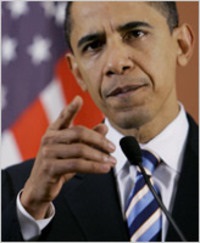