The Obama administration may soften some sanctions against the Sudan government, the Los Angeles Timesreports.

President Obama's envoy to Sudan, J. Scott Gration, said that the Khartoum government has shown a willingness to allow aid to be delivered to the region.

"We see that there is a spirit of cooperation and an attitude of wanting to help," Gration said. ... "There's ways that we can roll back these sanctions in a way that allows us to lift the restrictions we need, such that the government continues to be sanctioned and military equipment continues to be sanctioned," he said.The new approach has sparked fierce debate among Obama's advisors and is causing consternation among some of his strongest supporters, who had expected the president to toughen U.S. policy toward a government that he had sharply criticized as untrustworthy during last ... 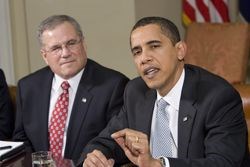