Former House speaker and Newt Gingrich is shooting a documentary about Pope John Paul II's 1979 trip to Poland and how it helped to lay the groundwork for bringing down the Soviet Union, writes Dan Gilgoff of U.S. News & World Report on his God & Country blog.

Nine Days That Changed the World will release this fall under Gingrich Productions. Gingrich also discussed his conversion to Christianity with Gilgoff, saying the influence of popes JPII and Benedict affected him deeply. 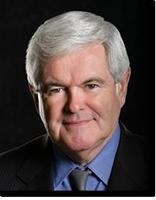