(Editor's note: As of Sept. 5, this posting was revised. We regret the errors in the earlier version.) 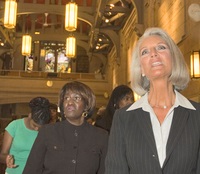 Taking time off from a tour promoting her new book about Abraham, The Magnificent Obsession, Lotz told the men and women at the mission about how she deeply wanted a more vital relation to God.

She asked the audience if they "ever felt left out, felt shut out, that the world has discarded you?"

"Listen to me," she said to the group. "No matter how shut out you are, this is not all there is. There is nothing at all that God won't forgive." (Click here for Time magazine's author interview.)

From the crowd of homeless, some nine individuals came forward during her altar call to pray with Lotz that Jesus would come into their lives.

James Macklin, director of outreach at the mission observed, "I know those guys and the one woman who went up. They are in search of change. Mrs. Lotz's delivery, gently appealing without condemnation—she didn't do it with thunder and roaring but with a gentle spirit. It had an impact on them."

To some people, Lotz doesn't seem to fit the picture of someone who could talk to people from the other side of the tracks.

She seems to be an evangelical princess, the cloistered daughter of Billy and Ruth Graham. She married young to a star basketball player and moved into a comfortable suburban lifestyle. She dresses elegantly and conservatively, favoring pin stripe pant suits with a white blouse, highly polished open back pumps and a single pearl necklace and earrings. In her new book she remarks, "It has been religious people, often within the organized church, who have been the most critical of and even hostile to my relationship with God. It was religious people from the board of deacons who voted to remove my nine-year Bible class from their church facility." In an interview last fall with CT she mused that "I wondered why God hadn't made me a man."

Yet, she was effective at the Bowery.

A key to understanding the empathy that Lotz has with people on the street is to know that one of her favorite childhood books is A Little Princess. In the book a young rich girl gets thrown into poverty and becomes a scullery maid. One Christmas the girl passed a wonderful family gathering with food, presents and a beautiful tree. As her face pressed against the window, she began weeping.

During her address at the mission, Lotz asked the audience if they ever felt like the girl in that early 20th century novel, an outsider looking into another world where people had healthy relationships with God and fulfilling lives.

In interviews with Christianity Today this week, Lotz reflected on her own life. She hadn't gone to college and her family life was good but her relation to God was not all it could be.

She told Time magazine that she felt trapped "in small talk and small toys and small sticky fingerprints." That was about 1974.

Around that time, on a family outing from New York City to Cape Cod, their station wagon blew a tire, the first of four blowouts on that trip. Her mother-in law was "sitting in the back, waiting, and reading to no one in particular about the church in Philadelphia described in Revelation 3." The words of this passage indicate that Jesus holds the key to open and shut the door to God's kingdom and the passage suddenly grabbed Lotz's attention. "They spoke to me." She decided to do something.

At the time, she had been seeking to participate in a local Bible Study Fellowship in order to study God's word more deeply. There were no fellowship classes nearby and no one seemed willing to start one. The doors seemed shut tight. But in the car she decided to knock on the door again. The Bible study ministry eventually agreed to come to her vicinity. She was living in Raleigh, North Carolina.

From the late 1970s until the late 1980s, Lotz was the teacher of this weekly local Bible study group. Also, she was drawn into the lives of hurting people, including criminals serving time in prison.

In the 1980s, the infamous serial killer, Velma Barfield, was waiting on death row when she heard the Gospel message on the radio that she could be forgiven of her sins. She became a Christian. Later, she wrote Ruth Graham, who asked Lotz to contact Barfield. The daughter agreed with trepidation. Barfield's lawyer contacted Lotz. And Lotz was added to the list of people approved to visit Barfield.

"I was so terrified when I arrived at the maximum security prison. My hand shook so much that my signature was just a squiggly line on the registry."

The two women met, and Anne discovered her to be eagerly seeking spiritual insight. They started to bond over prayer and reading the Bible together. Their meetings took place frequently. Barfield became a light in the prison but she was still on death row.

"Even God let Cain off from the death penalty." With this message Anne asked the North Carolina governor to halt the execution. In the midst of a heated senate election Governor Jim Hunt denied the appeal and Barfield was executed by lethal injection in 1984. "I was a state witness to her execution," Lotz observes.

Later, Lotz started a Bible Study Fellowship at the North Carolina Women's Correctional Facility in Raleigh that grew to 300 participants. It is now a weekly Bible study ministry known as Shepherd's Heart.

Periodically, Lotz teaches at this facility. "Last Christmas 220 came to Christ. The leaders of the Bible study are people I trained." This occurred at a luncheon event put on by the men's Bible study that her husband leads.

On Wednesday, Lotz came to the Bowery Mission in part to commemorate another anniversary—her marriage to Danny Lotz of forty-three years. Just before walking into the 100-year-old chapel of the mission, Lotz called her husband, who came to Christ at age 5 in Vacation Bible School, to reminisce about their memories of the Bowery Mission and New York City. Danny's father was a street preacher in the New York City area and preached at the Bowery Mission.

Danny was a very talented basketball player. At age 15, Danny was about to start as a freshman on the high school varsity team. Danny's father told his son he would have to miss the first game because he had agreed to play the trumpet at the Bowery Mission.

Recounting this time, Anne says, "He saw his father preach and the reaction of the men. He was moved." On the way back home, his father pulled off the side of the road, "Danny, you have to decide. Jesus says, ‘Seek ye first the kingdom of God and His righteousness and all these things would be added to you.' "

At that moment Danny knew that for him it had to be Christ first, basketball second. The integrity of his commitment was one of the things that attracted Anne to him some years later. (As it turned out, the basketball chapter finished on a high note since Danny played on the University of North Carolina team that won a national championship in triple overtime against the Wilt Chamberlain team from Kansas.)

So, when Anne spoke at the Bowery Mission, she had a memory, a preparation and presence that was natural.

I asked Lotz about her Dad, who she said was stable. "His spirit is good but he does not have much energy." He has many health challenges but is walking around with a walker and having people read to him. She said Billy talked about how every day he looks forward to seeing Ruth in heaven.

Anne told the audience at the Bowery Mission, "Death is a door. When we close our eyes in this life, we will open our eyes to Jesus."

Tony Carnes is a senior writer for Christianty Today.