The high point of the first full day of the Cape Town 2010 Congress turned out to be a testimony from an 18 year old girl, Sung Kyung Ju. She told how she and her family fled from North Korea when she was six years old. In China, relatives led them to a church where they were exposed to Christianity. But her father, who she said was a ranking North Korean official, was forcibly sent back to North Korea in 2001.

After spending three years in prison, he was allowed to return to his family in China. This time, though, he went back to North Korea voluntarily–in order to witness to the gospel. In 2006 he was caught and imprisoned, and his family has not heard from him since. His daughter said they imagine that he has been executed.

Sung Kyung Ju herself became a Christian when she saw Jesus in a dream. She now hopes to study diplomacy so that ultimately she can play a part in reconciling the country she loves to Christ. "I want to bring the love of God to North Korea," she said, her voice faltering. ... 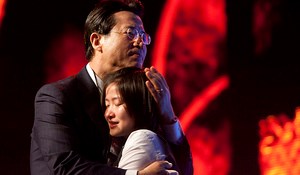