Republican presidential candidate Ron Paul is more than politician. He's a brand. For the past decade he has represented the libertarian movement within the Republican Party, often putting him at odds with hawks and social conservatives. But to win in Iowa, South Carolina, and other early primary states, Paul needs to win over more than fiscal conservatives. Paul's campaign has been recently repackaging his candidacy for evangelical voters, preaching a new political gospel that may resonate with many evangelicals: to save America you need to change the culture, not replace the politicians. 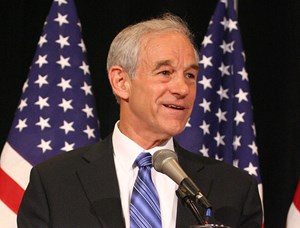 Last week, the Family Research Council's Values Bus tour cruised around Iowa with top Republican contenders including Michele Bachmann, Tim Pawlenty (who dropped out of the race), and Rick Santorum. They spoke to crowds about their social conservative credentials. Paul, however, is not that kind of conservative. Other candidates are social conservatives who want public policy to reflect, defend, and promote morality.

Paul, however, has built his brand as a libertarian who wants government to stay out of regulating pornography, prostitution, drugs, gambling, and other vices that excite social conservatives. He preaches a message of liberty, and that often puts him at odds with Christian conservative groups.

However, Paul's campaign is now reaching out to evangelicals, focusing on how Paul sees libertarianism as reflecting his Christian faith. Senior Paul strategist Doug Wead told Politico that the campaign is actively campaigning to win over evangelical voters.

"The missing link for us, the outreach to evangelicals, which is so key to South Carolina and the south — we're filling it," said Wead.

To do this, Paul is talking about his positions using Biblical allusions and references to doctrine. His speech at this year's Faith and Freedom conference illustrates this approach well:

1) Pass the Abortion Litmus Test. Paul begins his talks to evangelicals with a clear statement on his pro-life position. Paul says that life is the one political value higher than liberty. "As an OB doctor, let me tell you," Paul said, "life does begin at conception."

2) Agree that American Society is Immoral. Paul echoes the social conservative narrative about the change in American society. The problems in American society began in the 1960's with the sexual revolution, the drug culture, and other changes began a decline in morality. Paul's twist, however, is that this is not a reason to enact new laws. Instead, he says that policy reflects morality, so the focus should be on changing the culture, not trying to change society through government.

3) Give Biblical Justifications for Positions. Paul describes his economic views as "biblical economics." He references Old Testament admonishments against false weights and measures as a reason to go to the gold standard and to get rid of the Federal Reserve. He talks about government as a false idol. He recounts the story of Saul as a lesson against the temptation to want a king—which is an all-powerful government—who will steal young people for war and overtax the people.

4) Use Christian Doctrine, Not Constitutional Jurisprudence. Paul opposes most military conflicts that the U.S. has engaged in since World War II. Rather than explaining this position through the language of libertarianism, national self-interest, and the War Powers Act, Paul uses just war theory, which limits military conflict to defense and the protection of innocent lives.

5) Talk about Social Issues that Require LESS Government. Paul opposes the current role of government in education. He favors private schooling and homeschooling, an area where many evangelical GOP voters want less government.

6) Don't Mention Social Issues that Call for MORE Government. He keeps mum on legalization of heroin, pornography, and prostitution.

For others, however, Paul's views toward legalization of drugs and prostitution make him unacceptable as a candidate. Former President George W. Bush speechwriter Michael Gerson wrote in the Washington Post that Paul's libertarian policy positions are based on an unrealistic view of human nature.

"[Libertarianism] is the arrogance of the strong. It is contempt for the vulnerable and suffering. The conservative alternative to libertarianism is necessarily more complex," Gerson said. "Responsible, self-governing citizens … are cultivated in institutions — families, religious communities and decent, orderly neighborhoods. And government has a limited but important role in reinforcing social norms and expectations — including laws against drugs and against the exploitation of men and women in the sex trade."

Publicly, Paul remains reticent about his personal faith, much more so than others in the GOP field of candidates. For instance, you won't find YouTube videos showing him giving his testimony or talking at length about his faith. One of the few windows into his beliefs came during the 2007 Values Voter Debate. Paul was asked, "Tell us about your personal faith and what it means to your life." Paul answered by talking about his belief in God and how it affected his view of the Iraq War.

I get to my God through Christ. Christ to me, is a man of peace. He is for peace. He's not for war. He doesn't justify preemptive declared war. I strongly believe there is a Christian doctrine of Just War and I believe this nation has drifted from that, no matter what the rationals are, we have drifted from that and it's very, very dangerous and I see in many ways being un-Christian.

And to justify what we do in the name of Christianity I think is very dangerous and not part of what Christianity is all about. Christ came here for spiritual reasons not secular war and boundaries and geography. Yet we are now dedicating so much of our aggressive activity in the name of God, but God–-He is the Prince of Peace. That is what I see from my God, and through Christ, I vote for peace.

Later in his 2008 campaign for president, Paul released a letter that gave this statement on his religious beliefs:

I have never been one who is comfortable talking about my faith in the political arena. In fact, the pandering that typically occurs in the election season I find to be distasteful. But for those who have asked, I freely confess that Jesus Christ is my personal Savior, and that I seek His guidance in all that I do. I know, as you do, that our freedoms come not from man, but from God. My record of public service reflects my reverence for the Natural Rights with which we have been endowed by a loving Creator.

That was 2008. This time around, Paul has included a "Statement of Faith" on his campaign website. It is listed as an "issue," along with taxes and homeschooling.

"My faith is a deeply private issue to me, and I don't speak on it in great detail during my speeches because I want to avoid any appearance of exploiting it for political gain. Let me be very clear here: I have accepted Jesus Christ as my personal Savior, and I endeavor every day to follow Him in all I do and in every position I advocate," said Paul in the statement.

The document lists Paul's religious beliefs, a statement that the candidate has a Christian faith. The remainder of the document is as much about the Constitution and freedom as it is about religion.

A Facebook page for "Christians for Ron Paul" points to his 50 year marriage, his family, and his career as evidence of a life practicing family values.

Editor's note: This post has been updated to include Paul's "Statement of Faith."