Land said that his involvement with ICOM was not a promotion of Islam, but he said this was the perception of many ... 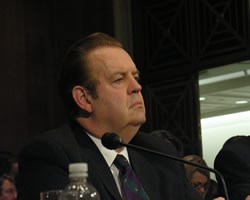