House Speaker John Boehner (R-Ohio) delayed a vote yesterday on  his plan to raise the federal debt limit because he did not have enough votes, according to Politico. Within his own party, freshman and tea party legislators wanted Speaker Boehner to push for more restrictions on spending. From the other side of the aisle, Democrats (including more conservative "blue dog" Democrats) opposed it. Indeed, the only bipartisan cooperation found this week in Washington appears to be an agreement to oppose any compromise on the debt limit. The House could vote on a plan to raise the debt ceiling today.

The plan proposed Boehner would raise the debt limit (enough to cover until around February 2012). The plan is facing strong opposition from both sides of the aisle. 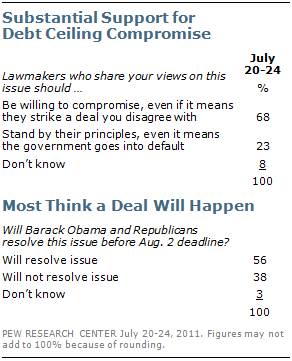