Well, that's hardly breaking news, but a new movie by that title combines surfing and faith
March 1, 2011 06:06 AM

We featured Bryan Jennings, a former surfing star who found Jesus and later founded Walking on Water, a Christian surfing ministry, as our Who's Next subject in the October 2010 issue of Christianity Today.

Part of WOW's ministry includes making films that typical include testimonies from surfers and lots of incredibly cool surfing footage and music. WOW's newest film, titled Walking on Water, releases to DVD today in a special edition version from Sony Pictures and Affirm Films. (Sony and Affirm have also teamed up for Soul Surfer, releasing to theaters next month.)

In Walking on Water, Jennings takes two promising young surfers on a world tour to meet some of the planet's best surfers, to see life in various cultures (including third-world countries), to take part in various outreach ministries, and to experience life in a variety of settings. Jennings himself had taken a similar journey when he was 14; he wanted to "pay it forward" by doing the same for others. This film is that result. ... 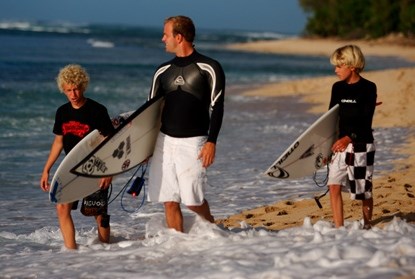