When former quarterback Kurt Warner became an overnight sensation for the St. Louis Rams in the late 1990s, he rubbed a few people the wrong way for his outspoken Christian faith. He says he learned the hard way that he should've been more sparing with his religious rhetoric, and that he should've simply let his actions do most of the talking.

Now he's got the same advice for Tim Tebow, the rising star QB for the Denver Broncos who is also outspoken about his Christian faith. In an interview with the Arizona Republic, Warner said that Tebow should tone it down a bit – maybe even on the "Tebowing."

"You can't help but cheer for a guy like that," Warner told the newspaper. "But I'd tell him, 'Put down the boldness in regards to the words, and keep living the way you're living. Let your teammates do the talking for you. Let them cheer on your testimony.'

"I know what he's going through, and I know what he wants to accomplish, but I don't want anybody to become calloused toward Tim because they ... 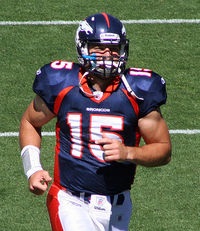