Marking the 50th anniversary of the first broadcast of his Christian Broadcasting Network, Pat Robertson said he will no longer make political endorsements.

"When I was in charge of the Christian Coalition I was available to mobilize grassroots support for somebody," Robertson told The Associated Press in an interview. "I don't have any army right now. It's just an opinion, and that isn't quite as good as it used to be."

Fifty years to the day after his first broadcast on Oct. 1, 1961, Robertson on Saturday recalled his network's humble beginnings in an address to a crowd gathered outside CBN's headquarters in Virginia Beach, Va.

Robertson said his first deposit in the network's corporate account was $3. 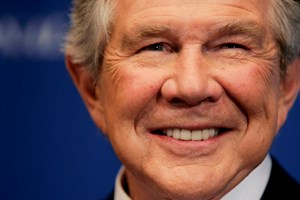