Some groups made arguments on religious freedom while others focused on the individual mandate.
Tobin Grant|March 29, 2012 09:04 AM

The U.S. Supreme Court listened to an unprecedented three days of oral arguments on the constitutionality of the Patient Protection and Affordable Care Act (ACA) after receiving scores of amicus curiae or "friend of the court" briefs from outside groups. While most religious organizations and churches sat this case out, faith-based conservative political groups weighed in with arguments ranging from religious liberty to the legal definition of a "tax."

Alliance Defense Fund (ADF) teamed up with pro-life groups such as Americans United for Life to argue that the act violates the Free Exercise clause of the First Amendment. The ADF coalition argued that the individual mandate would inhibit religious freedom by "effectively forcing" individuals to pay for an abortion premium because they may be enrolled by their employers in plans that cover abortion. The ADF argued that others may be "forced to choose between insufficient plans that respect their conscience versus other plans that happen ... 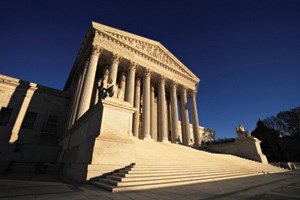 How Faith-based Groups Became Involved in the ...