A majority of pastors continue to doubt man-made global warming, according to a report by LifeWay Research.

The survey found about 4 in 10 Protestant pastors "believe global warming is real and man made" – an increase from similar data collected in 2010, but down slightly from 2008. Pastors' views generally line up with popular opinion on the topic, LifeWay states. The percentage of Americans who said they believed global warming was the result of human activity reached all-time low in 2010, when just 34 percent agreed with the statement.

Younger pastors are the biggest skeptics. "Pastors age 65 or older put more stock in the validity of global warming over their younger counterparts," Lifeway said. "This group is more likely (32%) than pastors age 45-54 (20%) and 18-44 (19%) to strongly agree with the statement: 'I believe global warming is real and man made.'"

Not surprisingly, pastors' perspectives on global warming and sustainability efforts corresponded with their politics: Democrat ... 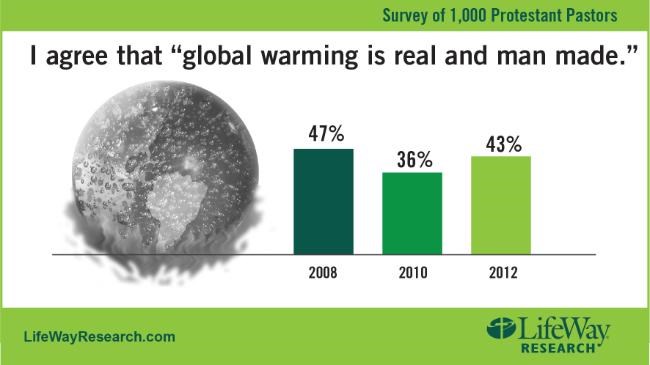