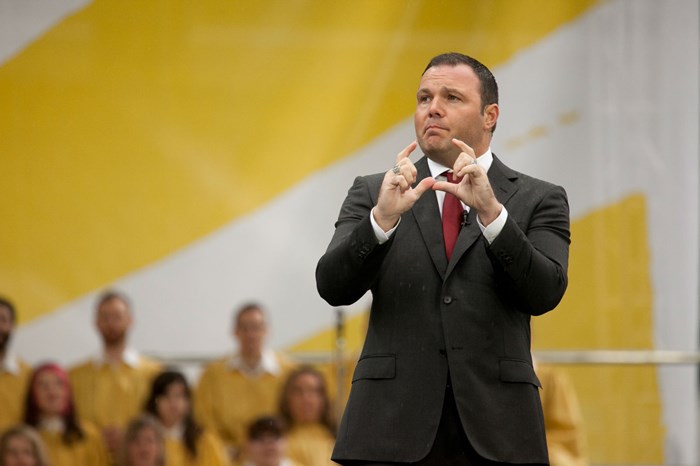 Update (Dec. 10): The employer of Driscoll's research assistant tells CT's Andy Crouch that its "records show that [he] provided Mars Hill all the documentation needed to properly cite the IVP commentary" (CT paraphrase). Crouch weighs in on "the real problem with Mark Driscoll's 'citation errors'—and it isn't plagiarism."

Update (Dec. 9): While one Christian publisher has defended duplicate content found in one of Mark Driscoll's books, another publisher tells CT that its material "improperly appeared without quotation or attribution." In turn, the Seattle megapastor's Mars Hill Church has attributed the "citation errors" to a research assistant.

Plagiarism accusations levied (and later apologized for) by radio host Janet Mefferd against Driscoll first focused on material found in A Call to Resurgence (Tyndale House Publishers), but later expanded to include overlapping paragraphs between Driscoll's Trial: 8 Witnesses From 1 & 2 Peter and InterVarsity Press's New Bible Commentary, edited by D. A. Carson and three others. (While most commentators have connected IVP's 1 Peter chapter to Carson, it was actually written by David H. Wheaton, a vicar in London.)

Tyndale told CT that the questioned material in A Call to Resurgence was "properly cited in the printed book and conforms to market standards." But IVP says the overlap with its Peter commentary was not fair use.

Several paragraphs from the New Bible Commentary edited by G. J. Wenham, J. A. Motyer, D. A. Carson and R. T. France published by InterVarsity Press appear in Mark Driscoll's now out of print book Trial: 8 Witnesses From 1 & 2 Peter. These improperly appeared without quotation or attribution. With proper citation the material would have been a case of fair use.

InterVarsity Press believes all writers should use great care as they do research and prepare texts for any use to make sure that proper acknowledgement is given to source material.

IVP tells CT this will be its final statement on the matter. CT has reached out to Driscoll for a response.

Meanwhile, Patheos's Warren Throckmorton was first to spot Mars Hill's discreet acknowledgement that IVP's material was used in error. In a note explaining the removal of its Trial study guide, the church states:

In 2009, Pastor Mark preached through 1 & 2 Peter in a sermon series called Trial. To help our small groups, a team of people including a research assistant, put together a free study guide that was produced in-house and was never sold. About 5 years later it was brought to our attention that it contained some citation errors. We have discovered that during the editing process, content from other published sources were mistaken for research notes. These sentences were adapted instead of quoted directly. We are grateful this was brought to our attention, and we have removed that document from our website to correct the mistake. Additionally, we are examining all of our similar content as a precautionary measure.

[Editor's note: This post has been corrected to reflect that D. A. Carson did not write the 1 Peter material in question, but was one of four editors for the Bible commentary.]

An apology has finally surfaced in the Mark Driscoll plagiarism debate—but not from Driscoll. So has a resignation—but not from his accuser.

A brief recap, since many materials have now been pulled from the Internet:

Christian radio host Janet Mefferd accused the Seattle megapastor of plagiarism in his new book, A Call to Resurgence, during a November 21 interview. She later posted photographic evidence as she expanded her accusations to a Driscoll commentary on 1 Peter and 2 Peter.

Religion News Service's Jonathan Merritt has the best recaps of what's been said on all sides. Driscoll has largely remained mum, as have the two men he is accused of pilfering paragraphs from: Peter Jones of truthXchange, and Reformed theologian D. A. Carson. [Update: Carson was one of four editors, but did not write the material in question.]

It has come to our attention that a radio talk show host has suggested that author Mark Driscoll has committed plagiarism in his recent Tyndale book, A Call to Resurgence. Tyndale House takes any accusation of plagiarism seriously and has therefore conducted a thorough in-house review of the original material and sources provided by the author. After this review we feel confident that the content in question has been properly cited in the printed book and conforms to market standards.

On Wednesday, Mefferd publicly apologized for her approach, telling her listeners:

Before we go to break, I just want to say something really, really quickly to you. A few weeks ago, as many people know, I conducted an interview with Pastor Mark Driscoll. And I received lots of feedback on that interview, both positive and negative, but I feel now that in retrospect, I should have conducted myself in a better way. I now realize the interview should not have occurred at all. I should have contacted Tyndale House directly to alert them to the plagiarism issue. And I never should have brought it to the attention of listeners publicly. So I would like to apologize to all of you and to Mark Driscoll for how I behaved. I am sorry.

Unfortunately, I also didn't anticipate that the story would go viral online the way it did and creating such dissension with the Christian community was never my aim. And so in an effort to right things as best as I can, I have now removed all of the materials related to the interview off my website, and also off my social media.

Mefferd also took down her posted evidence, though the blog Another Slice recreates the alleged passages at issue from A Call to Resurgence, Trial: 8 Witnesses From 1&2 Peter, Real Marriage, andWho do You Think You Are?.

I was a part-time, topic producer for Janet Mefferd until yesterday when I resigned over this situation. All I can share is that there is an evangelical celebrity machine that is more powerful than anyone realizes. You may not go up against the machine. That is all. Mark Driscoll clearly plagiarized and those who could have underscored the seriousness of it and demanded accountability did not. That is the reality of the evangelical industrial complex.

The comments have since been taken down. Merritt is trying to find out more.

Meanwhile, observers are more concerned about the overlaps with material found in InterVarsity Press's New Bible Commentary than with Jones's material. Houston Baptist University's Collin Garbarino would flunk Driscoll for his lack of citation. Warren Throckmorton thinks Driscoll has "some explaining to do." By contrast, Christian Piatt criticized the "witch hunt," saying Driscoll "deserves better." Miles Mullin says the whole thing highlights "one of the problems with the personality-based leadership that encompasses most of American evangelicalism."

CT's previous coverage of plagiarism includes plagiarism accusations faced by Richard Land during the Trayvon Martin case. Land lost his radio show over his comments, and later announced his retirement as president of the Southern Baptist Convention's Ethics and Religious Liberty Commission.

CT has also reported on how plagiarism among pastors helped spark a new code of ethics from the National Association of Evangelicals, as well as how a former Bush aide repented after his 2008 plagiarism scandal.