New Barna research suggests Catholics more likely to withdraw from church, but Protestants more likely to have doubted their faith.
Melissa Steffan|February 21, 2013 10:04 AM

The increasing number of young church dropouts isn't just a Protestant problem. According to new research from the Barna Group, "65 percent of Catholic-raised young adults say they are less religiously active today than they were at age 15."

Of the 1,550 people surveyed (all of whom were Catholics and Protestants who were raised in church or reported identifying as Christian at some point), Catholics reported lower levels of church-faith tension than Protestants in every category except one: 65 percent of Catholics said they are less involved in church now than they were before, compared to only 59 percent of Protestants (full infographic below).

For a Catholic church in transition, that's a key statistic. Barna president Dave Kinnaman says millennial church dropouts need to become "a high priority among Catholic church leaders... Being effective among Millennials requires understanding what makes them tick, which includes knowing how the church's teachings and positions on key social issues ... 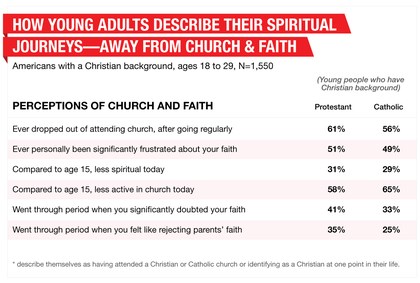 The Differences (Or Lack Thereof) Between Young ...