According to new data from LifeWay Research, only 37 percent of Americans believe that homosexual behavior is a sin—down 7 percent from similar data collected just over a year earlier.

LifeWay president Ed Stetzer says President Barack Obama's "evolution on homosexuality probably impacted the evolution of cultural values–there is a real and substantive shift, surprisingly large for a one-year timeframe%mdash;though this was hardly a normal year on this issue."

LifeWay's previous research showed that 44 percent of those surveyed said they believe homosexual behavior is sinful. And while the results from the organization's November 2012 survey of nearly 1,200 people show the overall percentage of those who approve of homosexuality has more or less remained the same, the percentage of Americans who are unsure ... 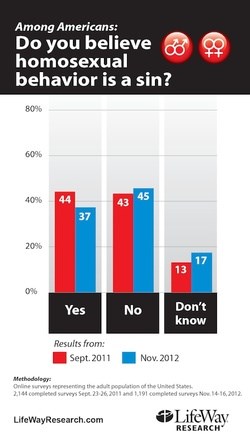