Back-and-forth columns prompt one analyst to do the (hypothetical) math.
Melissa Steffan|May 29, 2013 11:54 AM

The New York Times's lone conservative, Catholic columnist Ross Douthat sparked a debate about God, guns, and suicide last week with his column about loneliness and the sharp rise in suicides over the past several decades.

Sean Trende, a senior analyst for Real Clear Politics (RCP) picked up on the original exchange between Douthat and The New Republic's Nate Cohn, who argued–contrary to Douthat–that the rise in suicides is not related to declines in either marriage rates or religiosity. Douthat and Cohn were starting to discuss the role of population density in suicide rates when Trende interrupted with his own analysis.

"Once you control for gun ownership, religiosity does have a statistically significant relationship with suicide," wrote Trende.

In other words, a state or society with high religiosity and no gun ownership is likely to see the fewest suicides per 100,000 residents.

Trende 'ran the hypothetical numbers,' so to speak, and came up with the following data: 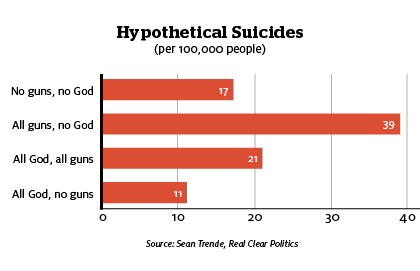