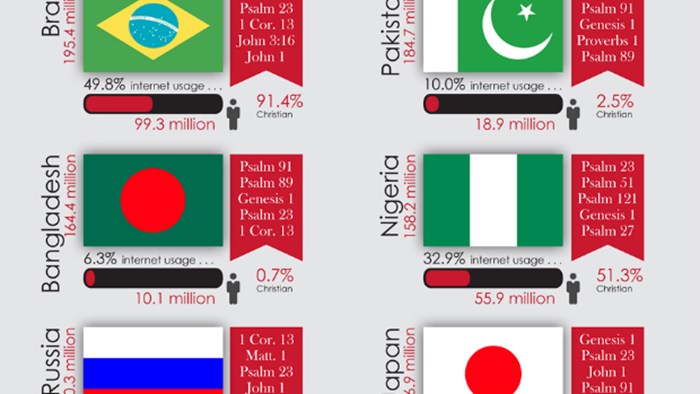 Which Bible verses are searched for most often in the world's 10 most populous countries? Psalm 23, Genesis 1, and 1 Corinthians 13, according to the world's leading Bible website.

Yet China, India, the United States, Indonesia, Brazil, Pakistan, Bangladesh, Nigeria, Russia, and Japan each search the Bible differently, according to a new study of 2013 visits to BibleGateway.com in conjunction with GMI. [Infographic below]

Psalm 23 appeared in the top five searches in nine of the 10 countries, followed closely by Genesis 1 in eight of the 10, and 1 Corinthians 13 in seven of the 10. When looking for a book of the Bible, people begin at the beginning: "Chapter 1" appears in more than 30 percent of Bible Gateway's searches. (CT previously reported that John 3:16 topped the list of searches for individual verses in 2013.)

Two of the four "implications of the search for truth" noted in the study: Are pastors and missionaries preaching too much from Paul? Too little from the Old Testament?

The leading Bible website reports that people from 92 percent of the world—242 countries or territories—spent more than 76 million hours in 2013 "searching, reading, studying, comparing, and sharing the Bible in their own languages." Almost one-third of the site's came from outside the United States.

The only overlap between the top 10 countries that visitors came from—the United States, United Kingdom, Canada, Australia, Mexico, Philippines, Colombia, Singapore, and South Africa—and the 10 most populous countries was the United States.

And even though John 3:16 took first in the list of searches for an individual verse, it only appears in four of the 10 most populous countries' top five searches: the United States, Indonesia, Brazil, and India.

Pakistan, Nigeria, and Bangladesh rank No. 8, No. 14, and No. 48 respectively on Open Doors' World Watch List. The Pew Research Center also ranked the most populous countries and their levels of religious hostility.

CT has previously noted the Bible verses YouVersion shared most in 2013, as well as how the top 100 searching cities in the U.S. compare to the top 100 believing cities.