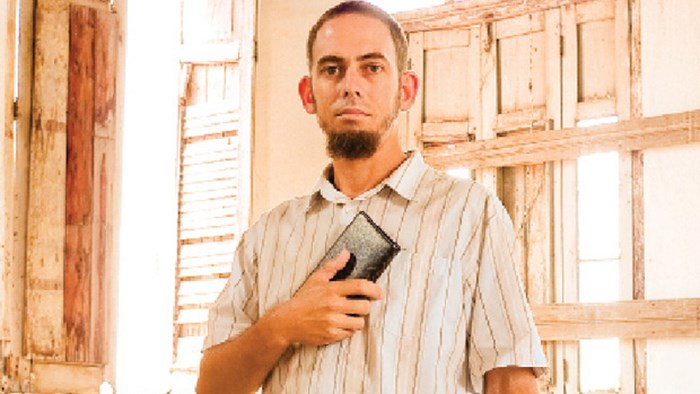 Travel keeps getting easier for Cuba's surging Christian community even as practicing their faith keeps getting harder. Case in point: Mario Felix Lleonart Barroso, a Cuban Baptist pastor who once appeared on CT's cover and has since become a Bonhoeffer-inspired activist blogger.

Last fall, Lleonart Barroso made an unusually high-profile trip to Washington, D.C., visiting the Congressional Caucus on Religious Freedom and issuing a 30-point challenge to his Communist government. Last weekend, he found his house in central Cuba surrounded by security police, according to Christian Solidarity Worldwide (CSW).

Security agents quickly seized the pastor as his wife and two children watched from inside the house. They held him in detention until night time, after which he was returned home and placed under house arrest. [He discusses his detention in Spanish here.] In a sign of the times, his wife Yoaxis has been live-tweeting their house arrest.

Lleonart Barroso, pastor of Ebenezer Baptist Church in Taguayabon, has been an outspoken voice against the Cuban government's mistreatment of pastors and human rights defenders for at least four years. CT interviewed him during a 2009 Holy Week road trip on Cuba's improbable Christian revival and how Cuban Christians have more freedom yet are not free.

During the detention, authorities took prints of his fingers and toes, a scent sample, and DNA samples from his nails and teeth by force. He refused to sign an Official Warning (Advertencia Oficial), which is often used as evidence in the Cuban judiciary system.

According to CSW, the pastor's sister, Mirka Pena, remarked that the arrest of Lleonart Barroso is "part of a larger crackdown on political dissidents across the country ... in anticipation of the Community of Latin American and Caribbean States (CELAC) summit, due to take place this week in Cuba."

Lleonart Barroso is gaining support from U.S.-based Baptists, who helped sponsor his first visit to America last September. Utilizing social media, he communicates with his supporters as well as further drumming up awareness for a pro-democracy Cuba. His Twitter account is regularly updated with up to 10 tweets a day. He has also blogged his experiences (sometimes translated into English) since 2010. His wife Yoaxis is also active on Twitter.

His self-description from his blog:

Inspired by the paradigmatic example of the Confessional German Churches which rose during the dreadful Nazi period, and by one of their most sublime expressions—the passion of Dietrich Bonhoeffer—I also stand over the gash which is the broken bridge of my village which carries an indigenous name: TAGUAYABON. And I stand here to DENOUNCE the causes which contaminate its water, which is scarcer by the day, and to ANNOUNCE rivers of live water, because Jesus came to bring good news to the poor. (Luke 4.18-19).

The pastor has faced setbacks before. In 2012, CSW reported that Lleonart Barroso suffered rib injuries during a two-hour imprisonment for helping a human rights defender obtain medical treatment after being beaten by authorities.