A 'near totality' warn U.S. evangelicals (and others) against becoming too friendly with the Catholic Church.
Sarah Eekhoff Zylstra|July 30, 2014 12:27 PM 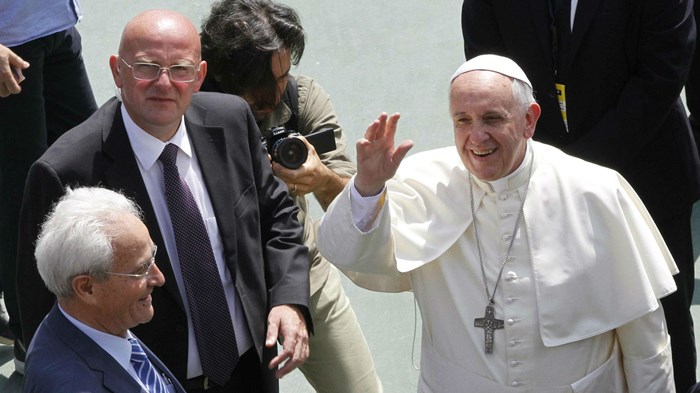 He acknowledged the remarkable nature of his visit, saying: "Someone will be surprised: 'The pope went to visit the evangelicals?' But he went to see his brothers."

Pope Francis urged Christians to celebrate their unity and their diversity, the latest in a string of ecumenical overtures toward Protestants. Religion News Service has more details, as does the Boston Globe. The outgoing leader of the World Evangelical Alliance (WEA), Geoff Tunnicliffe, responded with his own apology for past Protestant discrimination against Catholics. One Italian pastor wrote on RealClearReligion that "relations between Christian confessions are undergoing a shake-up."

But many Italian evangelicals are "increasingly puzzled" by the positive reaction of evangelicals in the United States (and other countries) to the new pope.

"There is much naiveté and superficiality," wrote Italian church planter Leonardo De Chirico in a blog post. "Some analysis is based on personal impressions or the seemingly evangelical language of the pope, or on truncated bits of information that fall short of taking notice of the complexity of Roman Catholicism."

An overwhelming majority of Italy's evangelical churches and organizations—including leaders for the Italian Evangelical Alliance (IEA), the Federation of Pentecostal Churches, and the Assemblies of God in Italy—agree with De Chirico (or at least did so before the pope's apology). On July 19, they signed a statement that provided "biblical standards to assess the mounting ecumenical pressure coming from the Roman Catholic Church to expand its catholicity at the expense of biblical truth."

This is the first time such a near consensus of Italian evangelicals has agreed on Catholicism, according to Stefano Bogliolo, press office head for the Italian Evangelical Alliance. Bogliolo noted that the churches and groups that endorsed the statement represent a "near totality of evangelicals" who hold to conservative Protestant theology and strong evangelistic commitments.

The statement (full text below) stresses that "it is incompatible with the teaching of Scripture to have a church that operates as mediator of salvation and that presents other figures as mediators of grace since God's grace comes to us by faith alone in Jesus Christ alone (Ephesians 2:8) and without the agency of other mediators (1 Timothy 2:5)."

Church leaders also note that "What appear to be similarities with the Evangelical faith and spirituality of sectors of Roman Catholicism are not in themselves reasons for hope in a true change."

This isn't the first time Italian evangelicals have raised a red flag. After WEA leaders met with Pope Francis in June, the Italian Evangelical Alliance stated that there were "insurmountable" doctrinal obstacles with the Catholic church, and asked the WEA for a "clarification on the inside line to take against Roman Catholicism."

Brian Stiller, the WEA's global ambassador, explained the rationale behind the meeting:

I know some will wonder if we lack discernment, dining as we did with the head of a church many see as heretical. ... No one is interested in rewinding the clock. Also to construct a united church isn't doable and neither is it in our interest. Such plans do not lead us to fulfill Jesus' prayer in John 17 that we be one in Christ.

My counter argument to those who might dismiss friendship with the pope is this. For Evangelicals and Protestants, of all shapes and sizes, the state and condition of the Roman Catholic Church matters. Of the over 2 billion Christians, one-half are linked to the Vatican. ... In places where Evangelicals are marginalized, having this official connection allows us to raise issues and ask for responses we would never otherwise get.

Meanwhile, a historical theology professor at Regent University cautions that views among Italian Protestants toward Catholics are more mixed than the joint statement implies. De Chirico's intrepretation "does not do full justice to the complexities of Italian evangelicalism and its history with the Catholic Church," writes Dale Coulter at First Things. He advises:

CT often reports on Catholicism and on Pope Francis, including his recent meeting with freed Sudanese Christian Meriam Ibrahim, five things worth cheering in the pope's plan to change the Catholic Church, and the value of confession.

Full text of statement by Italian evangelicals (including IEA preface):

Defining it "historical" may be an overstatement. However, what happened on 19th July is a landmark in the 150 years of Italian Evangelicalism. For the first time ever, nearly 100% of Italian Evangelical churches and bodies (85% of Italian Protestants) signed a common statement reinforcing the Evangelical commitment to the Gospel of Jesus Christ also by providing biblical standards to assess the mounting ecumenical pressure coming from the Roman Catholic Church to expand its catholicity at the expense of biblical truth. It never happened before that such a large consensus was achieved and that Italian Evangelicals spoke with a single voice on such a crucial topic. The Italian Evangelical Alliance is glad to have facilitated the process that led to this historic event and looks forward to seeing this renewed sense of Evangelical unity being further nurtured. The churches and bodies that endorsed this statement represent the near totality of Evangelicals who have a conservative Protestant theology and a strong evangelistic commitment.

Following a round table promoted by the Italian Evangelical Alliance, the Federation of Pentecostal Churches, the Assemblies of God in Italy, the Apostolic Church, and the Pentecostal Congregations held in Aversa on 19th July 2014 at the Pentecostal College of Religious Sciences on the topic of "Roman Catholicism in Evangelical Perspective," the above mentioned churches and bodies, being alerted by the recent ecumenical openings by national and international evangelical and Pentecostal circles with regards to the Roman Catholic Church and its present-day pontiff, without passing judgment on the faith of individual people, believe nonetheless that it is incompatible with the teaching of Scripture to have a church that operates as mediator of salvation and that presents other figures as mediators of grace since God's grace comes to us by faith alone in Jesus Christ alone (Ephesians 2:8) and without the agency of other mediators (1 Timothy 2:5).

They also believe that it is incompatible with biblical teaching to have a church that took the liberty to add dogmas (such as the Marian dogmas) to the faith once and for all delivered to the saints (Jude 3; Revelation 22:18).

They also believe that it is incompatible with the teaching of Scripture to have a church whose heart is a political state that is a legacy of an "imperial" church from which it has inherited titles and prerogatives. Christian churches must refrain from imitating "the princes of this world" and follow the example of Jesus who came to serve and not to be served (Mark 10:42-45).

Furthermore they also believe that what appear to be similarities with the evangelical faith and spirituality of sectors of Roman Catholicism are not in themselves reasons for hope in a true change.

All the standing theological and ethical differences considered, they cannot initiate nor advocate for ecumenical initiatives with regard to the Roman Catholic Church.

They invite all evangelicals at the national and international levels to exercise a healthy biblical discernment (1 John 4:1) without falling into unionist initiatives that are contrary to Scripture and instead renew their commitment to take the gospel of Jesus Christ to the whole world (Matthew 28:18-20).