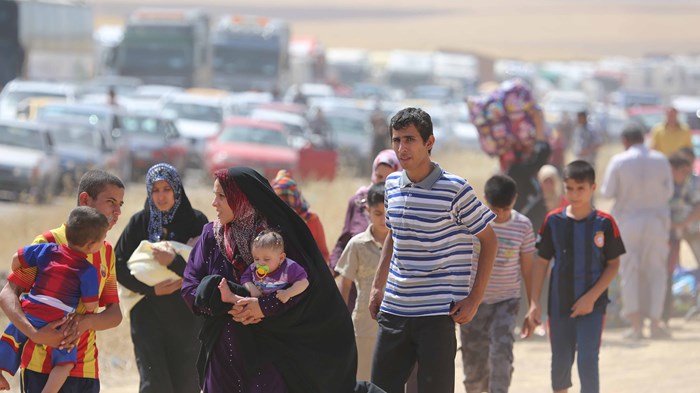 Thousands of Christians have fled Iraq's second-largest city as an Islamist terror group solidifies its control over Christianity's main remaining stronghold in the struggling nation.

The Islamic State of Iraq and the Levant (ISIS), an Iraq and Syria-based Sunni offshoot of al-Qaeda, took over Mosul (pop. 1.8 million) earlier this month, the BBC reports.

Most of Mosul's remaining Christian population of 3,000 fled for safer areas, according to World Watch Monitor.

All of Iraq is under a state of alert, according to the Iraqi government. Mosul itself is in a state of "anarchy," with armed patrols on the streets and families holed up in homes. During the takeover, everything collapsed suddenly and "people entered without any problems or opposition," Msgr. Shimoun Emil Nona, Chaldean archbishop of Mosul, told AsiaNews.

"Things are so bad now in Iraq, the worst they have ever been," writes Canon Andrew White, vicar of St. George's Anglican Church in Baghdad. "The Islamic terrorists have taken control of the whole of Mosul which is Nineveh the main Christian stronghold. The army [has] even fled. We urgently need help and support. … We are in a desperate crisis."

ISIS, which wants to overthrow the Iraqi and Syrian Governments and establish a Sunni caliphate in the Middle East, took military advantage of a political power vacuum as Iraqi Prime Minister Nouri Maliki struggles to form a government after recent elections.

The region ISIS invaded has been a stronghold for Iraqi Christians, Middle East Concern reports:

Mosul and the surrounding Nineveh plain is the traditional heartland of Iraq's Christian communities. Many Christians fled to this region when forced to leave Baghdad and other areas in recent years. Christians are alarmed at the ISIS take-over of Mosul, fearful that this will further accelerate the decline of the Christian presence in Iraq.

Iraq's Christian population has shrunk in recent years from 1.2 million in the early 1990s to an estimated 300,000 before the most recent attacks. Christian refugees are fleeing to surrounding areas and as far away as Europe, where CT previously reported on resettlement efforts. Displaced Christians within Iraq face high unemployment, poor housing, and difficulty finding education and medical care, according to Open Doors International's 2014 World Watch List.

Christians are fleeing severe violence targeting them, including church attacks, killings, robberies, and rapes, and the Christian population in Mosul shrunk from 35,000 to 3,000 in the past decade. In the last week, the remaining Christians fled, according to World Watch Monitor, which analyzes the reasons behind the exodus.

In late February, ISIS invaded Raqqa in northern Syria and demanded that Christians pay a "jizya" tax and accept a list of regulations, including not ringing church bells or praying in public in exchange for "protection," the BBC reported. That memory makes Christians even more wary now, Middle East Concern reports:

Christians feel particularly vulnerable, especially in light of the treatment of Christians in the Raqqah province of northern Syria where ISIS has also established its authority. Recall that, in February 2014, ISIS commanders in Raqqah forced Christian community leaders to sign a contract agreeing to a set of stringent conditions. These included the payment of a special tax (known as jizya), conduct of Christian rites only behind closed doors so as to be neither visible nor audible to Muslims, and adherence to Islamic commercial, dress code and dietary regulations.

"These defenseless religious communities are facing an existential crisis, which threatens their very survival in the lands they have inhabited for centuries," said Wolf, a longtime religious freedom advocate who helped create the U.S. Commission on International Religious Freedom (USCIRF) in 1998. "The faith leaders … recognize that unless the American church begins to champion this cause, the foreign policy establishment will hardly lead the way. They are committing to be their 'brother's keeper,' whether in Nineveh, Cairo or Homs."