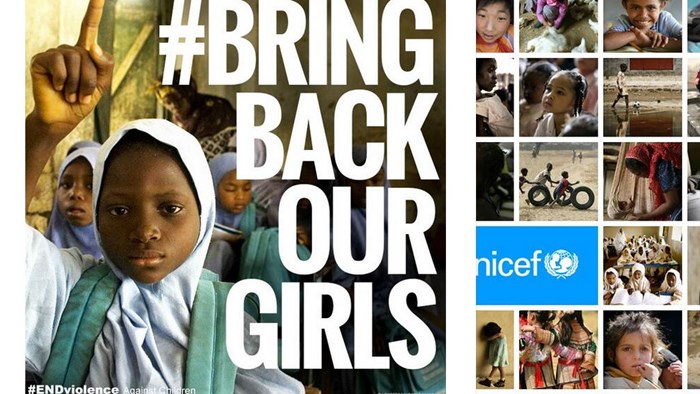 Update: Joining the international condemnation of the Boko Haram kidnapping: Egypt's Al-Azhar. "Given that it is one of the oldest Sunni institutions and is highly respected throughout the Islamic world and particularly in Africa, Al-Azhar's intervention constitutes an authoritative and significant riposte to Boko Haram's claims of divine sanction," notes Christian Solidarity Worldwide.

International outcry over last month's kidnapping of more than 200 Nigerian schoolgirls during final exams has grown large enough to make terrorist group Boko Haram a trending topic on Twitter. But even as efforts like "#BringBackOurGirls" gain steam, few of the students have been found.

The kidnappings occurred April 14, when the girls were taken from the predominantly Christian town of Chibok in the predominantly Muslim state of Borno. An estimated 50 of the teenage girls have since escaped. Now, media reports indicate that Boko Haram, which has killed an estimated 1,500 people so far this year, has taken the girls into the neighboring countries of Chad and Cameroon where they risk forced marriages and human trafficking.

The Christian Association of Nigeria (CAN) recently released the names of 165 Christian girls and 15 Muslim girls it says were kidnapped from Chibok. Many are affiliated with the Church of the Brethren. Meanwhile, the overall number of abducted girls has risen past 275, according to The New York Times, because reports of girls taken from other schools were slower to surface.

On Monday, the kidnapping took a more sinister turn when a leader of Boko Haram—Abubakar Shekau— released a video declaring:

"I abducted your girls…There is a market for selling humans. Allah says I should sell. He commands me to sell. I will sell women."

Barnabas Aid reports militants in Cameroon are paying the equivalent of 12 USD for one of the girls. Pogo Bitrus, leader of the Chibok Elders Forum, called the buying and selling of the girls for marriage a "medieval kind of slavery."

Meanwhile, people have taken to the streets and social media to protest for the safe return of the kidnapped girls. Protesters marched at the National Assembly in Nigeria's capital Abuja where two leaders were arrested, while "#BringBackOurGirls" and "Boko Haram" are both trending on Twitter.

CAN has asked for prayer and fasting for the safe returns of the girls, but also wants more action from state and federal government leaders, reports World Watch Monitor. Over the weekend, President Goodluck Jonathan gave the Borno governor marching orders to find the abducted girls.

Nigeria's democracy is being tested by recurring sectarian violence, attacks and threats against Christians by Boko Haram, and the misuse of religion by politicians, religious leaders, and others.

CT regularly reports on Nigeria and Boko Haram, including when the militant group officially became the world's newest terrorist organization in November, and lately has been one of the most violent. Nigeria—currently No. 14 on the World Watch List for severe Christian persecution—declared a state of emergency as Christians debated amnesty for Boko Haram.

CT also regularly reports stories of kidnapping, including the Christmas Eve kidnapping of one of Nigeria's top Christian leaders.

Here is the Borno section of Open Doors's report on gender-based violence in Nigeria:

Maiduguri, the Borno state capital is reputed to be the birth place and the headquarters of Boko Haram. More than 70 attacks have occurred in Maiduguri alone and such attacks are still ongoing. Several others attacks have taken place in Bama, Ngobolu-Ngala, Dikwa among other local government areas. Due to severe onslaught, including the killing of unsuspecting travellers by Boko Haram when NPVRN visited Maiduguri, it was pretty difficult and simply unsafe to go the hinterlands for interviews. Several people were interviewed including security personnel, members of the civilian JTF, NGOs, Christian women's organizations, Christian religious leaders and some prominent journalists. Most of them pleaded to remain anonymous and were not ready to confirm their personal experiences.

However, at least seventeen of the almost two hundred Christian women victims interviewed confirmed they were captured, tortured and raped. The type and degree of GBV committed directly by Boko Haram members tilted towards abduction and rape. Abduction, generally referred to as capture in Maiduguri is 55%, while rape is 55%. This is understandable because Borno is where the conflict is most intense and many Boko Haram leaders are located there. Second, as earlier indicated, Abubakar Shekau, the leader of Boko Haram, cited the arrests of the wives and children of Boko Haram members in 2012 as one of Boko Haram's reasons for violence against Christian women and children. Analysts suggest this may likely be personal because the more than 100 women and children detained by the security forces in 2012 included Shekau's wife, the wife of the commander in Kano, the wife of the commander in Sokoto, who gave birth while in prison and the wife of the vehicle suicide-bomber who attacked ThisDay media house in Abuja [84].

Other categories of GBV included forced marriage, 5%; destruction of businesses and shops belonging to Christian women, 15%; torture of Christian women, 55%; attempts at conversion, 5%; and the killing of Christian women, 25%. Other analysts argue that these figures could be higher if people can have access to victims and most of the remote areas under the control of Boko Haram.

Other atrocities include threats and the capture of Christian women for ransom. In some instances, Christian women are under pressure to dress in hijab like their Muslim counterparts in order to be less susceptible to GBV. The ideological motivation for these atrocities are based on the ultra-Salafi form of radicalism that are sometimes opposed by some few moderate Muslims in Nigeria. However, why the GBV of capture, torture and rape are pronounced in Borno is because the state is the enclave of Boko Haram where they operate with impunity, unlike in Taraba or most parts of Adamawa states.