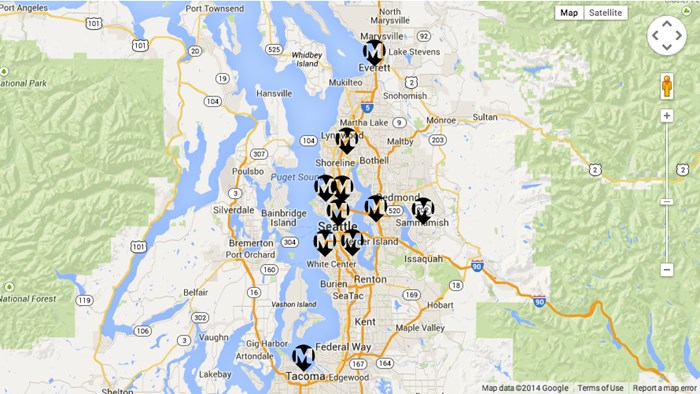 Founded in 1996, the Seattle-based megachurch planted 15 satellite sites across five states, its passion for creating new churches further evidenced by Driscoll founding the Acts 29 network. By New Year's Day, the multisite organization and the Mars Hill name will be no more.

"Rather than remaining a centralized multi-site church with video-led teaching distributed to multiple locations, the best future for each of our existing local churches is for them to become autonomous self-governed entities," Dave Bruskas, primary teaching pastor, announced today to the Mars Hill family. "This means that each of our locations has an opportunity to become a new church, rooted in the best of what Mars Hill has been in the past, and independently led and run by its own local elder teams."

In the aftermath of Driscoll's surprise resignation, the lead pastor of each current site has three options to choose from by January 1:

Meanwhile, Mars Hill as an organization will dissolve in four steps:

(1) All of Mars Hill’s existing church properties will either be sold, or the loans on the individual properties will be assumed by the independent churches, subject to approval by the lender
(2) all central staff will be compensated for their work, and then released from their employment
(3) if any funds remain after the winding down and satisfaction of Mars Hill business affairs, they will be gifted as seed money to the newly independent churches
(4) the existing Mars Hill Church organization will be dissolved

"Ultimately, the success of this plan, and the future viability of each of these new local churches," wrote Bruskas, "rest solely on all of us continuing to be faithful in supporting Jesus’ mission through our attendance and continued giving."

Additional coverage can be found at the Seattle Post-Intelligencer and The Olympian.

In September, the Seattle Times reported that Mars Hill would be consolidating its downtown Seattle and University District congregations with its Ballard site. It also suggested that the church’s Phoenix and Huntington Beach sites were also threatened, adding that church leaders blamed the restructurings on financial pressures stemming from negative media coverage.

Bruskas’s announcement concludes a tumultuous month for Mars Hill in which the charismatic and polemic Driscoll resigned after nearly two decades in leadership. Driscoll, 44, had faced mounting criticism over church leadership and discipline within Mars Hill, as well as how he wrote and promoted his popular books.

The decision came less than two months after Driscoll stepped down from leadership while the church investigated charges against him. Earlier in August, he had been removed from the Acts 29 church planting network.

In a statement, the church's board of overseers accepted his resignation, but emphasized that they had not asked Driscoll to resign and were surprised to receive his letter.

They concluded Driscoll had “been guilty of arrogance, responding to conflict with a quick temper and harsh speech, and leading the staff and elders in a domineering manner," but had "never been charged with any immorality, illegality or heresy. Most of the charges involved attitudes and behaviors reflected by a domineering style of leadership.”

The board—composed of longtime members Michael Van Skaik and Larry Osborne as well as business leaders Jon Phelps and Matt Rogers (who were added after popular evangelical speaker Paul Tripp and Harvest Bible Chapel’s James McDonald resigned over the summer)—also added that many of the formal charges that had been levied against him were “altogether unfair or untrue.”

In his resignation letter (initially obtained and reported on by Religion News Service), Driscoll noted that the board’s investigation into the formal charges against him had ended last Saturday, saying he “had not disqualified [himself] from ministry.”

“I readily acknowledge I am an imperfect messenger of the gospel of Jesus Christ. There are many things I have confessed and repented of, privately and publicly, as you are well aware,” Driscoll wrote, alluding to themes of previous apologies. “Specifically, I have confessed to past pride, anger and a domineering spirit.” Driscoll also said the past year had not only taken a toll on his family’s health, but had also left them “physically unsafe at times.”

CT has reported on Driscoll's apologies for the steady stream of controversies over the past few years, including crude, 14-year-old comments he made in a church forum that resurfaced in the blogosphere in recent months.

“In the Internet age, Mark Driscoll definitely built up the evangelical movement enormously,” Tim Keller told the NYT's Michael Paulson in an August front-page article. “But the brashness and the arrogance and the rudeness in personal relationships—which he himself has confessed repeatedly—was obvious to many from the earliest days, and he has definitely now disillusioned quite a lot of people.”

Last November, Driscoll was accused of plagiarism after duplicate content was spotted in several of his books—claims which his publisher, Tyndale House, defended. In March, the pastor also admitted to paying a public relations company $200,000 to bump his books to The New York Times bestseller list, though Driscoll later apologized for the agreement and voluntarily retracted his bestseller status. Over the summer, LifeWay Christian Stores stopped selling his books.

Since starting Mars Hill in 1996, Driscoll rose quickly to prominence in one of the country’s most secular regions and later across the United States. The outspoken Reformed pastor founded Acts 29 (which he led until March 2012) and the Resurgence, a well-known ministry website and conference.

Over the years, Mars Hill expanded to 15 sites across five states and enjoyed a large online platform: In 2010, more than 7 million sermons were downloaded from its website. Driscoll co-authored Real Marriage with his wife Grace and was known in Donald Miller’s spiritual memoir Blue Like Jazz as the “cussing pastor.”