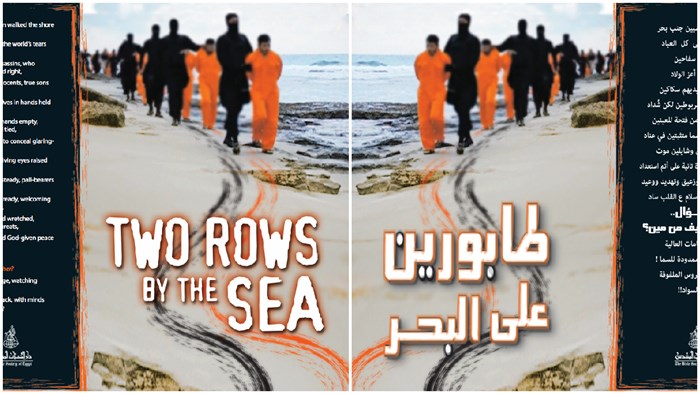 Image: Bible Society of Egypt
Covers of the English and Arabic tracts.

Undaunted by the slaughter of 21 Christians in Libya, the director of the Bible Society of Egypt saw a golden gospel opportunity.

“We must have a Scripture tract ready to distribute to the nation as soon as possible,” Ramez Atallah told his staff the evening an ISIS-linked group released its gruesome propaganda video. Less than 36 hours later, Two Rows by the Sea was sent to the printer.

One week later, 1.65 million copies have been distributed in the Bible Society’s largest campaign ever. It eclipses even the 1 million tracts distributed after the 2012 death of Shenouda, the Coptic "Pope of the Bible." [A full English translation is posted at bottom.] 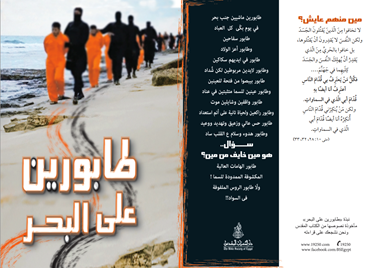 The tract contains biblical quotations about the promise of blessing amid suffering, alongside a poignant poem in colloquial Arabic:

Who fears the other?
The row in orange, watching paradise open?
Or the row in black, with minds evil and broken?

“The design is meant so that it can be given to any Egyptian without causing offense,” said Atallah. “To comfort the mourning and challenge people to commit to Christ.”

The Bible Society distributed the tract through Egypt’s churches, but one congregation went a step further. 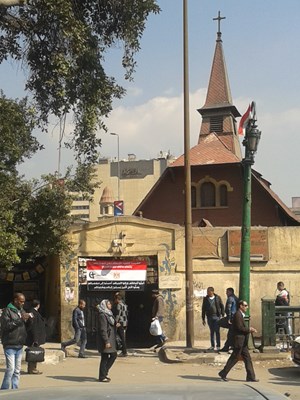 Isaaf Evangelical Church, located on one of downtown Cairo’s busiest streets, hung a poster on its wall at eye-level with pedestrians. “We learn from what the Messiah has said,” it read over the background of an Egyptian flag. “‘Love your enemies, do good to those who hate you….’”

Pastor Francis Fahim said the poster was meant to express comfort to all Egyptians, Muslim and Christian.

As CT reported on Thursday, the beheadings by the Islamic State in Libya have resulted in unprecedented sympathy for Egypt’s Christians, who are increasingly finding common identity across denominational lines. The martyrdoms have also allowed Copts a platform to witness to the realities of their faith, as they publicly forgave the terrorists.

But their testimony may come with risk. Prior to the beheadings, the Muslim Brotherhood’s Freedom and Justice Party speculated on its website that the Copts may have been abducted because they were evangelizing.

The claim was baseless, but CT examined similar 2013 accusations leveled against Christians in Libya in the wake of the first modern-day Coptic martyrdoms outside of Egypt. In the detainees' possession was devotional material meant for the substantial community of Coptic migrant workers. 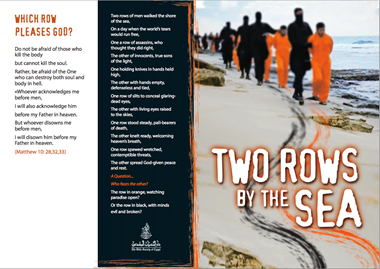 The new Two Rows by the Sea tract underscores how openly Christian material circulates in today's Egypt. Consider what can be found at the Arab world’s largest book fair, which draws 2 million visitors each year.

Amid the hundreds of booths at the 46th Cairo International Book Fair, held January 28 to February 12, the call of the gospel resounded from two microphoned sideshow barkers.

“The Injeel for a pound,” one announced, advertising the cut-rate price of the Arabic New Testament for the equivalent of 13 cents.

“And a free gift for every visitor,” cried the other, offering a DVD of the Jesus film to every curious observer.

The booth belonged to Spiritual Service for Publishing (SSP), a Cru affiliate and one of two authorized distributors of the Jesus film in Egypt. They occupied a prominent central wing of the fair, alongside at least a dozen other Christian publishers.

“There has been a great response to our presence at the fair,” said Henain Ibrahim, SSP's administrative director. “Though we do not target Muslims, as the great majority in Egypt it is natural they have been the majority of our customers as well.”

By the end of the fair, SSP had sold more than 7,000 New Testaments and given away more than 17,000 copies of the Jesus film.

“Following our two revolutions [January 25, 2011 and June 30, 2013], the relationship between Muslims and Christians has improved,” he said. “Muslims have begun to want to know more about Christianity. We are here openly, there are no problems, and people are coming.”

But what is new is their boldness. After the removal of the Muslim Brotherhood from power, Christians have experienced an unprecedented visibility in the public square. And the free availability of the Jesus film stands in stark contrast with other recent censorship decisions.

In December, Egypt banned the film Exodus: Gods and Kings, citing the historical inaccuracy of portraying the Jews as builders of the pyramids. Last month, the government restricted foreign publications deemed "offensive to religion" in the wake of the Charlie Hebdo controversy.

Since starting in 1969, the Cairo Book Fair has been home to significant controversy—sometimes promoting freedom of thought, sometimes restricting it. Protests are common.

This year’s fair was calm, as Egypt’s government is keen to end the chaos of the revolutionary years. Ibrahim said a handful of people tried to disturb visitors to the SSP booth, warning them from accepting handouts. But security officials quickly moved them away.

But security officials also asked him to shut off the microphones, and keep distribution within the booth. Ibrahim complied. Some had started to grumble, and the local press was mixed in its reactions.

In general, the distribution of Christian books and videos is accepted in Egypt as long as the materials do not address Islam directly and are not distributed outside of designated bookshops.

“Some feel the freedom in Egypt allows them to express themselves without restraint,” said Atallah. “But this should be tempered by wisdom to ensure the long-term welcome for Christians.”

Because Christians are not completely free, some push against the limits while others seek to minister prudently within them. Both approaches were employed among participants at the fair.

The Bible Society, which offers 700 products, has participated in the fair since 1996. Its newest offering is a coffee-table book of the Sermon on the Mount.

“Our goal is to make the Scriptures accessible to both unchurched Christians and interested Muslims,” Atallah said, describing the latter as a "significant minority" of their customers. “But we are more accountable to all the churches than others who are registered as private businesses or are in parachurch ministry.”

While Christians in Egypt welcome their newfound favor, Atallah issues caution. The freedom they currently enjoy is neither complete nor fully secure.

“The price of keeping Egypt free from the Islamists has been at the expense of the newly acquired human rights,” he said. “Though the vast majority of Egyptians supported this ‘war’ on Islamist extremists, it did mean that the only way to do it was to return to a police state run by the army.”

Atallah remains optimistic, but measures his words carefully. The book fair is an opportunity, and the Islamic State killings have united society. Gospel tracts find welcome today, while Brotherhood books are banned. But only two years ago, Brotherhood president Mohamed Morsi opened the book fair. The pendulum can swing both ways.

“We have been here 130 years,” Atallah said of the Bible Society, which recently opened its 15th branch in Egypt. “We want to be around another 130, and make the Bible available to whoever wants it.”

[Below are the Bible society tracts in English and Arabic.] 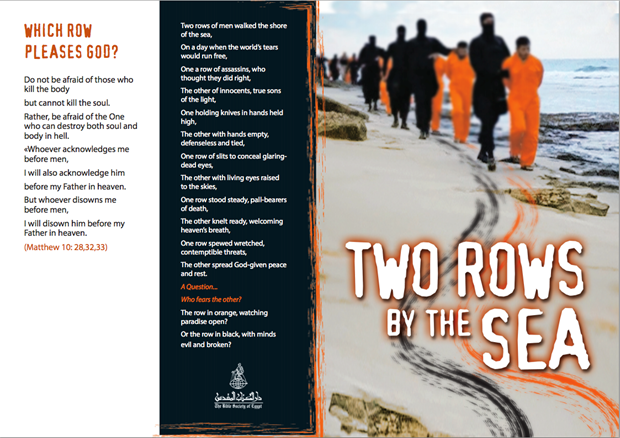 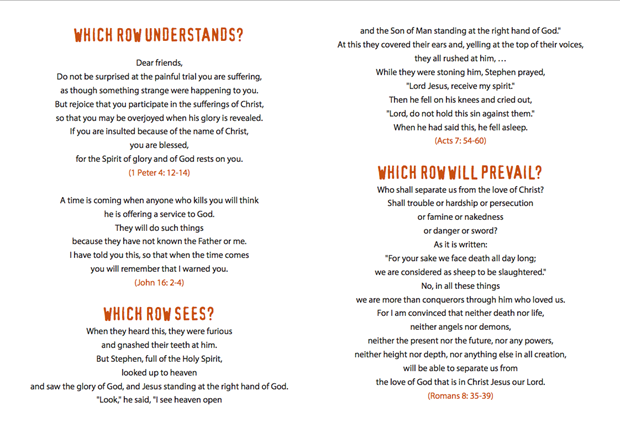 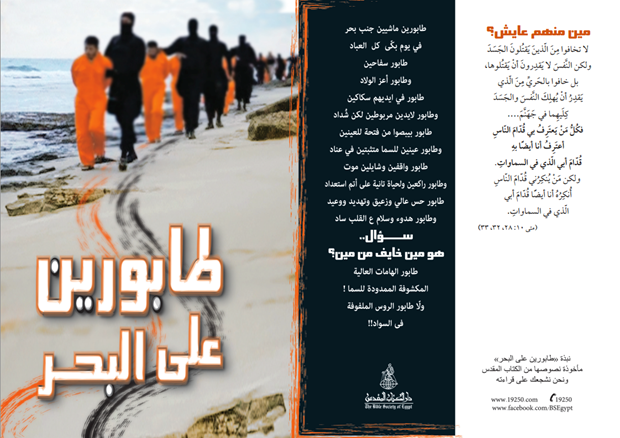 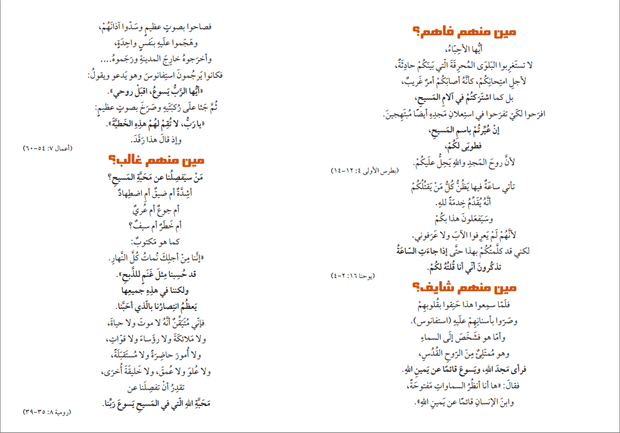