Giving USA and Gallup find new records in opposite directions.
Morgan Lee|June 24, 2015 12:34 PM
US Churches Receive Less Trust Yet More Money Than Ever

Americans may be losing their religion, but they’re still willing to fill up the collection plate.

A new report from Giving USA found that Americans gave a record $114.9 billion to religious groups last year, a 2.5 percent increase in current dollars (and a 0.9 percent inflation-adjusted increase from 2013). Religious groups received a third of total giving by Americans—the largest share of any sector.

Overall, Americans gave more in 2014 in inflation-adjusted dollars than they have since Giving USA began tracking numbers 60 years ago.

Included in that total is the more than $11 billion given to Southern Baptist churches—roughly three times as much as America’s largest charity, the United Way.

That’s despite recent reports showing a rise in the number of Americans who could care less about faith.

Still, many Americans are skeptical about organized religion.

The latest poll from Gallup found that only 42 percent of Americans say they trust churches and other religious groups. That’s down 13 points from the historical average of 55 percent in past Gallup polls. The previous low, 44 percent, came in 2012.

However, organized religion still ranked No. 4 among trusted institutions, performing better than the medical community (37%), banks (28%), and Congress (8%). 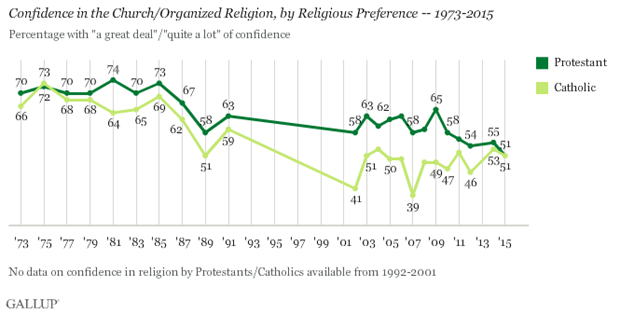 Giving USA did note that while organized religion still receives the largest share of donations, the size of its share continues to decrease:

While the overall growth is indicative of robust philanthropy to a wide spectrum of nonprofits and, thus, of all boats rising with the tide, we would be remiss to gloss over what is happening with giving to religion. Although 2014 donations reached a new high of $114.90 billion, and, as always, accounted for the largest percentage of donations, the fact is, this category is continuing its 30-year dramatic downward slide as a share of total giving. In fact, it has dropped from 53 percent of all donations in 1987 to 32 percent of the total in 2014.

This month, the Evangelical Council for Financial Accountability (ECFA) announced the "very positive" preliminary findings from its 2015 State of Giving Report. Charitable contributions to its more than 600 accredited members rose 5.9 percent in 2014 compared to 2013 (or 4.3% adjusted for inflation), and total revenue for its members rose 4.2 percent.

CT recently examined how more giving is going to parachurch groups, not churches, and explored whether splitting your tithe between the church and other organizations is stealing from God.

CT has also looked at where evangelicals give and no longer give, whether evangelicals are stingy and pastoral knowledge of what congregants give.