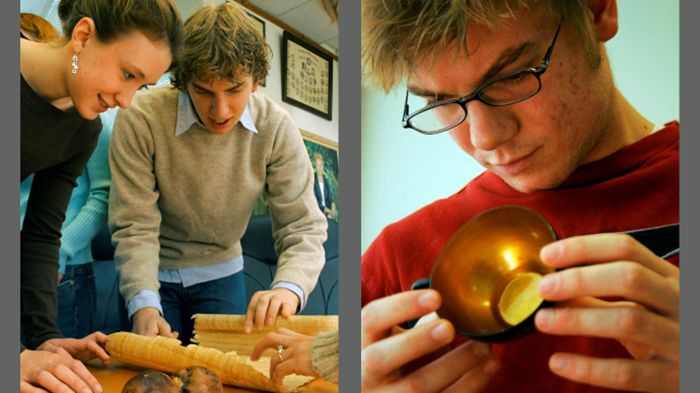 More than 90 years ago, Gordon College was given 7,000 rare books and artifacts by the family of Edward Payson Vining, a railroad executive and amateur Shakespearean. The collection included early parchments of the Greek New Testament, the first edition of Martin Luther’s German Bible, and copies of the first Bibles printed in the Americas in a Native American dialect.

Unable to properly care for the large donation (proper facilities and security would cost between $500,000 and $2 million), Gordon has decided to put about 500 books up for auction. Two of the items are first and second editions of a Bible printed in the Massachusett language in the mid-1600s, according to Gordon spokesperson Rick Sweeney. The news has drawn coverage from the Boston Business Journal and the Associated Press.

“The college has always lacked a proper facility to care for and protect many of these items. And since we are not a museum or a research institution, we also lacked the staffing and facilities to host external researchers,” Sweeney told CT. “As the total cost for building and staffing such a facility was explored, the college’s leadership determined that restoring and preserving the rarest items in the collection would be prohibitively expensive, and drain resources from the core educational mission of a liberal arts college.”

The Boston Globereported that Vining’s great-granddaughter and some Gordon faculty oppose the sale. It also reported that a key donor, Dale Fowler, was threatening to withdraw a $60 million donation. (The college's Wenham campus was renamed for Fowler and his wife, Sarah Ann, in response to the gift.)

"It's absolutely not true," Sweeney told CT. "I spoke to Dale Fowler directly about this."

Fowler told Sweeney that he spoke with the Globe about financial matters, but didn't know anything about "these books" until he saw the article.

"It didn't even come up," Sweeney said. Fowler told him "there are no plans at this time to withdraw the bequest," which the school will receive after Fowler and his wife pass away.

Neither the college nor the Vining family can find the original gift bequest that might record any restrictions regarding sale of the books. But the exchange is documented in a 1953 book by then-president Nathan R. Wood. A School for Christ notes:

The Gordon Trustees made it the Edward Payson Vining Memorial Library, the gift of Charles and Annabel Vining Otis of New York, by the following action on October 7, 1921: "Voted to accept the library on the understanding that the library shall be retained intact as a memorial to Edward Payson Vining and that no material change shall be made in its contents which would affect its material or sentimental value."

Because of these meeting minutes, the auction requires approval from the state attorney general’s office, Sweeney said. “The administration is not seeking a change in the intent of the gift, simply a reallocation of a portion of the resources in order to maintain the rest of the collection.”

Last fall, Gordon trustees authorized the college to explore the sale of approximately 10 percent of the collection, said Sweeney.

“We do not know the total amount of the proceeds that the sale will generate, but it is our hope that the proceeds will cover the essential costs that the collection's care will require—now and in the future—through an endowed fund," he said. There are no plans to sell additional items in the future.

No date has been set for a sale, and the college is not under any deadline.

Selling 10 percent to be able to “preserve and maintain the larger 90 percent” is the “best way to honor the larger intent of this collection,” Sweeney said. Gordon will sell the books that it cannot appropriately care for, he said, noting that some of the books have “languished in boxes” in Gordon’s library for nearly a century. “[Proceeding with the sale] is much more in line with our educational mission and what we believe is ultimately better stewardship of the collection.”