If Christian broadcaster Stendal goes on trial in Colombia, missions work nationwide may be at risk.
Deann Alford and Timothy C. Morgan|March 23, 2015 07:38 AM 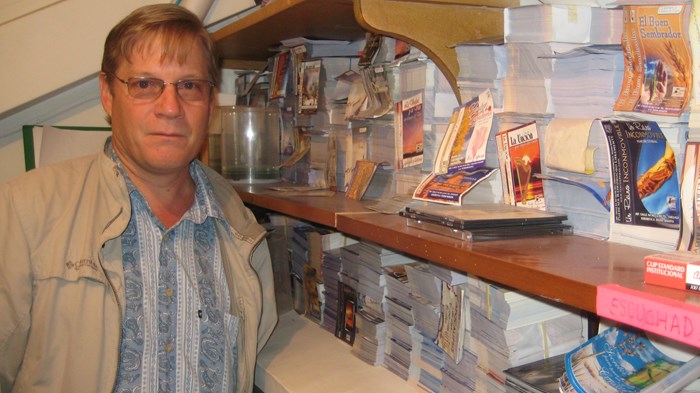 Image: Deann Alford
Russ Stendal in his library in Colombia.

That question is before a three-judge panel, based on allegations from Angel Manuel Castillo Padilla, chief sectional prosecutor for the Colombian department of Cundinamarca, which includes the capital, Bogota. Stendal denies any allegation of leadership in FARC (Revolutionary Armed Forces of Colombia). He said in a recent Facebook video, “Somebody set a trap for me, and I walked into it. They are accusing me of rebellion for the missionary trips and visits we have made to conflict zones distributing Bibles and radios.”

If a terrorism trial does occur, Christian leaders believe it has potential to harm missionary outreach across the nation, still suffering from decades of violent conflict and narco-terrorism. Since 2012, peace talks in Cuba have been accompanied by declines in violence, but more than 80 FARC cells, or “fronts,” are active in trafficking and violence. Two days ago, officials with the U.S. Drug Enforcement Agency confiscated five tons of cocaine aboard a boat headed for the United States.

Stendal has become famous in North and South America for his high-risk evangelistic broadcasts to terrorists. Chip Anderson, chief executive of Christ For the City International, which does urban ministry in Colombia, said a trial of Stendal “would not only cause chilling effects on U.S. missionaries, but also on national missionaries and churches.” CFCI, like many other US-based mission agencies, deploys large numbers of indigenous leaders to achieve ministry goals. “I would hope that the government would recognize [Stendal’s ministry] is a positive influence against terrorism in the country.”

Last month, a Bogota judge threw out Castillo’s charges against Stendal, but Castillo has opted to appeal the action to a three-judge tribunal. Castillo alleges that Stendal is “alias El Gringo,” a FARC leader who controls hundreds of guerrillas. Castillo alleges that Stendal’s radio station network, Garita Radio, which blankets Colombia with the gospel, is for the use of guerrillas to communicate with each other. If convicted of the single charge of rebellion, Stendal, 59, could face 15 years in prison.

Stendal provides all sides in Colombia’s civil war, including guerrillas, with Bibles and solar-powered Galcom radios fix-tuned to Stendal’s stations.“I am a gringo,” Stendal told Christianity Today. “I don’t need an alias.” The real alias El Gringo, Stendal said, is alias Zarco Aldinever, who allegedly operates the 26th, 51st, and 53rd fronts of the FARC.

In addition, police subcommander Victor Gomez pointed to Stendal’s trips to Havana, where the peace talks are in process, as evidence of his support of the rebel movement. Gómez claimed that Stendal served as a messenger/facilitator for the FARC. Stendal denies this.

Before the trial, prosecutor Castillo told the media that his case against Stendal was solid. “He claims to be a missionary, but we don't know of what cult or religion he is.”

Following the Feb. 19 dismissal, a Colombia-based journalist reported the judge harshly rebuked the prosecution and police for bringing the charge. The allegation is based on the testimonies against Stendal of four jailed demobilized FARC guerrillas. Those individuals are seeking sentence reduction or reward money. The court testimonies had many contradictions and inconsistencies. Stendal said that the accusers each tried to extort $100,000 from him, threatening to denounce him to the district attorney’s office. After Stendal refused, the four carried out their threat.

In the February hearing, Stendal and his defense team stressed that high-ranking Colombian military authorities have been aware of—and approve of—Stendal’s missionary and humanitarian efforts in the wars zones and of his meeting with the FARC guerrillas, paramilitaries, government troops, campesinos.

Stendal’s roots in Colombia go back to his 1960s childhood when his family moved to Colombia to serve with Wycliffe Bible Translators. As an adult, Stendal founded the Colombia for Christ Society following his harrowing 1983 kidnapping by FARC guerrillas. They held him for more than five months until an anonymous donor paid his ransom.

The experience led him to write his first book Rescue the Captors, which details his ordeal during which he witnessed the spiritual darkness and despair permeating the guerrilla camp and the emptiness of the Marxist political doctrine. The book also reveals the guerrillas’ receptivity to the gospel.

Through the decades since Stendal’s kidnapping, the FARC leadership has promoted and reassigned some guerrillas who held him hostage. The FARC named one of them, Noel Pérez, to take part in peace talks with the Colombian government in Havana, Cuba, that launched in November 2012. Pérez has since professed faith in Christ.

But Anderson said, “The FARC has been no friend to the churches in the area where it’s operated. They've killed our pastors. They've made orphans out of our pastors children. Why would we want to help them? We want them to change—to change allegiance to God.”

“We trust the judicial system of Colombia. We see that the Colombian government has worked to bring peace to its people, and we appreciate that.”

Colombia has 66 US Protestant missionary agencies working in country. Evangelicals are growing at a rate of 6 percent per year, three times higher than the overall population growth rate. New Tribes is the largest U.S. agency in country with about 50 US and indigenous missions personnel.

Stendal noted that the courts have not set a date for the appeal, “but if they do not do it by April 10 or so, they forfeit.”