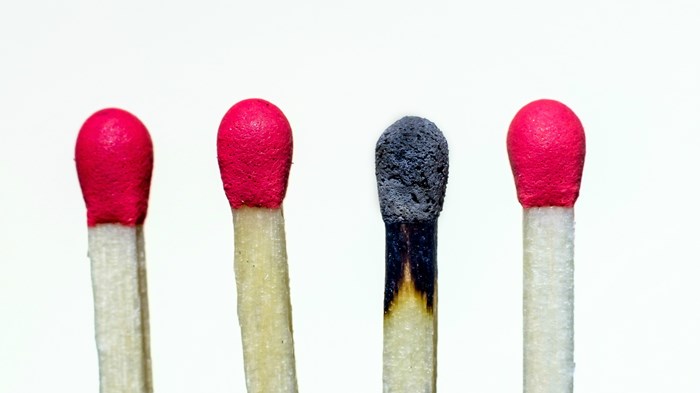 Though pastors are stressed by overwhelming ministry demands and low salaries, only one percent abandon the pulpit each year.

In a first-of-its-kind study, LifeWay Research surveyed 1,500 pastors of evangelical and historically black churches and found an estimated 13 percent of senior pastors in 2005 had left the pastorate 10 years later for reasons other than death or retirement.

"Pastors are not leaving the ministry in droves," said vice president Scott McConnell.

Still, pastors say the role can be tough: 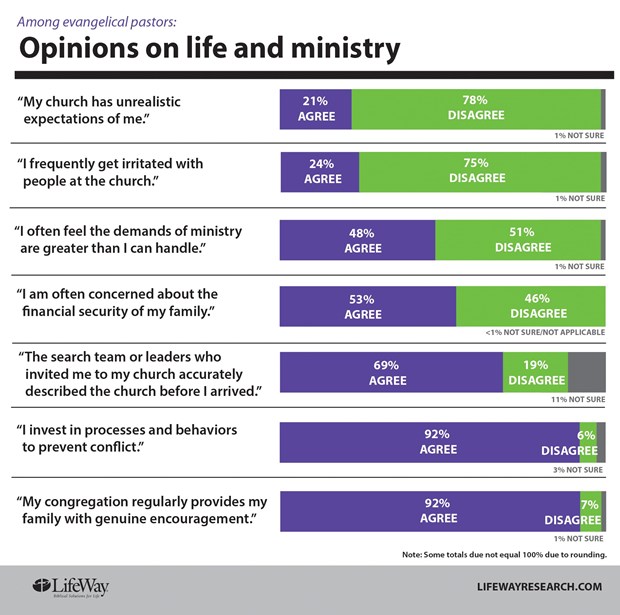 The survey, commissioned by the North American Mission Board (NAMB) and Richard Dockins, an occupational medicine physician in Houston concerned about pastoral attrition, also examined why pastors leave the ministry and what can be done to support pastors.

The last decade of church leadership has been relatively stable, pastors report. Just under half (45 percent) of pastors have the same job they had 10 years ago. Another 12 percent say the pastor who led their church in 2005 now leads another church. Another 10 percent of pastors who were working in 2005 have retired, and 3 percent have died.

Small segments have left the pastorate: two percent shifted to non-ministry jobs, and five percent stayed in ministry but switched to non-pastoral roles. Combined, those two groups account for known losses of less than one percent a year. 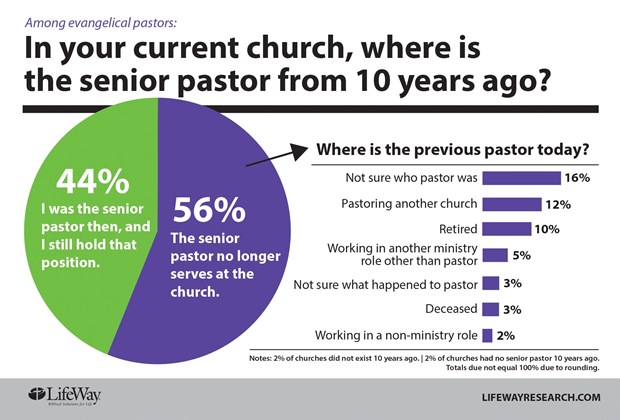 In some cases, pastors didn't know who led the church 10 years earlier (16%) or weren't sure of the previous pastor's whereabouts (3%). Assuming those cases follow the same pattern as the known instances, McConnell estimates that a total of 29,000 evangelical pastors have left the pastorate over the past decade, an average of fewer than 250 a month.

Current pastors say a change in calling is the top reason their predecessors left the pastorate, accounting for 37 percent of departures. Conflict in the church—something 64 percent of pastors experienced in their last church—is the No. 2 reason at 26 percent.

Many senior pastors are relatively new to their current churches—35 percent have been there 5 years or less—but most are not new to the pastorate. More than half (57%) of current senior pastors previously held that role elsewhere.

Most said they moved on because they had taken the previous church as far as they could (54%). However, 23 percent of pastors who changed churches say they left because of conflict in the church. 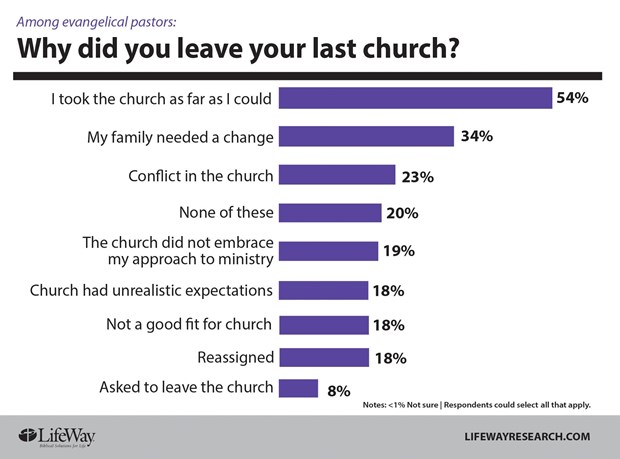 Church conflict takes on multiple forms, including significant personal attacks against 34 percent of pastors. Pastors also reported conflict over changes they proposed (38%), their leadership style (27%), expectations about the pastor's role (25%), and doctrinal differences (13%). Meanwhile, 38 percent faced conflict with lay leaders, and 31 percent found themselves in conflict with a church matriarch or patriarch.

More than a third of pastors (34%) say they left a previous church because their family needed a change. One in five found the church did not embrace their approach to pastoral ministry (19%). Pastors also cited poor fit and unrealistic expectations (18% each) as reasons for leaving. Some were reassigned (18%) or asked to leave (8%).

"Each pastor I talk to agrees that there are increasing demands placed on his life and family today," said Michael Lewis, NAMB executive director for pastor care. "Healthy pastors with growing family relationships are empowered to lead healthy congregations that reach their communities."

The demands of ministry require pastors to protect themselves, they say. And they do: 94 percent consistently protect time with their family, 92 percent make deliberate efforts to prevent conflict, and 9 in 10 regularly listen for signs of conflict in the church.

Although they typically work on others' traditional day of rest, 85 percent of pastors say they unplug from ministerial duties at least one day a week. The majority (59%) find seven or more occasions a week for private Bible study and prayer, unrelated to preparing sermons or lessons.

Self-protection is also warranted when counseling, said Adam Mason, minister of counseling services for Houston's First Baptist Church. "It's almost always the minister beginning the process of counseling a person of the opposite sex and the emotional support that they give each other through the counseling process that leads to an inappropriate physical relationship."

More than three-quarters of pastors say that they have another staff member present when counseling those of the opposite gender (78%), and they refer people to a professional counselor if the situation requires more than two sessions (76%). Most have been trained in counseling, taking graduate school courses (52%), attending conferences (64%), and reading books or articles (90%).

For their own emotional well-being, pastors say they openly share their struggles at least once a month with a source of support such as their spouse (90%), a close friend (74%), another pastor (71%), or a mentor (42%).

Although 1 in 5 pastors said the search team didn't accurately describe the church during their candidacy, most said they knew what they were getting into. Some pinpointed shortcomings in their churches that make a pastor's role more challenging:

"If you're at all in a position of influence in a church, there are practical things you can be doing to help," said McConnell. "Is there a document that clearly defines what the pastor's job is? That's a basic need a church could meet in the next two weeks. Does the church have a sabbatical policy? That's something you can put in place in a matter of a month."

Despite the stress, 92 percent of pastors say their congregations regularly encourage their family.

H.B. London, pastor to pastors emeritus at Focus on the Family, summarized: "For a pastor and his family to know that 1) the leadership is praying for them, 2) they affirm them, 3) they encourage them, and 4) they recognize the work that is being done—those are things that give a pastor hope or give a pastor a sense of being wanted."

The phone survey of pastors of evangelical and black Protestant denominations was conducted March 5-18, 2015. The calling list was a random sample, stratified by church membership and denominational groups, drawn from a list of all evangelical and black Protestant churches. Each interview was conducted with the senior pastor, minister, or priest of the church called. The completed sample is 1,500 pastors. Responses were weighted by region and denominational group to more accurately reflect the population. The sample provides 95 percent confidence that the sampling error does not exceed plus or minus 2.7 percent. This margin of error accounts for the effect of weighting. Margins of error are higher in sub-groups. The study was sponsored by the North American Mission Board and Richard Dockins, M.D.