More pastors are open to LGBT people serving in their churches than being married there, LifeWay finds.
Bob Smietana - Facts and Trends|August 18, 2016 10:00 AM 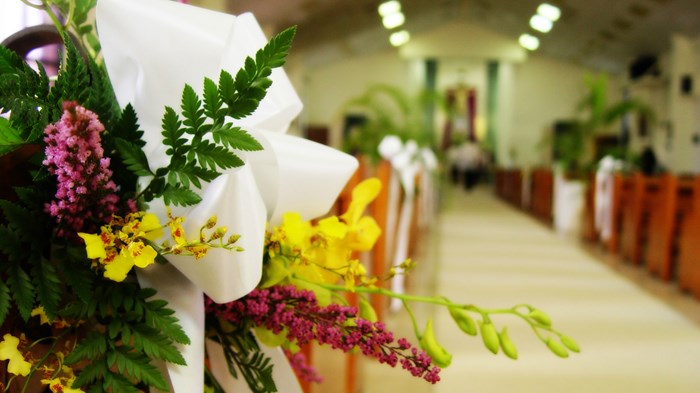 More than 120,000 same-sex couples have tied the knot since the Supreme Court legalized gay marriage nationwide last year. (The number of American weddings in 2014, by comparison, was more than 2.1 million.)

Baptist pastors (1%) are the least likely to say they were asked to perform a same-sex wedding. Presbyterian/Reformed pastors (26%) are most likely. Lutherans (19%), Methodists (9%), Christian/Church of Christ (7%), and Pentecostals (6%) fall in between. 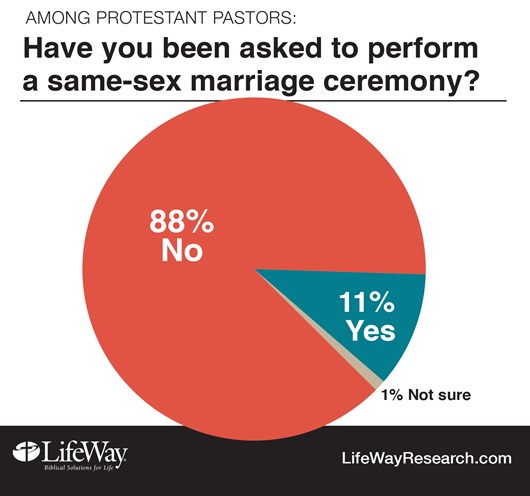 And those who have a Master’s degree (13%) are twice as likely to be asked than those with a Bachelor’s degree (6%).

Pastors of majority-African American churches are less likely than those of other majority ethnicities to be asked (4%).

“Most couples, if they want a church wedding, will ask a pastor they know or who they think will support them,” said LifeWay executive director Scott McConnell. “For same-sex couples, this appears to be an older Presbyterian pastor.”

There’s less consensus about the roles LGBT people can play in church. “More pastors are open to LGBT people serving in their church than being married there,” he said.

About a third of senior pastors (34%) said that LGBT people are not allowed to serve in any capacity. Thirty percent say they can serve “anywhere.” Fifteen percent say LGBT people can serve in at least one role. Twenty-one percent aren’t sure or haven’t discussed the issue. 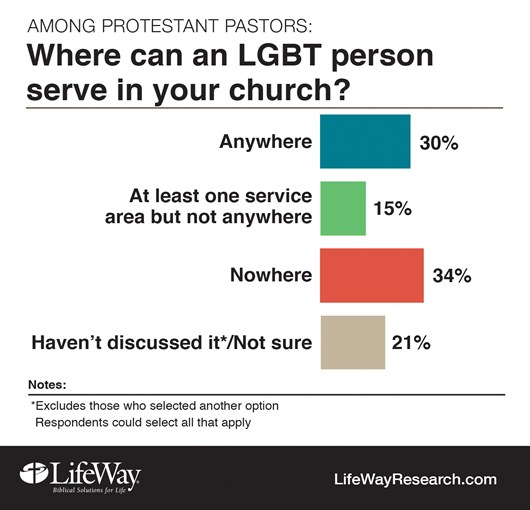 About two out of five (42%) of evangelical pastors say LGBT people are not allowed to serve at all, while less than one in five (18%) say they can serve anywhere.

Among denominational traditions, Presbyterian/Reformed pastors (66%) are most likely to say LGBT people can serve anywhere, followed by Methodists (49%) and Lutherans (42%). Pentecostals (13%) and Baptists (8%) are least likely.

Accordingly, Pentecostal (58%) and Baptist pastors (54%) are most likely to say LGBT people are not allowed to serve. Methodist (5%) and Presbyterian/Reformed pastors (14%) are least likely.

Pastors seem most comfortable allowing LGBT people to serve in the background.

Forty-four percent of all pastors in the survey say LGBT people can serve in “helping or serving roles.” Fewer say they can lead public worship (32%), teach publicly (32%), or hold public leadership roles (33%).

The phone survey of Protestant pastors was conducted March 9–24, 2016. The calling list was a stratified random sample, drawn from a list of all Protestant churches. Quotas were used for church size and Black Protestant denominations. Each interview was conducted with the senior pastor, minister or priest of the church called. Responses were weighted by region to more accurately reflect the population. The completed sample is 1,000 surveys. The sample provides 95 percent confidence that the sampling error does not exceed plus or minus 3.2 percent. Margins of error are higher in sub-groups.