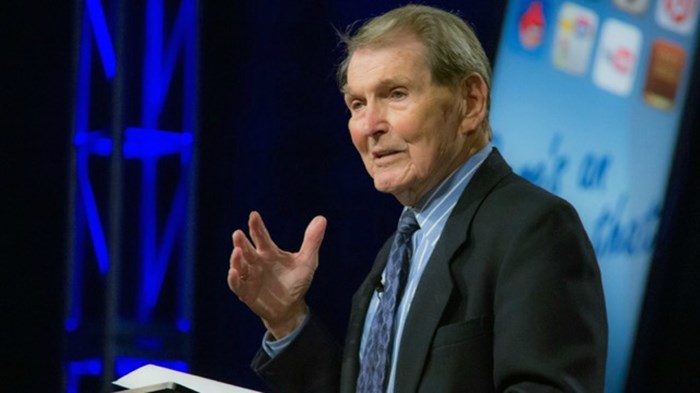 Tim LaHaye, the best-selling author best known for the Left Behind series, “graduated to heaven” early this morning after suffering a stroke at age 90. 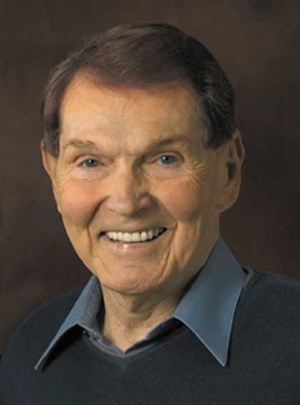 His family announced the news of his passing at a San Diego hospital on his ministry Facebook page.

On the eve of his death, ministry partners, fans, and friends urgently asked for prayer on social media this weekend, offering a wave of early tributes that spread through end-times prophecy circles and chapters of Concerned Women for America (CWA), the 600,000-member public policy organization founded by LaHaye’s wife, Beverly. Some circulated a statement by LaHaye’s daughter Linda: “He will not recover from this, he will soon be graduated to heaven.”

“Tim was one of the most godly men I have ever known,” said David Jeremiah, LaHaye’s successor at the San Diego church he led for 25 years (then named Scott Memorial Baptist Church, now named Shadow Mountain Community Church). “Almost every conversation I had with him ended with his praying with me and for me. He wrote me extended letters of appreciation for what God was doing in our church. We shared long lunches together talking about ministry and praying for our nation.

“When I look back over [his] life, I am reminded of Paul’s words concerning King David: ‘He served his own generation by the will of God’ (Acts 13:36),” stated Jeremiah, senior pastor of Shadow Mountain and founder of Turning Point. “Tim’s ministry will continue for many years through the books he wrote, the organizations he founded, and the people that he influenced. But I will miss him when I look out from my pulpit next Sunday.”

“Whose life hasn't been affected in some way by this man?” wrote Prophecy Watchers, a two-year-old ministry based in Oklahoma City that announced the news of LaHaye’s stroke, describing him as a friend and supporter. “This is a great man of God and if the Lord takes him home, he leaves behind a wonderful legacy. In the words of Steve Green, ‘May all who come behind us find us faithful.’”

“Thrilled as I am that he is where he has always wanted to be, his departure leaves a void in my soul I don’t expect to fill until I see him again,” stated Jerry B. Jenkins, who co-wrote the Left Behind books with LaHaye, in the obituary released by the LaHaye family. [Jenkins wrote a tribute for CT on “the Tim LaHaye I knew.”]

The founder and president of Tim LaHaye Ministries and founder of the PreTrib Research Center, LaHaye sold 62 million copies of the series with Jenkins. “In terms of its impact on Christianity, it’s probably greater than that of any other book in modern times, outside the Bible,” the late Jerry Falwell, a friend of LaHaye’s, told Time magazine in 2005.

CT rankedLeft Behind among the landmark titles that have shaped evangelicalism. LaHaye and Jenkins not only had readers rethinking the rapture, but also the potential popularity of Christian novels. “The book launched a series that launched a marketing empire that launched a new set of rules for Christian fiction. The series spent a total of 300 weeks—nearly as long as the Tribulation it dramatized—on TheNew York Times's bestseller list.”

The series, whose first title released 21 years ago this month, still sells in the six figures annually, according to Jenkins.

“Tim LaHaye’s history as a published author is intertwined with the entire history of Tyndale House,” stated Mark D. Taylor, chairman and CEO of Tyndale House Publishers. “His first book, Spirit-Controlled Temperament, was published 50 years ago in 1966. It was the very first book published by Tyndale House apart from the Living series of Bible paraphrases. And Tyndale’s highest-selling series of trade titles has been the Left Behind series. ... Tim was a wonderful Bible teacher and pastor and an inspiration for our entire industry. We will miss him.”

“It was LaHaye's idea to fictionalize an account of the Rapture and the Tribulation,” according to his bio on the official Left Behind website. It notes:

LaHaye originated the idea of a novel about the Second Coming. "Sitting on airplanes and watching the pilots," he told People magazine, "I'd think to myself, 'What if the Rapture occurred on an airplane?'" LaHaye looked for a co-writer for several years and was then introduced to Jerry B. Jenkins through their mutual agent, Rick Christian, president of the Colorado Springs literary agency, Alive Communications, who also negotiated the book deal. 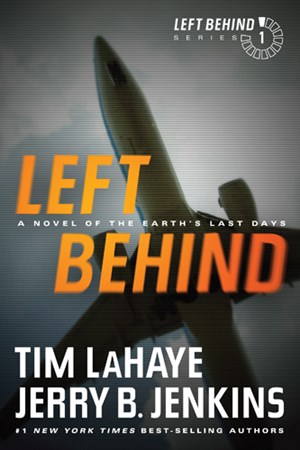 “Writing the Left Behind novel series for him and traveling with him all over the country to promote it, I saw the softer side of a man known for strong opinions and polemic views,” stated Jenkins. “The Tim LaHaye I got to know had a pastor’s heart and lived to share his faith. He listened to and cared about everyone, regardless of age, gender, or social standing. If Tim was missing from the autograph table or the green room of a network television show, he was likely in a corner praying with someone he’d just met—from a reader to a part-time bookstore stock clerk to a TV network anchorman.”

Earlier this month, LaHaye publicly celebrated his 69th wedding anniversary with his wife. Time magazine labeled the pair “the Christian Power Couple” in 2005, listing them among the country's most influential evangelicals. “[Beverly] has been my faithful partner in marriage, parenthood, ministry, and many things we never dreamed. We are still in love today!” he wrote. “God has been faithful to us and we continue to claim as our life verse, Proverbs 3:5 & 6, ‘Trust in the Lord with all your heart, and lean not on your own understanding; in all your ways acknowledge Him, and He shall direct your paths.’”

LaHaye has written more than 60 non-fiction books on a wide range of subjects such as: family life, temperaments, sexual adjustment, Bible prophecy, the will of God, Jesus Christ, and secular humanism with over 14 million in print, some of which have been translated into 32 foreign languages. His writings are best noted for their easy-to-understand and scripturally based application of biblical principles that assist in facing and handling the challenges of life.

During the 1970s Dr. LaHaye was instrumental in gathering a coalition of Southern California pastors together to address a progressive agenda that was undermining traditional family values. Also in the ’70s he encouraged the late Jerry Falwell Sr. to establish the Moral Majority as a way to build a similar coalition nationally. He was also widely credited with garnering evangelical support behind the campaign of George W. Bush.

His ministry offers a fuller obituary.