Popular Christian symbols rank among the most confusing.
Kate Shellnutt|June 3, 2016 09:11 AM 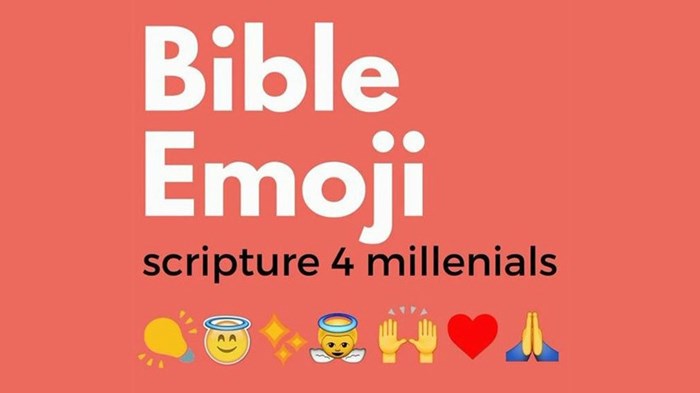 Have you heard the Good News? :)

Sites from The New York Times to The Washington Post to Forbes are reacting to a new emoji-studded Bible translation—the latest effort to make the Holy Book appeal to young readers.

“Bible Emoji: Scripture 4 Millenials (sic)”—now available for $2.99 on Apple’s iBooks—comes from the Twitter account @BibleEmoji, which replaces select words in Bible verses with corresponding smiley faces or other small icons used in text messages and on social media.

This version follows other lighthearted 21st-century translations such as the LOLCat Bible and the Lego Brick Bible. But for all the hype over this particular digital-era adaptation, the emoji Bible actually doesn’t contain that many emojis. It’s a King James Version (KJV) with 10 to 15 percent of the text swapped for emojis; about one or two symbols appear in each verse.

(The KJV is the most-read version of the Bible by far, and despite the popularity of the NIV for ...