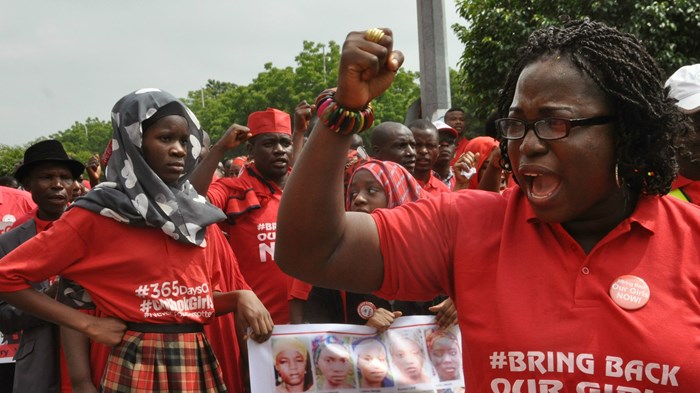 Image: AP Photo/Olamikan Gbemiga
"Bring Back Our Girls" supporters marched in front of the president's residence in Abuja last year.

Boko Haram has released 21 of the girls kidnapped in Chibok in April 2014 to the Nigerian Army in Maidugiri, capital of Borno state (where the Islamist group has been strongest), according to the Nigerian president’s spokesman.

It has been confirmed that the girls were freed in a trade for four imprisoned Boko Haram fighters, the BBC reported. The Swiss government acted as intermediaries.

[Editor's note: On October 13, the Nigerian government denied the swap, instead calling it “a release, the product of painstaking negotiations and trust on both sides.”]

Joel Billi, pastor and president of the Ekeklesiya Yan’uwa Nigeria Church, told World Watch Monitor that 201 of the kidnapped girls belong to his church.

“I would have celebrated even if one person was freed. I am very, very happy to hear that 21 of them are free,” he said. “My heart is also rejoicing that one day soon … the majority of them, if not all of them, are going to be freed.”

It’s been two and a half years since 275 schoolgirls were kidnapped from their dormitories in Chibok, in the northeastern state of Borno. Their disappearance generated headlines around the world and fueled a social media storm with the hashtag #bringbackourgirls.

Today is the first time any of the schoolgirls have been released, though one of them escaped with her baby and Boko Haram “husband” in May. Amina Nkeki was found in the Sambisa Forest, close to the border with Cameroon. (Two days later, Nigeria’s army said it had rescued a second girl, Serah Luka, believed to be the daughter of a pastor. She was later found to not have been among the Chibok girls.)

In September, the Nigerian government for the first time disclosed the details of its failure to secure the release of the girls during negotiations which began in July 2015, shortly after president Muhammadu Buhari took office.

Three times the negotiations were derailed—once at the last minute, even after the president had agreed to free imprisoned Boko Haram fighters. Another time, talks failed because key members of Boko Haram's negotiating team were killed.

In August, Boko Haram released a video which appeared to show some of the Chibok girls looking physically weak and traumatized. In it, a masked man demanded the release of militants in exchange for the girls. One girl, who called herself Maida Yakubu, asked her parents to appeal to the government for their release.

In April, the Boko Haram group released a separate video, apparently filmed on Christmas Day 2015 and broadcast on CNN and other outlets. In it, 15 of the girls pleaded with the Nigerian government to cooperate with the militants for their release. The girls said they were being treated well but wanted to be with their families.

Some parents who attended a screening of that video in Maiduguri identified some of the girls. Two mothers, Rifkatu Ayuba and Mary Ishaya, said they recognized their daughters in the video, while a third mother, Yana Galang, identified five of the missing girls, Reuters reported. One mother said her daughter looked well, much better than she had feared, giving some hope to the families.

The parents have been under a lot of strain: At least 18 of them have died of stress-related illness; 3 have been killed by militants; and many others have persistent health problems brought on by stress.

Billi said he was worried about what might happen to the girls who have been rescued.

“When I heard about this news, I said that the church has to come out and talk to the federal government,” he said. “The church should be in forefront of all things because Anima, who was rescued few months ago, as I am talking, we don’t know where she is. This is to say we have mixed feelings about the whole thing.”

A month after she escaped, some members of Bring Back Our Girls—an advocacy group campaigning for the safe return of the girls—expressed concerns over Nkeki’s whereabouts, saying she had been kept under close control by the government and that she appears to be treated as if she’s become a Muslim (which she would have done against her will).

Buhari had promised the government “will do everything possible” to ensure she receives the care to make a full recovery and to be reintegrated fully into society. But some in the group were concerned that she had not been allowed to return to her Christian family, which they assumed would be a strong element in her recovery from trauma.

Like Nkeki, most of the Chibok girls were reportedly forcibly converted to Islam. It is feared that many have been sexually abused and forced into marriage by their captors.

A report by Nigeria’s Political Violence Research Network detailed this kind of treatment of minority Christians in northern Nigeria going back to 1999. It revealed how tremendously effective and efficient it is to focus attacks on women and girls because the effects are devastating to the community. Entire families and Christian communities are thus “dishonored,” regularly leading husbands to reject wives who are victims of rape and causing embarrassment and shame for their children.

Many become outcasts in their communities, stigmatized due to their perceived association with Boko Haram, reported humanitarian news agency IRIN.

Others—pregnant after rape by their captors—have been “shamed and are now accused of spawning or seeking to spawn future Boko Haram fighters,” stated IRIN.

The fact that Christian women and children suffer at the hands of Boko Haram is a carefully calculated part of the movement’s multi-pronged frontline offensive, designed to intimidate the population into accepting political-religious change, stated the political violence report.

The use of rape was also justified by Boko Haram militants on the basis of “sex as jizya,” a reference to a tax that early Islamic rulers demanded from their non-Muslim subjects for their own protection.

UN special envoy Angelina Jolie has spoken at the UK Parliament about “rape as a ‘policy’ aimed at terrorising and destroying communities.”

“[Islamist groups such as] Islamic State are dictating [it] as policy ... beyond what we have seen before,” said Jolie. The Hollywood actress said the groups know “it is a very effective weapon and they are using it as a center point of their terror and their way of destroying communities and families, and attacking and dehumanising.”