Pew examines church shopping among evangelicals (and other groups) in 2016.
Sarah Eekhoff Zylstra|September 8, 2016 09:00 AM 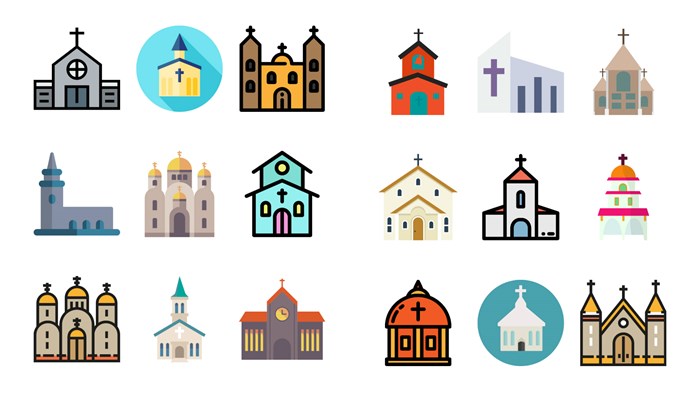 The American pastime of church shopping finally has some solid stats: how many Christians do it (and how often), why they left their last church, and why they picked their current one.

The Pew Research Center's new study, which categorizes respondents according to their denomination, also looked at who is attending church more often and whether their reasons are more theological or practical.

Overall, more than two out of five churchgoing evangelicals say they are attending worship services more often than they used to.

Of the 75 percent of evangelicals who attend church at least once a month, 44 percent said they’re going more often than they did before. About a third said they’ve always attended regularly (31%). 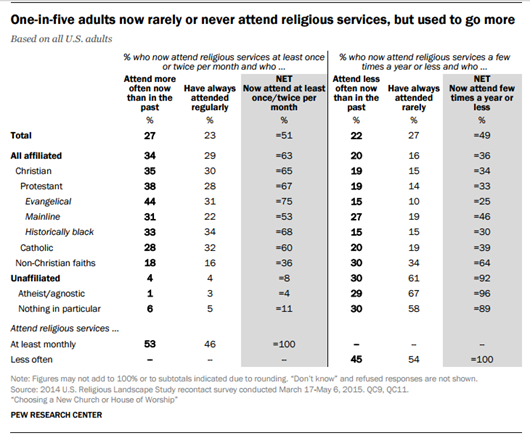 The biggest reason evangelicals are attending more often is a change in their beliefs (54%), Pew told CT. Those who have increased their attendance reported that it’s because they’re becoming more religious (29%), realizing they need God or church in their lives (13%), or becoming older or more mature (12%).

About a quarter of evangelicals said they attend more now for practical reasons—because they have the time in their schedule (11%) or found a congregation they like (6%). Still others began attending more often for social reasons, like starting a family or wanting the fellowship of a church family. 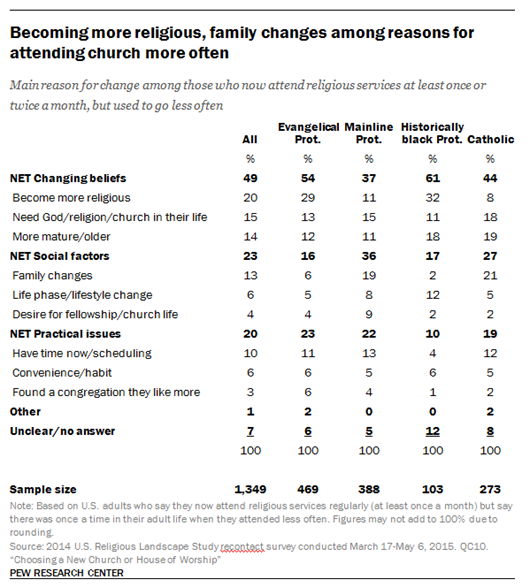 Of those who attend only a few times a year, 15 percent of both evangelicals and historically black Protestants said they’re attending less often than they did previously.

The majority of evangelicals said their lack of attendance was due to practical issues (57%), like being too busy (20%) or too ill (13%). Fewer are pulled away by social factors like family changes (5%) or no longer attending with someone (5%).

About one in five of those who attend less frequently said it was because their beliefs changed (10%), they disagreed with church teachings (8%), or their church has changed (4%). 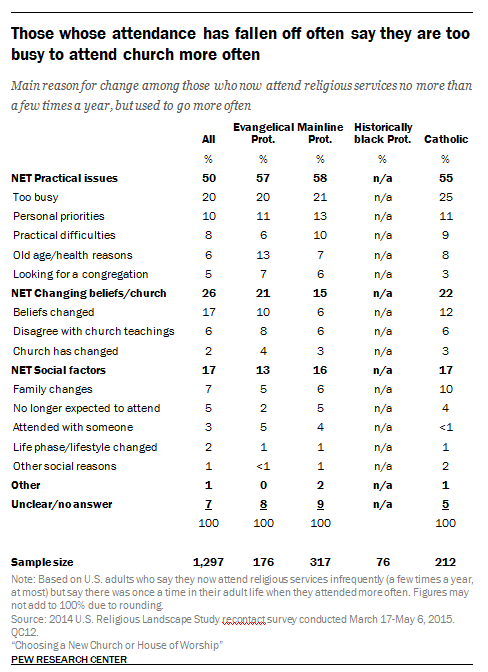 Overall, 67 percent of evangelicals have looked for a new congregation. Fewer historically black Protestants have searched for a new church home (46%), whether because they were moving (29%), had disagreements with pastors or other church members (11%), or changed their marital status (7%).

When evaluating a new church, top-quality sermons are the most important thing both evangelicals (94%) and historically black Protestants (92%) are looking for. They also want to feel welcomed by leaders (82%).

Evangelicals put slightly more emphasis than historically black Protestants in the style of worship services (80% vs. 76%) and location (69% vs. 62%).

Historically black Protestants, on the other hand, were more likely than evangelicals to value opportunities to volunteer (59% vs. 49%), religious education for children (69% vs. 64%), and having family or friends in the congregation (52% vs. 49%). 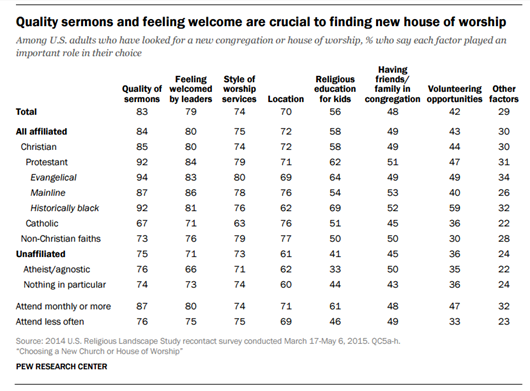 About 9 out of 10 evangelicals and historically black Protestants attended a worship service at a prospective church before making the switch, while about 7 out of 10 talked to members of the congregation, friends, or colleagues about their decision. Evangelicals were a little more likely than historically black Protestants to talk with a minister about switching (64% vs. 58%) or to look online for information (36% vs. 30%). 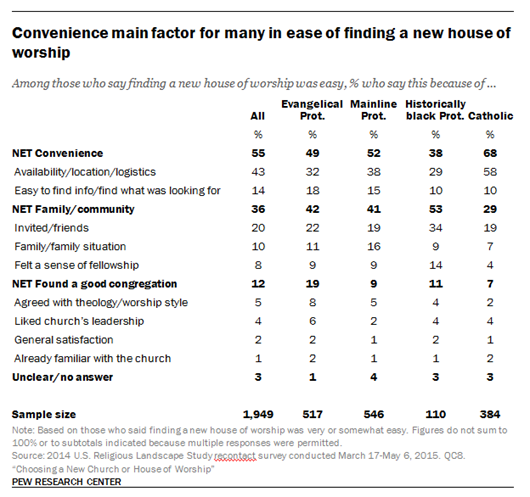 Evangelicals who had a hard time finding a new church said it was because they disagreed with the theology of the places they tried out (27%) or because the location or logistics were inconvenient (22%). A quarter said that prospective churches lacked fellowship (26%). 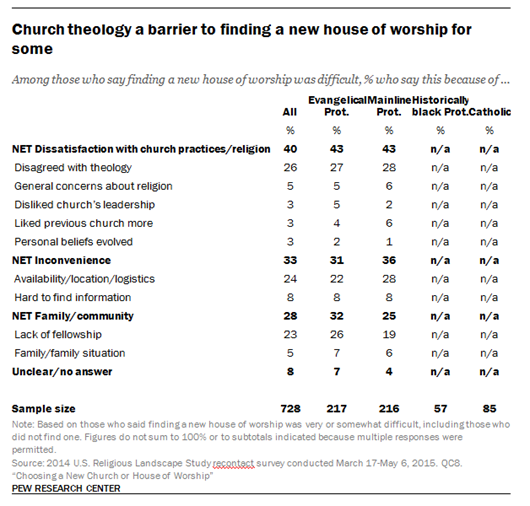 Finding a church to attend regularly is a good move for your mental health and happiness, two new studies show. People who go to church feel happier both on Sunday and throughout the week, and gain both meaning and good coping skills, University of Wisconsin-Madison researchers found.

1 of 6
expand
Give Today
Christianity Today strengthens the church by richly communicating the breadth of the true, good, and beautiful gospel.
Learn more
© 2021 Christianity Today - a 501(c)(3) nonprofit organization.