Pew finds less than half of Protestants in many countries believe both sola fide and sola scriptura.
Sarah Eekhoff Zylstra|August 31, 2017 09:34 AM 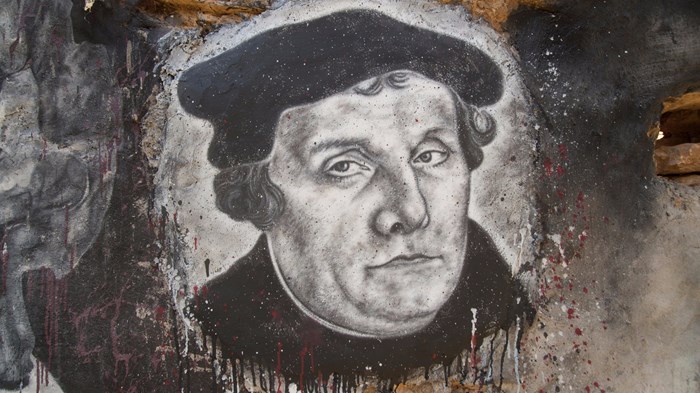 In 1517, Martin Luther staked his soul on two revolutionary ideas: sola fide, that justification is dependent on faith alone; and sola scriptura, that Scripture is the only ultimate authority for Christian belief and practice and does not need oversight from church leaders or tradition to be read and understood.

The 95 theses Luther nailed to the door at Wittenberg served as the catalyst for one of the world’s largest religious splits, as thousands broke off from the Roman Catholic Church. His legacy, 500 years later, is 560 million Protestants across the globe, making up more than a third of the world’s Christians.

But many of them don’t actually agree with him.

Today, half of American Protestants say that both good deeds and faith in God are needed to get into heaven (52%); the same number believe that in addition to the Bible, Christians need guidance from church teachings and traditions, according to two studies released today by the Pew Research Center.

The numbers don’t change in Western Europe. In Luther’s home country of Germany, 61 percent of Protestants believe good deeds are needed for salvation. In John Calvin’s Switzerland, 57 percent agree, as do 47 percent in Abraham Kuyper’s Holland. 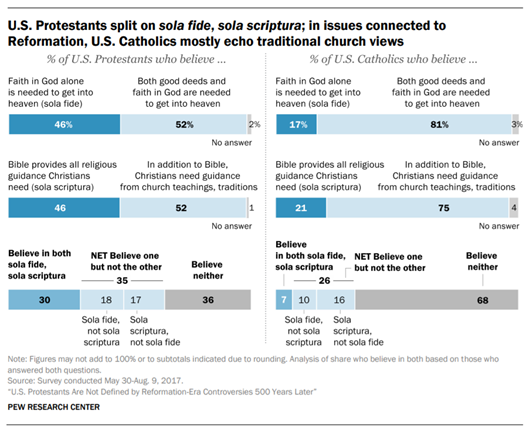 “In fact, in every country [in Western Europe] except Norway (where 51% of Protestants say salvation comes through faith alone), belief in sola fide is a minority view even among Protestants,” Pew reported. (For this study, Pew defined sola fide as “faith in God alone is needed to get into heaven,” and defined sola scriptura as the “Bible provides all religious guidance Christians need.”) 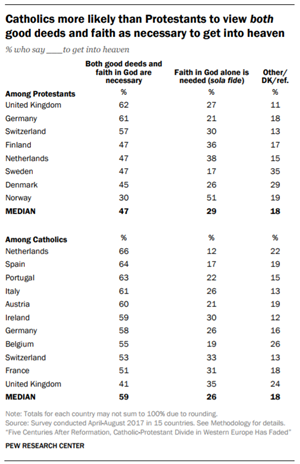 In America, where many followers of the Reformation fled to escape Catholic persecution, more than half of Protestants now say that Catholicism is more like Protestantism than the two are different (57%).

However, most Americans know the two aren’t exactly the same. When asked to define Protestantism in their own words, a plurality of adults said “not Catholic” (32%) or generally Christian (12%).

Though American Protestants were largely able to pinpoint Martin Luther as the inspiration (71%) and the movement’s label as the Reformation (70%), just 3 in 10 said they believed in both sola fide and sola scriptura (by Pew’s definitions).

If Luther has an heir, it appears to be the white evangelical.

“White evangelicals are the only Protestant subgroup analyzed in the survey in which most take the opposite position,” Pew said.

Almost 6 in 10 said the Bible provides all the religious guidance Christians need, while almost 7 in 10 said that faith alone is needed to get into heaven.

Fewer white evangelicals believe in both sola fide and sola scriptura (per Pew’s definitions) at the same time (44%), but the number is still higher than for black Protestants (19%) and white mainline Christians (20%). (Two-thirds of black Protestants identify as evangelical, according to Pew.)

White evangelicals are also least likely to believe in the Catholic teaching of purgatory: 24 percent, compared to 31 percent of white mainline Christians and 47 percent of black Protestants.

Education ups the numbers even further. Among white evangelicals who attended college, most believe in sola fide (81%) or sola scriptura (72%); in fact, most believe both (65%). Just 7 percent believe in purgatory.

White evangelicals were more likely than the average American to know that the Reformation was the term for the historical period when Protestants broke away from the Catholic Church (75% vs. 65%), though a solid minority thought it was the Great Crusade (19% vs. 18%).

Three-quarters of white mainline Christians (73%) and more than half of black Protestants (58%) also got the correct answer. Atheists got it right most often (85%), perhaps because atheists tend to be better educated (83% of those who went to college also got it right).

White evangelicals were less likely to know that it was Martin Luther whose writings inspired the Reformation (67%). White mainliners (69%), black Protestants (77%), and atheists (75%) were more likely to know the right answer, as were those who went to college (80%).

White evangelicals’ second best guess for who started the Reformation was John Wesley (21%); most knew it wasn’t Thomas Aquinas (7%).

The question is a tricky one. Thirty years after Luther posted his 95 theses, the Council of Trent (1545-1563) laid out the Catholic position on justification. “[N]one of those things that precede justification, whether faith or works, merit the grace of justification,” their decree said, regarding initial justification.

But, about subsequent justification, it also said that “if anyone says that the justice received is not preserved and also not increased before God through good works, but that those works are merely the fruits and signs of justification obtained, but not the cause of its increase, let him be [excommunicated].”

Correction: This article originally defined sola fide as stating that “salvation” is dependent on faith alone, whereas “justification” is the correct word.

500 Years After Reformation, Many Protestants ...