(UPDATED) Obama’s spiritual adviser explains why his gifts are at 'their highest potential' but his call to local churches like Northland is ‘fulfilled.’
Kate Shellnutt|August 2, 2017 10:26 PM 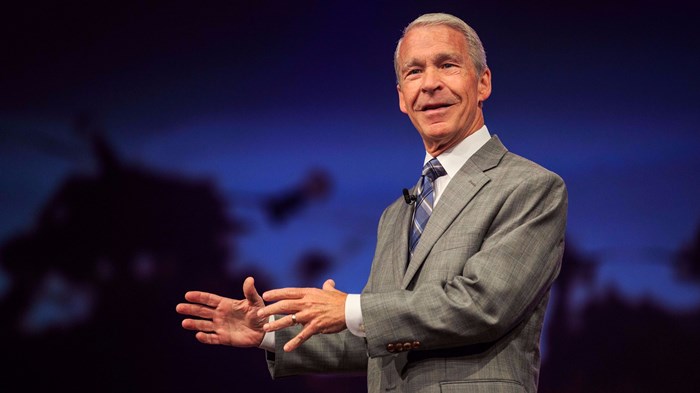 Joel Hunter, the innovative megachurch pastor who spoke out on the national stage as an evangelical adviser to President Barack Obama, is stepping down from Northland Church in order to minister “outside the four walls of the church.”

“My call to the pastoral role in a church is fulfilled,” wrote Hunter after serving 32 years as the Orlando-area church’s senior pastor and a previous 15 years as a United Methodist pastor.

While grateful for Northland’s accomplishments at discipling its congregants and community, he explained that, like Jesus, he now feels called to focus on those “unincluded in the Kingdom” outside religious settings.

“My experience, relationships, and apostolic gifting are at their highest potential,” wrote Hunter, “and I will spend them in the most productive way possible in this final season of my journey.”

“There is no one like Pastor Joel,” Northland wrote in a statement announcing Hunter’s plans, which he revealed to staff on Wednesday after returning from an annual sabbatical.

Under his leadership, Northland grew from a couple hundred people in 1985 to 20,000 weekly attendees at three locations, and Hunter became an innovative leader among the early wave of pastors building multisite congregations with streaming services.

Elders at his nondenominational congregation have not yet identified the “best timing” or plan for his transition following the announcement, which indicated that Hunter, 69, will not fully retire from ministry.

“Pastor Joel made it clear to us that he is not finished serving God and this community,” stated Northland’s lead pastor, Vernon Rainwater. “However, he has completed his pastoral call.”

“You’ve often heard me express a desire to serve at Northland for the rest of my life. So you may be asking, ‘What changed?’

I believe God will continue using Northland in wonderful ways, but He is calling me to focus my life on a new season of ministry outside the four walls of the church.

When I knelt at the altar to give my whole life to Jesus, I was a part of the Civil Rights movement. My focus on Jesus was not only for personal salvation after this life but also for compassion towards the marginalized in this life. My call to follow Jesus and serve the vulnerable is stronger than ever.

Jesus often taught in different synagogues but the bulk of his teaching and work was outside established religious settings. Following his way, I will seek to include the unincluded in the Kingdom.

Hunter explained he will initially focus on three initiatives: teaching a weekly Bible study where community members can ask questions; helping the Community Resource Network unite people and churches to address the problem of homelessness; and forming networks of Jesus followers in order to “distribut[e] the church into everyday life.”

Rainwater praised Hunter for being “a man of integrity, full of compassion for others and infectious love for Jesus Christ,” as well as “a catalyst for worship and service throughout this city and around the world.”

Meanwhile, Rainwater stated that Northland will remain focused on its purpose to “bring people to maturity in Christ” and will “continue to be a community that includes the unincluded, the marginalized, and gathers to worship God for who He is and what He has done.”

Hunter, who serves on the boards of both the National Association of Evangelicals and the World Evangelical Alliance, famously served as a moderate evangelical (and registered Republican) on Obama’s spiritual cabinet, having resigned from the Christian Coalition a couple years earlier.

“Politics is one venue in which the Lord can work, but his plan A has always been the local congregation,” Hunter said in a 2009 CT profile. “My calling is to be part of that frontline ministry.”

He explained more in his Northland bio: “I am not partisan, nor am I politically oriented. But as God has ordained three institutions—the family, the church, and the government—I work as a pastor in all three of these arenas to promote love and caring and service, especially to those who need it most.”

Hunter served on President Obama’s first Advisory Council on Faith-Based and Neighborhood Partnerships, and published A New Kind of Conservative: Cooperation Without Compromise.

In 2010, he decided to leave the Republican Party, explaining to CT:

For 40 years I was a registered Republican like Paul was a registered Pharisee after he became a follower of Christ—when it furthered the agenda of the Gospel (as I understood it) then I was active as a Rep. When it didn’t, I wasn’t.

I was never comfortable being identified with a political Party but the hyper-partisanship and the outside voices hijacking legitimate political debate is not something of which I will be a part.

In 2011, Hunter was named to the Commission on Accountability and Policy for Religious Organizations, an inquiry led by the Evangelical Council for Financial Accountability on behalf of Sen. Charles Grassley, R-Iowa, in the wake of his investigation of the finances of six televangelists.

Hunter shared his response to Obama’s same-sex marriage announcement in a 2012 interview with Leadership Journal, a CT sister publication.

In Orlando, Hunter belonged to the group of pastors seeking dialogue and racial reconciliation in the wake of the Trayvon Martin shooting in 2013. He told CT that their partnerships ultimately “built a much closer relationship between many of the African-American pastors and Anglo pastors” in the area.

When national tragedy struck the Orlando area again in 2016 with the Pulse Nightclub attack, his church joined in the citywide response. “I was brokenhearted, not because I had so many relationships in the LGBTQ community, but because I had so few,” he wrote in a reflection earlier this year. “Was I complicit in the divisions that led to this destruction? Could anything I said, or preached, have led to this kind disrespect or prejudice or ostracism for that community?”

Back in 2008 and 2009, Hunter prayed at the Democratic National Convention (after first getting Billy Graham’s advice) and on Obama’s inauguration day, hopeful about evangelicals’ place in America’s political future. (CT recently examined the precarious task of praying with presidents.)

“There is great potential for the church to be part of the solution to the problems in our culture and the problems in our world,” he told CT in a 2008 interview, “if we can build coalitions that help enhance the common good that also enhances the Christian social agenda.”