More than 3,000 employees in 36 states will be laid off in the liquidation of one of the world’s largest Christian retailers.
Sarah Eekhoff Zylstra|February 23, 2017 02:13 PM 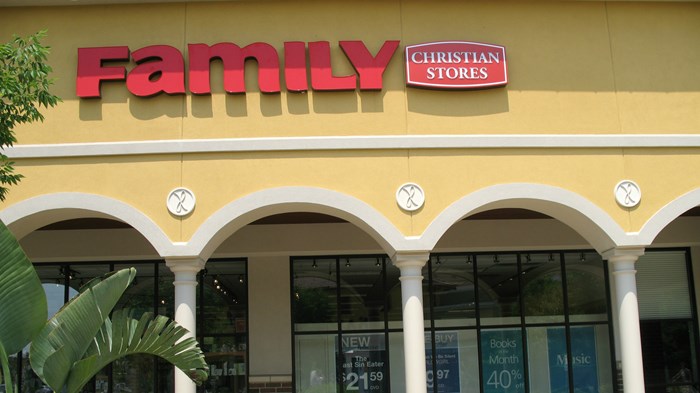 More than two years ago, suppliers forgave Family Christian Stores $127 million in debt so that it could remain open. Today, the chain—which bills itself as “the world’s largest retailer of Christian-themed merchandise”—announced it is closing all of its stores after 85 years in business.

Family Christian, which employed more than 3,000 people in more than 240 stores across 36 states, blamed “changing consumer behavior and declining sales.”

“We had two very difficult years post-bankruptcy,” stated president Chuck Bengochea. “Despite improvements in product assortment and the store experience, sales continued to decline. In addition, we were not able to get the pricing and terms we needed from our vendors to successfully compete in the market.

“We have prayerfully looked at all possible options, trusting God’s plan for our organization,” he stated, “and the difficult decision to liquidate is our only recourse.”

Tyndale House Publishers chairman and CEO Mark Taylor called the stores “an important outlet for Christian books, gifts, and Bibles for many decades.”

“All of us at Tyndale House Publishers feel a sense of grief over Family Christian’s decision to close the entire chain of stores,” he stated. “Family’s millions of customers now have even fewer options for finding these wonderful, life-giving products. The entire Christian community—indeed the entire nation—will be poorer as a result of this pending closure.

“At the same time that we share our sense of loss, we express our appreciation to Chuck Bengochea and his staff who have worked so hard over the past few years to make the chain of stores succeed,” stated Taylor. “We will pray for the many Family employees who will lose their jobs.”

Family Christian’s financial problems weren’t new. In 2012, the chain bought itself back from private equity owners, and in 2013 promised to donate all profits to serving widows and orphans around the world. But only $300,000 was contributed to charities over the following two years, exhibiting how slim the margins were on the $450 million in gross sales the chain generated over the same period.

But 27 Christian publishers, including InterVarsity Press, Baker, Charisma Media, David C. Cook, and Abingdon Press, objected to the retailer’s restructuring plan, under which the chain would get to own $20 million worth of items bought on consignment “free and clear,” without paying the suppliers.

The Christian vendors also criticized the way the terms benefited Richard Jackson, who owned Family Christian, the first lienholder (FC Special Funding) in line to be paid with any proceeds, and the purchasing organization (FCS Acquisition).

The creditors claimed Jackson sought “to complete [his] scheme to own the Debtors for a mere $4 million in cash and reduce debt of the companies by over $90 million, by acquiring the Debtors—in 20 days.”

The creditors filed a lawsuit; in response, Family Christian pulled its proposal. The chain headed to auction, where three of the four bidders were liquidators. That dismayed the Christian suppliers even more.

“No one except the banks and the attorneys will get any money” from a liquidation, Tyndale’s Taylor stated when Family Christian’s bankruptcy bid was first announced. “We hope Family Christian can survive as a chain of stores. Our industry needs them.”

FCS Acquisition won the auction, but its victory was promptly tossed out by a judge who called the process “flawed” and FCS Acquisition an “indisputable insider.”

So Family Christian asked its creditors to vote: Either choose one of the liquidators and get nothing (since the creditors were behind FC Special Funding in the line to get paid), or choose FCS Acquisition and keep the doors open and the lights on. Creditors would lose their $20 million in consignment items, but would at least have a place to continue selling new goods.

Faced with those options, Family Christian’s creditors voted 162 to 7 to sell to FCS Acquisition. Family Christian shed about $127 million in debt; $108 million of it to the creditors who voted for them to stay open.

“For the short term, they will be healthy. And if they can adapt to the retail challenges ahead, they may be successful,” Christian literary agent Steve Laube told CT at the time. “Unfortunately, their financial ‘health’ came at the expense of a number of publishers, suppliers, and authors.”

“It was a contributing factor in our need to seek court protection,” Gospel Light CEO Dave Thornton told CT at the time. “We had to write off $143,000 in expected income, and we’re a smaller, family-owned Christian publishing company that didn’t have deep enough pockets to sustain that, combined with other unexpected losses this spring.”

“What this means for the industry is [there is] one less major distributor to feed the Christian store market,” Laube told CT at the time. “If their demise had been six months ago, I would have made the correlation [to the bankruptcy]. But today it is merely a reflection of the shift in retail buying patterns.”

Responding to news of the liquidation, Laube told CT today that Family Christian’s closing “will have a deleterious effect on many communities which have relied on their local store for their Christian products, whether it be a greeting card, book, or Bible.

“While hard news for the publishing industry to absorb, I suspect most companies have limited their financial exposure,” he said. “Any loss is regrettable.”