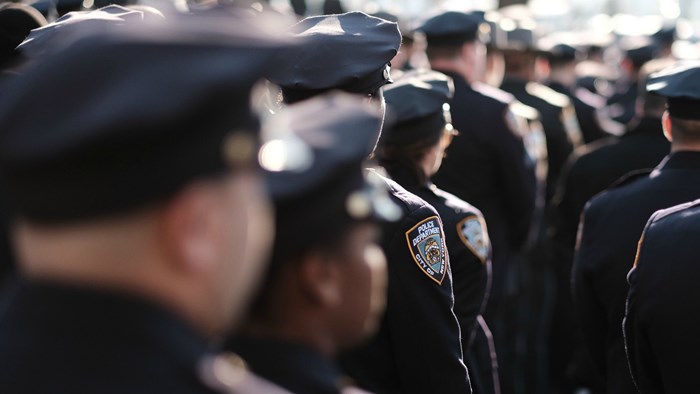 In the wake of high-profile police shootings over the past several years, American Christians have joined movements to pray, march, and advocate for justice. Yet whether they find themselves supporting Black Lives Matter, Blue Lives Matter, or somewhere in between depends more on their race than their particular Christian tradition.

These findings come from detailed data provided to CT from the Pew Research Center’s Behind the Badge report, released last month.

“These data suggest that race is more strongly associated than religion in how people view the police,” said Rich Morin, one of the report’s lead writers. “This is not particularly surprising. We see the strong influence of race on a range of views, reflecting the deep divisions along racial lines in so many areas of American life.”

A sizable majority of white Protestants (71%) said police around the country are doing an “excellent” or “good” job protecting people from crime, but fewer than half of black Protestants (45%) rated officers as high. 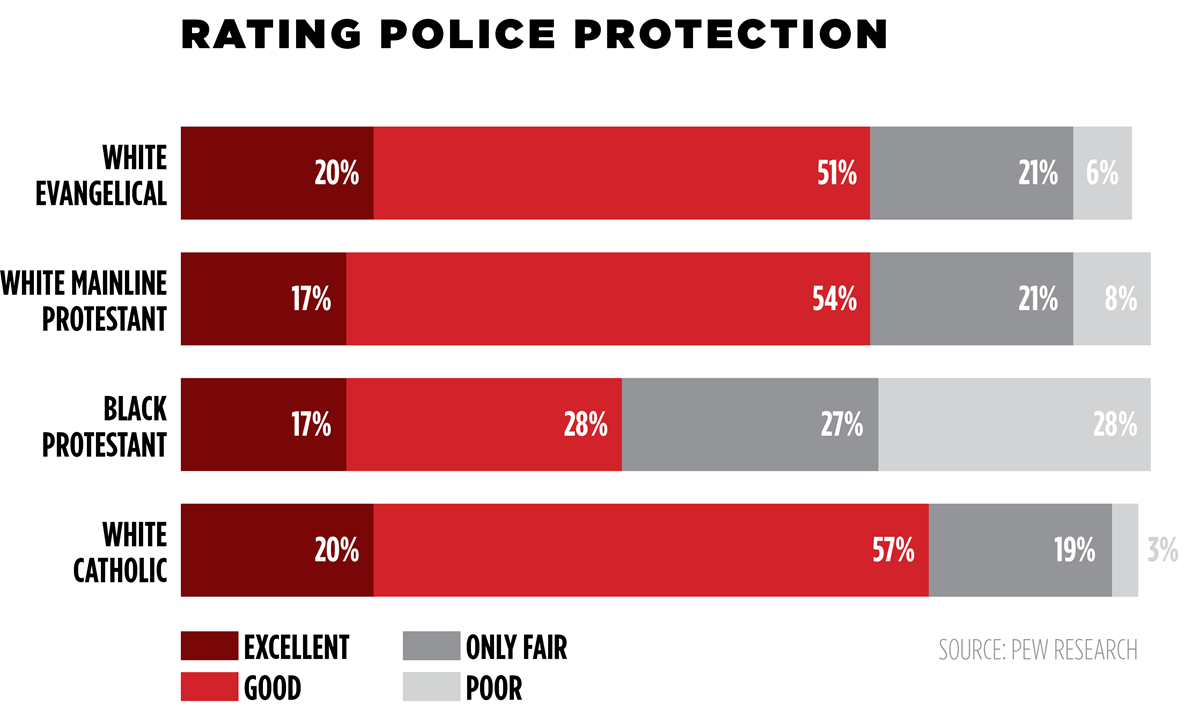 The racial division grew when Christians were asked to rate officers’ equal treatment of racial and ethnic groups. White evangelicals (68%) and white mainline Protestants (58%) were more than twice as likely than black Protestants (25%) to give cops a positive rating on this measure.

“African Americans, especially in under-resourced urban communities, have had a very different relationship with police departments than most white evangelical communities,” said Efrem Smith, president of World Impact, a missions and church-planting organization focused on the urban poor.

Smith pointed out that many African Americans, himself included, have been pulled over without discernible cause, harassed, or even misidentified as criminal suspects. Some Americans, including white evangelicals, have encouraged people of color to comply with law enforcement, saying if they listen they will avoid the fatal consequences suffered by people like Philando Castile and Eric Garner.

In 2015, Franklin Graham told his Facebook followers, “Most police shootings can be avoided. It comes down to respect for authority and obedience.” He cited Hebrews 13:17 as biblical backing for his advice: “The Bible says to submit to your leaders and those in authority ‘because they keep watch over you as those who must give an account.’”

Yet news reports, personal experiences, and the fear of police mistreatment correlate with African Americans’ reluctance to believe officers use appropriate amounts of force for the authority granted in their role. Almost half of black Protestants surveyed (46%) gave police the lowest rating on this measure. Meanwhile, 61 percent of white evangelicals and 57 percent of white mainline Protestants felt the opposite and rated officers’ use of appropriate force as “good” or “excellent.” 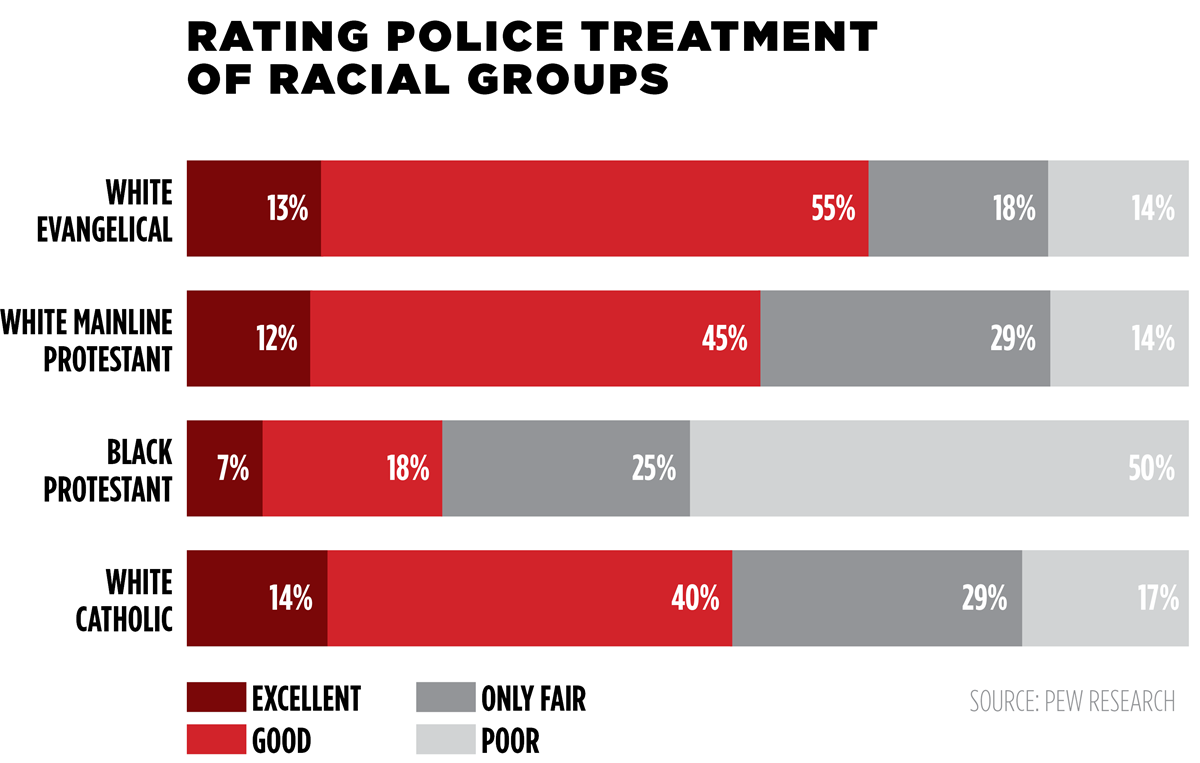 Black Protestants’ skepticism over the treatment of racial groups and use of force reflects “a balanced understanding that the police department—just like any other institution in this sinful, broken world—has its beautiful side and its ugly side,” said Smith, whose organization and home church, Bayside Midtown in Sacramento, partner with police for community-building efforts.

“Many white evangelicals who have never had a negative experience with the police based on their skin color can have an imbalanced view,” he said.

White evangelicals (66%) are about three times as likely as black Protestants (23%) to say police have done a “good” or “excellent” job at holding officers accountable in cases of misconduct, Pew found.

Homicide detective-turned-apologist J. Warner Wallace blogged about police violence following the deadly shootings in Baton Rouge, St. Paul, and Dallas last July. “Resist the temptation to vilify the entire law enforcement community when single officers make a mistake or do something unethical,” he urged fellow Christians. “This is still a noble profession. This is still the kind of calling you’d be proud to have your children answer.” (His son is a cop.)

Yet certain cases have pricked Christian consciences. When the officer who put Eric Garner in a fatal chokehold—on tape—was not indicted for his actions back in 2014, evangelical leaders, both white and black, expressed a more united, critical response than for previous incidents, CT reported. National Association of Evangelicals president Leith Anderson, author Beth Moore, and the leadership of Redeemer Presbyterian Church in Manhattan joined a chorus of diverse voices speaking out against racial injustice.

According to Pew’s research, black Protestants were more likely than any other religious group to believe these deaths of African Americans during police encounters were not just isolated incidents. About 8 in 10 black Protestants saw them as part of a broader problem between Africans Americans and law enforcement, while only about 5 in 10 white evangelicals, white mainline Protestants, and white Catholics felt the same.

Black and white Christians have grown further apart in their perceptions of racial issues over the past decade. Earlier research for the Portraits of American Life Study, covered by CT, revealed significant divides over how often they think about race, whether they believe it’s beneficial to talk about race, and whether the government should do more to help minority communities in poverty.

In the Pew survey, white, black, and Hispanic Christians all gave higher ratings to police in their communities than America’s police force overall. On each measure, white evangelicals were more likely to give local police an “excellent” rating than other Christian groups.

“The differences in how they view local police and how they view police nationally is highly significant. It’s also striking to see that this divide is present across a range of demographic and social groups,” said Morin, senior editor at Pew.

“Most people only know about police nationally from what they see on the evening news, hear on the radio, or see online or in their newspapers,” he said. “As far as their local officers, they know more about both the good and the occasional bad that these officers do.”

On his blog, Wallace, author of Cold-Case Christianity, suggested that law enforcement and Christians share common concerns and values on the community level.

“The bar is high for police officers, and it’s just as high for Christians,” he wrote. “Are we courageous enough to address the real issues? As Christians, we must lead, and our response to this growing dilemma must reflect both the mercy and justice of God.”