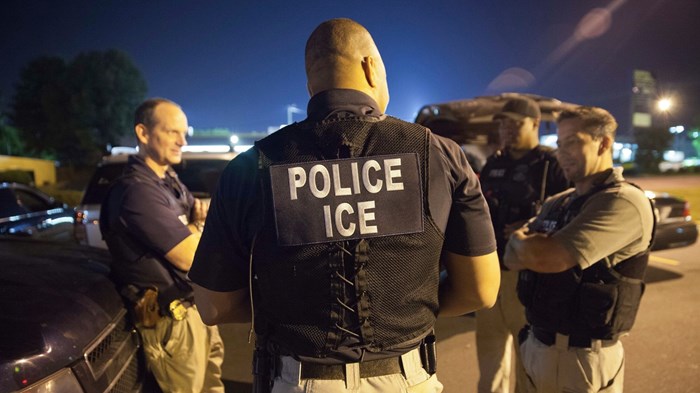 Image: US Immigration and Customs Enforcement

Even before President Donald Trump pledged to double down on policies against undocumented immigrants living in the United States, many Hispanics were already praying for protection.

Half of Latino Christians worry about themselves or someone close to them getting deported, according to Pew Research Center data provided to CT. And more than 4 in 10 have “serious concerns” about their place in America under Trump.

Hispanic Catholics (54%) and Protestants (47%) were more likely than the unaffiliated (38%) to say they worry “a lot” or “some” about the threat of deportation, Pew’s survey of Hispanic adults living in the US found. One in four Protestants worry a lot (25%), while Catholics are significantly most likely to worry a lot (37%).

The orders from the Department of Homeland Security (DHS) include provisions to protect children brought to the United States when their parents entered illegally. About a million of these “Dreamers” have been safeguarded by the Deferred Action for Childhood Arrivals (DACA) program, while Deferred Action for Parents of Americans applies to families of children born in the US.

“I ask the administration to enact and fulfill the promise President Trump made not to harm families and exclusively deport those involved in nefarious activities,” stated Samuel Rodriguez, one of Trump’s evangelical advisers and president of the National Hispanic Christian Leadership Conference (NHCLC). “Please, help us keep families together.”

A significant proportion of the country’s Latino population—57 million people and growing—have been grappling with their place in America under the new president, even though two-thirds were born here, according to Pew.

After Trump’s election, half of Hispanic Catholics (50%) said they now had “serious concerns about my place in America.” This was significantly higher than the 37 percent of Protestants and 38 percent of the unaffiliated who felt the same.

Conversely, those two groups were significantly more likely than Catholics to feel secure under Trump. A majority—59 percent of Latino Protestants and 57 percent of those with no religious affiliation—agreed with the statement, “I am confident about my place in America.” Only 46 percent of Catholics felt the same.

Rodriguez—who read from the Beatitudes during Trump’s inauguration—has urged the Trump administration to keep DACA intact. He also said he was “encouraged to learn the DHS will maintain the previous administration’s policy of keeping churches and schools off-limits from future immigration enforcement actions.”

Some churches that minister to undocumented immigrants or offer sanctuary still fear the worst.

Intimidating government policies “not only target immigrants themselves, each of whom we believe is made in the image of God with inherent dignity regardless of their legal status, but also encroach upon religious institutions’ ability to minister,” wrote Southern Baptists Alan Cross and Gus Reyes in Time magazine.

The Matthew 25 Movement—which involves the Christian Community Development Association, the National Latino Evangelical Coalition, and other Christian groups—has developed resources for churches to learn about how to help immigrants facing deportation. The social justice group Catholics in Alliance for the Common Good organized a vigil by the White House last weekend, in anticipation of the new DHS directive.

A United Methodist ministry leader is among those who were detained this month and could be deported over their immigration status, Think Progressreported.

In the Pew survey of Hispanic adults, Protestants had the lowest expectations for Trump as president, with a plurality of 29 percent anticipating he will be “terrible,” compared to 23 percent of Catholics and 24 percent of Hispanics overall rating him that low. However, Protestants were also significantly more likely than Catholics to say Trump will be a “great” president (12% vs. 3%).

Despite their concerns over deportation, Hispanics are more likely to believe issues like education, national security, the economy, and health care belong higher on Trump’s agenda than immigration. Fewer than half of Protestants (44%) told Pew that immigration should be a priority. Catholics were slightly more in favor, with 52 percent ranking it as a top issue.

Improving the education system is actually the biggest concern for Hispanics, with 69 percent of Protestants and 73 percent of Catholics saying Trump should make it a priority. (Andrea Ramirez, executive director of the NHCLC’s Faith and Education Coalition, emphasized the Christian call to engage in public education in her CT article in response to the appointment of Education Secretary Betsy DeVos.)

While Hispanic Christians are mostly dissatisfied with the current direction of the country, they still hold a relatively favorable view of Barack Obama’s legacy. Pew reported that nearly half (48%) say the Obama administration’s accomplishments outweigh its failures, while 36 percent say the reverse. The two perspectives are closest among Protestants, with 46 percent siding with Obama’s accomplishments and 42 percents siding with his failures.