The influential Reformed leader is moving away from his NYC pulpit as his church becomes three.
Kate Shellnutt|February 26, 2017 08:20 PM 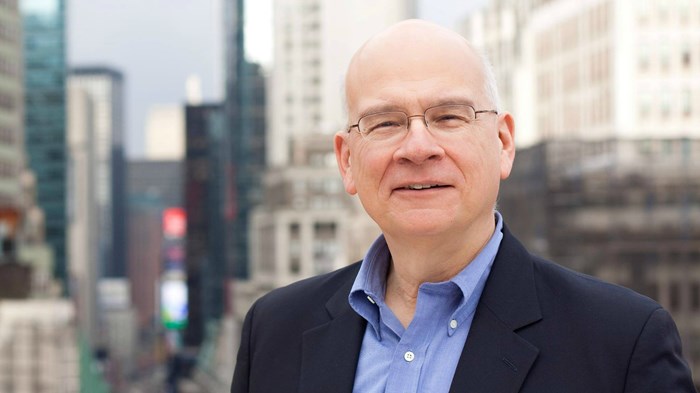 Keller, 66, announced at all eight Sunday services today that he will be stepping down from the pulpit. The move corresponds with a decades-long plan to transition the single Presbyterian Church in America congregation—which has grown to 5,000 members since it began 28 years ago—into three particular churches.

His last day as senior pastor will be July 1.

This move does not mean retirement for Manhattan’s most popular evangelical pastor and apologist; instead, Keller will work full-time teaching in a partner program with Reformed Theological Seminary and working with Redeemer’s City to City church planting network.

“Kathy and I are not going anywhere. New York is our home, and you are our people. We’re not leaving New York or the fellowship of Redeemer,” he assured the church Sunday. “I’m becoming a teacher-trainer …. There’s going to have to be a dramatic increase in church leaders in this city if we’re going to start all these churches.”

Redeemer posted a transcript and video of the announcement on its site on Monday.

“There’s a certain level of him that’s going to mourn the connection with a congregation and being their pastor,” said Kathy Keller, Tim’s wife and a staff member at Redeemer, in an interview with CT. “It’s a loss. But there’s also something very exciting that he’s going to.”

She said that her husband has been “so wired” to teach seminary courses already, and is excited to dedicate himself to teaching the next generation of pastors.

Because he won’t be preaching anymore, he’ll be involved with more mid-week events, including speaking at Redeemer’s “Questioning Christianity” series and this year’s fall retreats.

“He will probably be speaking the same volume of words as he does now,” Kathy Keller said.

Through Redeemer, Keller’s ministry helped ignite an urban church planting movement and advanced the church’s contemporary exploration of faith and work. The Reformed pastor is a cofounder of The Gospel Coalition (TGC) and author of The Reason for God and The Meaning of Marriage.

Bethany Jenkins, who attends Redeemer and directs a faith and work initiative for TGC, tweeted the news Sunday afternoon, saying, “Big day for @RedeemerNYC, as @timkellernyc announced he's stepping down as senior pastor as of July 1.” The hymn that followed the announcement, Jenkins shared, was “Lead On, O King Eternal.”

The transition follows a vision plan Redeemer set in place back in 1997, and preparing Keller’s three successors—the pastors at each of the new particular churches—ended up as a helpful side effect. “This is not primarily a succession plan,” Kathy Keller said. “It is a vision for not being a megachurch.”

Each of the three Redeemer churches will remain collegial and still partner together for programs, but will officially be their own congregations with their own leaders and elders (pending a May 20 congregational vote). They also each will plant churches in three more locations—resulting in nine total daughter churches—starting with Redeemer Lincoln Square, which is scheduled to launch on Easter Sunday.

“I am honored to take my place in that strategy as a teacher and trainer, while also continuing to have a presence and teaching role in the three Redeemer churches,” Keller said in his statement. “The gospel is a living force, always sending and giving—and as I am sent in a new way now, so is every member of Redeemer, to love and serve this great city.”

During his nearly three decades leading the destination congregation for young and professional evangelicals in New York City, Keller has built a big name and legacy across the American church.

Keller thrives on New Yorkers’ curiosity, and his church proudly proclaims, “Skeptics Welcome.” New York magazine called Keller “the most successful evangelist in the city,” citing his influence among young professionals. (News commentator Kirsten Powers wrote in her CT testimony how she came to faith in part through Keller’s ministry.)

Through the City to City church planting program, Redeemer has launched 381 churches in 54 cities worldwide. As CT wrote a decade ago, “Fifty years from now, if evangelical Christians are widely known for their love of cities, their commitment to mercy and justice, and their love of their neighbors, Tim Keller will be remembered as a pioneer of the new urban Christians.” He was also featured in a 2009 cover story, “How Tim Keller Found Manhattan.”

According to Leadership Network, the average megachurch pastor in America is 55 and has served at their current pulpit for 21 years; Keller has several years on that. With his recent announcement, he joins a trend of pastors of big congregations opting to plan for their succession, rather than leaving due to age, illness, or scandal.