What Both DC Marches Agree On: Abortions Haven’t Been This Rare Since Roe v. Wade

What Both DC Marches Agree On: Abortions Haven’t Been This Rare Since Roe v. Wade

Pro-life and pro-choice advocates agree on data, disagree on causes.
Sarah Eekhoff Zylstra|January 27, 2017 08:17 AM
Image: March for Life
What Both DC Marches Agree On: Abortions Haven’t Been This ...

“There’s never been a time, ever, when the muscle of the pro-life movement has been so strong,” Susan B. Anthony List president Marjorie Dannenfelser toldTime this month.

The 44th annual March for Life comes less than two weeks after the Guttmacher Institute, the former research arm of Planned Parenthood, reported that abortions fell to less than a million in 2014. The total was 12 percent fewer than in 2011, and the lowest rate since Roe v. Wade legalized the practice in 1973. 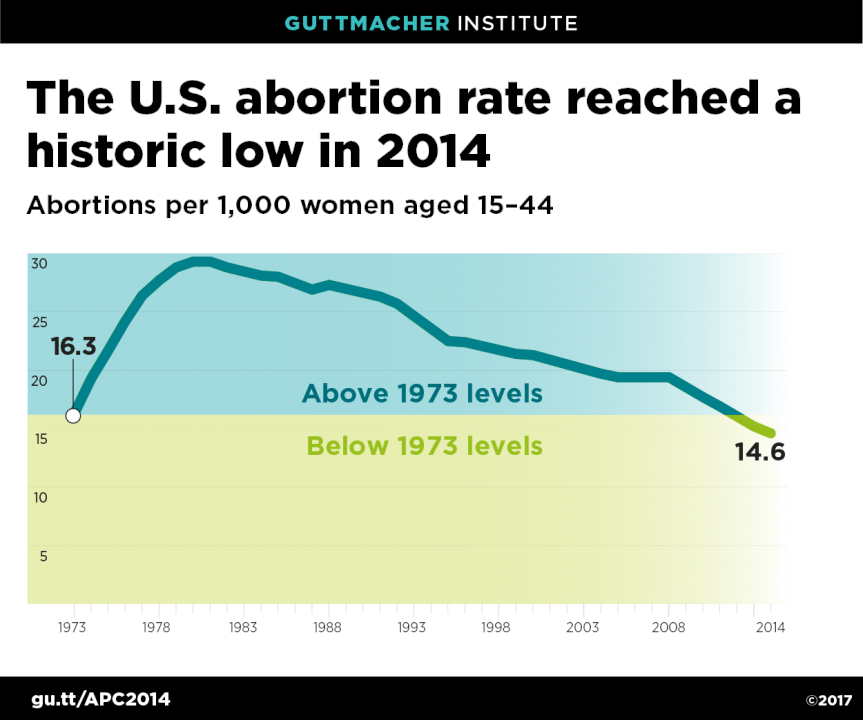 Guttmacher credited the rising rate of contraception use, which delivers fewer unintended pregnancies.

“Births do not appear to have replaced most abortions in the most recent period: The number of abortions declined by a little over 132,000, whereas the number of births increased by only about 35,000 (some of which could represent more intended births, as happened between 2008 and 2011),” wrote Guttmacher senior policy communications manager Joerg Dreweke.

Dreweke pointed to a study detailing the increased use of long-acting reversible contraceptives (such as IUDs and implants) among teens; although the study was only conducted among women who already used contraception, the efficacy of longer-acting contraceptives is higher than those of other birth control methods. In 2008, 27 percent of women who procured an abortion reported using condoms when they became pregnant; 17 percent were using a hormonal method.

The US Department of Health and Human Services credits the falling teen birth rate to both more teens choosing abstinence and the increased use of contraception.

Guttmacher also acknowledged the “flood of new restrictions” that pro-life advocates have encouraged state lawmakers to pass in recent few years. Since 2012, 47 legal restrictions went into place in 22 states; the declines in those states account for about 38 percent of the abortion decline from 2011 to 2014, according to Guttmatcher.

But that means 62 percent of the decline happened in states (and the District of Columbia) that didn’t have new restrictions.

The most effective laws “make it expensive or outright impossible for providers to come into compliance, often resulting in clinics being forced to close,” according to Guttmacher. Of the nine states that implemented these types of laws, eight had larger-than-average declines in abortion clinics.

Pro-life groups, many of whom are involved in legislation to restrict abortion, believe that those laws were critical. Another important factor, they said, is the use of ultrasounds.

“Such pictures are worth more than a thousand words when it comes to helping people understand whose lives are on the line,” stated Americans United for Life acting president Clarke Forsythe.

National Right to Life (NRLC) president Carol Tobias agreed. “When they see the child moving in the womb on an ultrasound, when they hear the heartbeat of the unborn child, when they know there are people and programs available to help them with a new baby and new circumstances, when they see what dismemberment abortion does to these precious children, the pain and agony that is involved in every chemical abortion, they look for life-preserving solutions that are better for everyone involved.”

(The ultrasound debate took off on social media recently after an article for The Atlantic blamed them for making a “heartbeat” and fetal reaction to stimuli seem more real than it is.)

None of the explanations is perfect, and others reached for different interpretations of the data.

NRLC director of education and research Randall O’Bannon said that “one element that may not be getting its due is the increasing sense among Americans that abortion is no real solution for mothers, for their babies, or for society in general.” 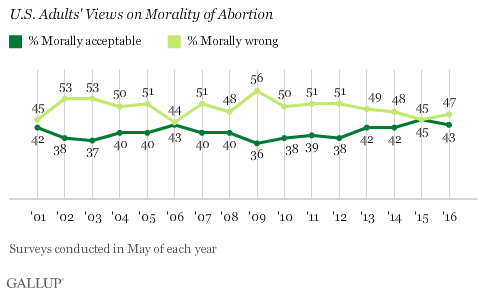 But The New York Times columnist Ross Douthat wrote in 2012 that abortion trends in developing and developed countries are like apples and oranges.

Comparing liberal and conservative areas of the country is more productive, he said. If cheap contraception was the answer, liberal areas like Massachusetts (with five Planned Parenthood centers) should have a lower rate of abortion than conservative states like Mississippi (with one Planned Parenthood center). Instead, Massachusetts performed 15.3 abortions per 1,000 women of reproductive age, compared to 3.8 abortions per 1,000 women of reproductive age in Mississippi.

Public support for abortion may also play a role. The country is about evenly split on the issue, and has been for nearly two decades.

Gallup dug in a bit deeper with another question: 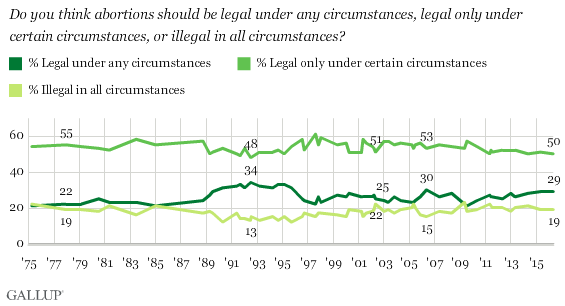 “A follow-up question asked of those favoring the middle position clarifies that most of these—constituting 37 percent of Americans—think abortion should generally be rare, occurring in only a few circumstances,” Gallup reported. “The other 13 percent think it should be legal in most circumstances or are unsure.”

Notably, millennials don’t support abortions at a discernibly higher rate than those who are older.

“Although public opinion on abortion has stayed relatively steady for four decades, support for legalizing the procedure under any circumstance spiked in the early 1990s, when today’s fortysomethings were coming of age,” wrote Emma Green for The Atlantic in 2015. “Their younger peers haven’t had a similar shift in attitudes, though. Even though millennials feel more open to things like pre-marital sex and same-sex marriage than their older siblings and parents and grandparents, they still feel conflicted about abortion.”

“In many ways, this statistic is the most important for understanding attitudes toward abortion in the United States,” Green wrote. “Many people see it as a moral issue, because it necessarily involves defining what ‘life’ means; on this kind of topic, a lot of people look to their faith.”

What Both DC Marches Agree On: Abortions Haven’t ...