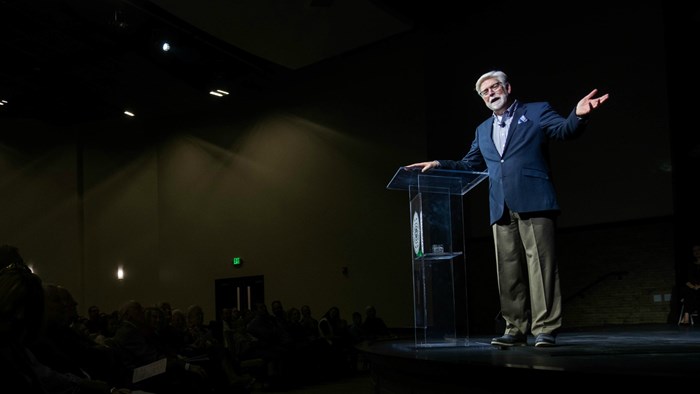 American pastors aren’t as young as they used to be.

As clergy live longer and stay in ministry longer, the average age of Protestant senior pastors has risen to 54—a decade older than 25 years before, when the average age was 44.

Now, just 1 in 7 pastors leading congregations is under 40, according to Barna Group’s 2017 State of Pastors project.

In the new report, Barna president David Kinnaman called the aging pastorate “one of the most glaring challenges facing the church today.”

The pulpit has been graying for decades. In the ’60s, a majority of pastors were under 45. In 2017, most are over 60. The age shift stems from evolving career expectations and difficulty passing leadership on to millennial-aged pastors, Barna reported.

The research, conducted in partnership with Pepperdine University, represents surveys and interviews with 14,000 Protestant pastors.

Today’s pastors are less likely to go from congregation to congregation during their careers. Back in 1992, Barna found the average church tenure was four years, compared to more than 10 years in 2017. (Research by Leadership Network in 2014 indicated that megachurch pastors stay even longer than that; the pastors at America’s 100 biggest Protestant congregations had served for 21 years on average.)

Older clergy may actually have a harder time finding new jobs as they age, forcing them to stay longer. As CT Pastors has reported, when a senior pastor spot opens up, some churches seek out younger candidates who are expected to serve long-term or draw in younger congregants.

Finances also keeps pastors preaching into their 60s, 70s, and beyond. Though a majority of pastors said they were confident about their retirement security (71%), some cannot afford to lose the paycheck, Barna found.

Church leaders have been anticipating the Baby Boomer generation’s transition for years. Thom Rainer, LifeWay president and CEO, predicted pastors of this generation would be reluctant to step away at traditional retirement age, and that when they do retire, it will be hard to replace pastors who served in such a lasting and impactful way.

“A number of Boomer pastors and staff are struggling to decide what their next phases of ministry and life should be. Many had a mid-life crisis of sorts; now they are having later-life crises,” wrote Rainer.

Also, more Americans—particularly in evangelical and black Protestant congregations—enter the pastorate as a second career. They switch from a range of former career fields, with law, botany, physical therapy, public affairs, and music education ranking as most popular (and somewhat unusual) pathways to the pulpit, according to the State of Pastors results.

There are drawbacks and benefits to graying leadership. The percentage of pastors with kids under 18 has dropped by almost half in 25 years, down to 35 percent. With older pastors, most now have grown children. Without kids at home, they may have more flexibility to balance family and church life. Though most (60%) are satisfied with their relationship with their offspring, an earlier Barna study found that 42 percent said they wish they had spent more time with their kids while they were at home.

Most pastors feel more called to ministry the longer they serve. Two-thirds of pastors reported being “more confident” about their role as a pastor than when they first began.

Older pastors also enjoy their ministry work more. Leaders age 50 and older, as well as those who have been in ministry for more than 30 years, report being “highly satisfied” with their vocation as a pastor and with their current church more often than younger and less-experienced leaders.

Overall, two-thirds of pastors rank preaching and teaching as their favorite aspect of their job. The least favorite aspect? Only 2 percent picked organizing church meetings and events as their No. 1 task.

In the middle of those two, 1 in 10 called “developing other leaders” their most enjoyable task—a crucial role as pastors prepare to pass leadership on to a new generation of preachers.

“The bare facts of the matter are that even the wisest of older pastors is not here indefinitely, and his wisdom will be lost to the community of faith unless it is invested with the next generation,” the report stated. “Even more urgent, however, is the prospect of a massive leadership shortage in the coming decades.”

The Struggle to Find the Next Generation

Barna notes how many millennials (defined in the study as those born between 1984 and 2002) express a desire to choose a job that is meaningful and makes an impact. Despite these ambitions, fewer look to ministry as career, making it a struggle for church leaders to appoint and equip younger successors.

More than two-thirds of today’s pastors (69%) say it has become harder to identify suitable pastor candidates among millennials. Pastors of small congregations, with a smaller pool of potential leaders, were more likely to agree.

In some ways, this generation has confounded the church. While the age group overall is more skeptical and secular, practicing Christian millennials remain devout and even outpace older generations in several areas.

Nearly all pastors (9 out of 10) say they would recommend the career to younger Christians interested in going into ministry. The ones who wouldn’t were more likely to be less satisfied with their own vocation, leaders of declining congregations, or pastors of color, the survey said.

“Many boomer pastors and staff have strong desires to mentor the next generation,” wrote Rainer. “They see their greatest hope for influence now in people rather than society and structures.”

Finding younger leaders to follow aging pastors may start early. More than half of pastors sense their calling as young adults, between ages 14 and 21. A vast majority attended church as a kid (85%) and participated in youth ministry (80%).

“Those of us who come alongside young adults during these years can help create a safe place for them to experiment, discuss, and change their minds about the future,” said Terry Linhart, professor of Christian ministries at Bethel College. “The best thing we can do is to help them connect more deeply to God, facilitating opportunities for his Spirit to work in their lives.”

The questions and scenarios young Christians are working through as they discern their calling may not be the same as older pastors wrestled with decades before. Pastors over 50 admit it’s a challenge to engage the younger generation, according to Barna, and those who have been in ministry for more than 30 years say they struggle to keep up with cultural changes.

Pastors 50 and older, on the other hand, admit engaging younger generations is a challenge for them. In a similar vein, “keeping up with cultural changes” is uniquely challenging for leaders who have been in ministry for 30 years or longer.

As pastors disciple and train up leaders from the millennial generation, Kinnaman points to signs of hope in God’s work through his people. “The Holy Spirit has sustained the church for a couple thousand years now and shows no sign of calling it a day,” he concluded. “Let’s trust the Spirit’s sustaining power not to quit, and prepare for the future.”