SBC agency says Moore’s job requires ‘speaking prophetically both to our culture and to our Convention.’
Kate Shellnutt
March 20, 2017 8:10 PM 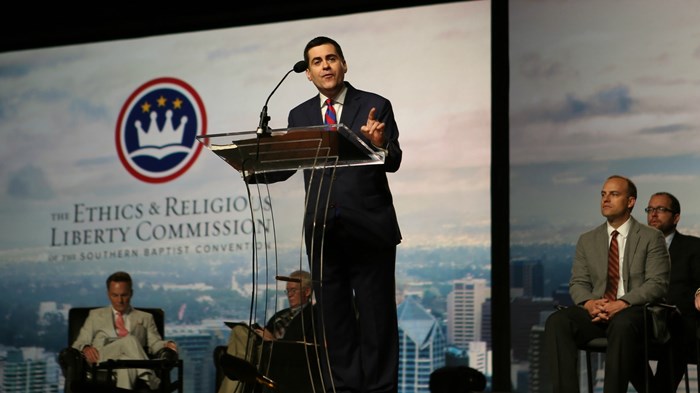 A week ago, Moore met with denominational leader Frank Page over an investigation into numerous complaints regarding the ERLC. The criticism centers around Moore’s vocal opposition to Trump and his campaign, his characterization of the faith and motives of Trump’s Christian supporters, and whether such messaging (toward fellow Southern Baptists not DC lawmakers) extended beyond the proper role of the ERLC president.

Moore reiterated and clarified the apology he shared in December, but ultimately stood by his positions.

“I stand by those convictions, but I did not separate out categories of people well—such that I wounded some, including close friends,” said Moore. “I cannot go back and change time, and I cannot apologize for my underlying convictions. But I can—and do—apologize for failing to distinguish between people who shouldn’t have been in the same category with those who put politics over the gospel and for using words, particularly in social media, that were at times overly broad or unnecessarily harsh. That is a failure on my part.”

The Executive Committee of the Southern Baptist Convention (SBC), led by Page, has received a wave of criticism directed at Moore and the ERLC. More than 100 congregations have threatened to hold back funding from the denomination’s Cooperative Program—including Prestonwood Baptist in Dallas, which opted to withhold its $1 million contribution.

The results of the SBC investigation into the issue won’t be completed until September, and it is unclear how today’s statements by Moore and the ERLC will be received by those congregations.

His church previously cited “various significant positions taken by the leadership of the [ERLC] that do not reflect the beliefs and values of many in the [SBC]” for why it was escrowing funding to the Cooperative Program.

In today’s statement, the ERLC asserted that it is Moore’s job to speak “prophetically both to our culture and to our Convention.”

J. D. Greear, a notable North Carolina pastor who withdrew from last year’s election for SBC president, applauded both Moore and Graham for their remarks: “Grateful for the gospel unity being pursued by these leaders.”

Others who have criticized Moore appreciated the direction of the ERLC’s statement and the desire for unity among the denomination.

“While issues with the ERLC run deeper than just the election, and while these issues need to be addressed along with a broader discussion of whether or not the ERLC is necessary, I pray that in the meantime any interpersonal conflicts have been resolved,” Josh Hall, a Southern Baptist pastor in Missouri, told CT. “I am praying for Dr. Moore and all those in leadership in the SBC.”

In Monday’s statement, Moore repeated that fellow Southern Baptists have “reasonable and defensible” reasons to disagree with him on matters of conscience, such as how to vote in the 2016 election.

He also claimed that his critiques were not directed at fellow Southern Baptists on Trump’s advisory board, but at prosperity preachers who distorted biblical teachings to fit Trump’s political priorities.

“To be clear, I was also not meaning to suggest it was sinful for Southern Baptists or others to advise candidates or to serve on advisory boards in order to bear some influence there,” stated Moore. “What I was attempting to talk about were those—most often prosperity gospel teachers—who were willing to define the gospel in ways that I believe untrue to the plan of salvation, or to dismiss the moral concerns other Christians had.”

Moore blamed himself for his earlier apology not coming across clearer, stating that critics didn’t accept his December explanation “not because of any deficiency of grace on their part, but due to my own fault.”

The ERLC executive committee stated it has encouraged reconciliation through “private efforts rather than public comments,” and defended how Moore has handled the criticism.

“These conversations will remain private,” it stated, “but we are convinced that Dr. Moore has sought to be attentive and responsive to those who have brought concerns to him.”