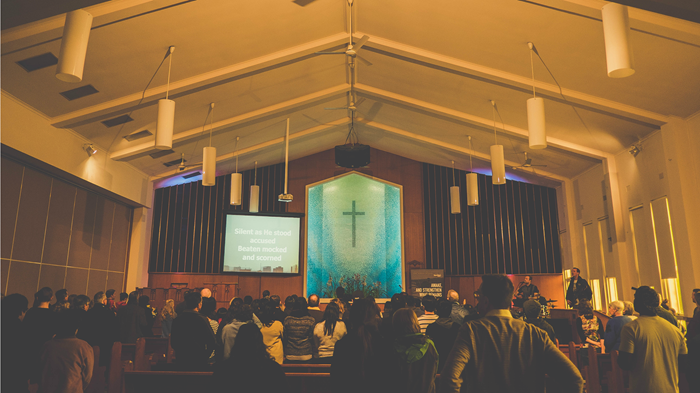 They’ve seen a drop in attendance as some immigrants stay home rather than risk getting arrested on the way to Sunday services. Pastors find themselves preaching about fear to mixed-status Latino families who are already preparing for the worst: explaining to their kids what happens if Mom or Dad have to leave and packing up their belongings to stay with relatives if they get detained.

Trump’s immigration plan does away with earlier exemptions for residents here illegally, putting more undocumented workers up for arrest, detention, and deportation, the Department of Homeland Security announced last month.

In the wake of the new policy, an “unprecedented level of fear” rose among majority-immigrant congregations, according to Matthew Soerens, director of church mobilization for World Relief.

“These new guidelines create anxiety and concerns about the future of the members of our church and their families,” the HBPA, a coalition of Hispanic Southern Baptist pastors, stated this month. “As an alliance of churches, we are doing our part guiding our members through this challenging time by helping them understand their citizenship is in heaven.”

World Relief and the churches it works with “are fielding many, many inquiries from distressed immigrants who have seen news reports about changing immigration enforcement priorities and of deportations of undocumented people with no criminal convictions,” said Soerens. “Many are very afraid for themselves and their children.”

A majority of Hispanic Christians who don’t hold US citizenship are concerned about their place in Trump’s America, including 51 percent of green card holders and 57 percent of undocumented immigrants, according to Pew.

Meanwhile, 38 percent of Latino Christians born in the US (including Puerto Rico) share this concern. So do 31 percent of those born outside the US but who are now citizens.

“The anxiety in Christian conservative, evangelical churches has grown exponentially, because many of our worshipers, many of the families we serve, many of the families in our pews, may very well lack the appropriate documentation, even though we have a ‘don’t ask don’t tell’ policy,” said Samuel Rodriguez, president of the National Hispanic Christian Leadership Conference (NHCLC) and one of Trump’s evangelical advisers. He said that the new president has not kept his promise to prioritize family unity and confine deportation to violent criminals.

Some pastors and churches may be scared or confused over whether serving undocumented immigrants puts them on the wrong side of the law. Similar hesitancies came up when Alabama criminalized certain activities like offering rides to people in the country illegally.

They explained how Reyes, director of the Texas Baptist Christian Life Commission, “joined Christian leaders who mobilized to stop legislation that would have criminalized ministers for transporting the undocumented to church services,” while Cross “saw the impact of this sort of legislation firsthand in Alabama” at his Southern Baptist church. They noted:

The courts have not decided conclusively what that means—whether driving someone to church, to English classes or to the hospital might qualify. But the bill specifically exempted first responders, police and child protective services but not church staff or volunteers, and that is troubling.

It was enough to scare some churches into canceling any sort of transportation involved in their ministry to immigrants. At ministry centers that help feed the hungry, people were afraid to give food to anyone without being certain that they were here legally.

“Churches and ministries are here and prepared to minister, not to determine immigration statuses,” they wrote. “We are focused on living out Jesus’ greatest commandment: to love our neighbors as ourselves.”

Dale Hanson Burke, author of Immigration: Tough Questions, Direct Answers,also wrote about what to do when one doesn’t know a family’s status.

Of the more than 700 Latino Christians surveyed by Pew, half were foreign born and half were US born (including Puerto Rico). Of the foreign-born, 42 percent are now US citizens, 28 percent have green cards, and 30 percent remain undocumented.

Their activism reflects the growing diversity among their denomination; a report released last month showed a majority of Southern Baptist church plants are predominantly non-Anglo, and LifeWay Christian Resources has become the world’s largest commercial publisher of Spanish Bibles.

Meanwhile, its research division found in 2015 that 4 in 10 American evangelicals saw recent immigrants as an evangelism opportunity, compared to 5 in 10 that saw them as a drain on resources. Pew has calculated that the US gains 600,000 new Christians each year through immigration.

“We have taught our congregations that the reason why they came to this country, was not what they initially believed it was,” stated the HBPA. “It wasn't because they were chasing the American dream but because God was chasing them, drawing them to Jesus.

“It was here where many of them came to know Christ and no matter where they go from this place, their new objective in life is the proclamation of the gospel.”