(UPDATED) How to classify Christian deaths in DRC is crux of persecution debate.
Sarah Eekhoff Zylstra|March 31, 2017 11:17 AM 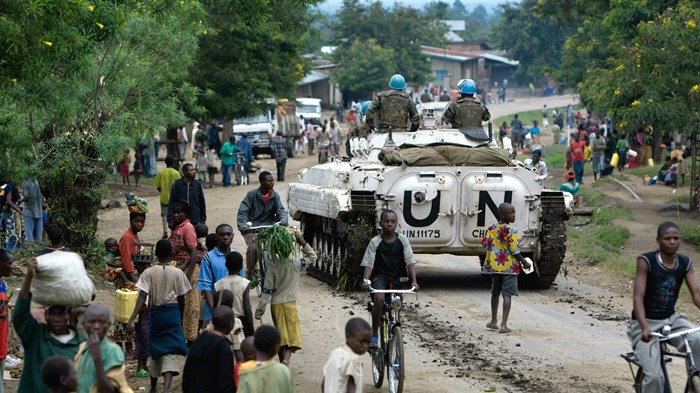 Why do calculations of Christians killed for their faith worldwide each year range from 1,000 to 100,000? The reason largely comes down to one country: the Democratic Republic of the Congo (DRC).

Researchers disagree on what to do with the approximately 4 million people who died in the Central African nation’s civil war from 2000 to 2010. Meanwhile, the country has remained prone to violence, leading Catholic news site Crux to examine it in March as “the new look of Christian martyrdom.” (The death of an Eastern Mennonite University graduate investigating DRC violence for the United Nations drew international headlines weeks later.)

The DRC is an example of “today’s crop of new martyrs,” who “generally aren’t being killed for reasons directly related to their religious beliefs, but rather the values and humanitarian stances those beliefs inspire,” according to Crux.

That makes them hard to count. Are the nuns who were shot while running a home for the elderly in Yemen martyrs? How about the foreign missionaries killed by guerrillas in Laos? The eight aid workers and journalists who were killed by villagers in Guinea while trying to raise Ebola awareness? The 115 who died in a church hostel collapse in Nigeria?

How do Christians count the cost—accurately? Which ones are martyrs?

Most of them, according to Todd Johnson of the Center for the Study of Global Christianity (CSGC) at Gordon-Conwell Theological Seminary. CSGC defines martyrs as “believers in Christ who have lost their lives prematurely, in situations of witness, as a result of human hostility.”

The CSGC’s martyrdom tally counts Christians who are targeted for their beliefs or ethnicity, killed while worshiping in a church, or murdered because they are the children of Christians. It also counts Christians killed in battle—essentially, anyone who “died prematurely, acting out their faith,” CSGC assistant director Gina Zurlo told World Watch Monitor.

“Rebels, for example, often single out Christians because they do not cooperate with malicious plans to expand rebel territory,” Johnson told Crux. “Such Christians, when they are killed as a result of actions springing from their faith, fit our definition of ‘martyrs,’ whether or not those actions were accompanied by explicit proclamations of their faith.”

That broad definition results in some pretty high numbers. For example, the CSGC considers about 20 pecent of the DRC civil war deaths to be martyrs, which heavily influences its tally (averaged over a decade).

Thus, the CSGC calculated that 90,000 Christians were killed for their faith in 2016. That number made headlines worldwide over the holidays when an Italian named Massimo Introvigne explained it on the Vatican’s official radio station.

“That is one every six minutes,” Introvigne said in a sound bite that reverberated across the internet. He compared statistics from three US research centers and his own—the Center for Studies on New Religions in Turin, Italy—and estimated that 500 to 600 million Christians in the world can’t practice their faith freely.

“The number of martyrs today is greater than in the early centuries [of the church],” Pope Francis said in December, on the day the Catholic Church honors Stephen, the first martyr. “When we read the history of the early centuries, here in Rome, we read about so much cruelty to Christians. It’s happening today too, in even greater numbers.”

Global Servants founder Mark Rutland agrees. “The brutality of the first-century Roman persecution was real and those early martyrs should be honored,” he wrote for Charisma. “But in all of human history, the most dangerous time to be a Christian is actually right now.”

However, his number is still far too high for Open Doors, a leading advocate for the persecuted church, which uses a much narrower definition of martyr. In its latest World Watch List of the world’s 50 worst persecutors of Christians, it counted just 1,207 believers who were killed for faith-related reasons during the 2016 reporting period (November 1, 2015, to October 31, 2016).

Open Doors verifies every martyrdom, relying on witnesses whenever possible, Open Doors director of research Ron Boyd-MacMillan told World Watch Monitor. That means the number is “probably lower than it should be, but you’ve got to give figures you can absolutely verify.”

“Calling millions of Christian victims of bloody civil wars ‘martyrs’ is a bit like calling all the victims of 9/11 ‘heroes,” he wrote for The Washington Post in 2013. “To be sure, many exhibited remarkable heroism. But most 9/11 victims were in the wrong place at the wrong time.”

This debate among researchers, including how to count DRC deaths, was explored in contrasting chapters of Sorrow and Blood, a World Evangelical Alliance-backed book on issues surrounding the persecuted church.

“No, these modern martyrs were killed because of how they lived out their faith. Their faith led them to seek justice and serve others, and the result was that it cost them their lives.”

“There is a huge gray area around the question of ‘martyrs,’” Frans Veerman, director of Open Doors’ World Watch List, told CT in 2013. “When Christians are isolated and denied clean drinking water and medical care because they are Christians and refuse to become Muslims—[and thus] they perish quicker than others—are they martyrs? In a strict sense, they aren’t. But when the whole mechanism behind [their deaths] is studied, we can say they are.”

Counting too many can “take away” from the deaths of active witnesses to the faith, International Mission Board global strategist Nik Ripken told CT.

It can also weaken the credibility of the counter, Birdsall wrote.

“What’s at stake is credible religious freedom advocacy. Abusive regimes fear public scrutiny and look for any opportunity to undermine an advocate’s credibility,” he wrote. “Conservative estimates of the severity of persecution allow us to say to the world: We know this much abuse happened, and the reality may be worse.”

But counting too few can fail to acknowledge the scope of the problem, and doesn’t honor the deaths of the “nameless martyrs,” Johnson told CT in 2013.

Thomas Schirrmacher, chair of the World Evangelical Alliance’s theology commission and its ambassador for human rights, told World Watch Monitor that while 90,000 is a misleading statistic because it gives “the impression that somebody counted 90,000 cases,” such higher figures “do serve to remind people of the gravity of the problem.”

Both the CSGC and Open Doors argue that landing on an accurate figure—or at least being aware of what exactly is being counted—is important.

That “tells us this is something that’s not isolated,” Johnson told CT, and thus churches should be “prayerful and concerned.”

CT has previously reported on the difficulty of measuring martyrdom.

Editor’s note: This post has been modified out of respect for the family of UN worker Michael Sharp.