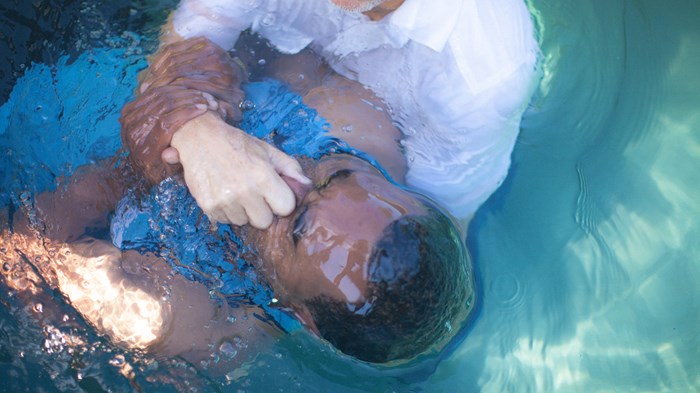 It’s the stuff of Sherlock Holmes. Or of church nightmares.

After a Syrian Muslim man converted to Christianity, he asked to be baptized by First Presbyterian Church in Tulsa. The pastor agreed, and on December 30, 2012, the man was baptized in front of the PC(USA) congregation.

The man, whose identity remains anonymous for security purposes, said the church promised to keep his baptism quiet, since shari‘ah law demands that converts from Islam be executed.

He flew to Syria almost immediately after his baptism in order to marry his fiancée. A few weeks later, while still in Syria, he was kidnapped by Islamist extremists—including his uncle and his cousin—who said they learned about his conversion from the church’s website, he said.

First Presbyterian had included the man’s baptism in its weekly bulletin announcements, then posted those announcements online. It was the first thing that popped up under his name in an internet search, he told the Tulsa World.

For three days, the extremists tortured him, telling him they were going to kill him for his conversion. They tied his arms behind him and beat him, keeping him for hours under a 55-gallon electrified drum that shocked him whenever he touched it, he said.

When they took him out on the fourth day, “they had the video camera out, and I knew that was my day. I’m going to go,” the man told the Tulsa World. He managed to free his bound arms, then struggled with his uncle for a gun. He shot his uncle, then fled.

During the next few months, the man and his wife managed to make their way through Lebanon and Turkey back to the United States.

An Oklahoma pastor who had known the man for several years told the Tulsa World that the convert’s claims were “absolutely credible,” and Oklahoma Congressman Jim Bridenstine’s aide confirmed the congressman helped expedite a visa for the man’s wife.

That wasn’t the end of his trouble. Suffering from psychological and physical aftereffects, the man gets frequent death threats and cannot ever return to Syria, he said. Their house and two cars there are a loss, and he won’t be able to visit his son who still lives there, he said.

So he sued the Tulsa church for $75,000, charging it with breach of contract, negligence, and outrage.

The church asked for the case to be dismissed because the baptism was a constitutionally-protected religious practice, among other reasons.

The court said the case was too complex and it was too early in the trial to tell, and denied the motion.

The church tried again, arguing that the court didn’t have jurisdiction over ecclesiastical matters like theology and customs.

This time, the judges agreed.

“A key tenet of the Presbyterian Church is that baptism makes one part of ‘the visible church,’” wrote Judge Daman Cantrell. Listing those who have been baptized publicly “is a key part of how the church requires a conversion and baptism to be ‘visible’ to the world.”

“The court does not have subject matter jurisdiction to parse out any liability arising from the free exercise of the deeply held sacrament of Christian baptism,” he concluded. Instead, that’s a matter for the PC(USA) court system, he wrote.

The man appealed to the Oklahoma Supreme Court, arguing that publishing a person’s name and baptism online was not an ecclesiastical matter.

Last month, they disagreed with him, siding 5 to 3 with the lower court and the church.

“The record indicates that the public nature of baptism is an integral part of the Presbyterian Church’s understanding of the sacrament,” Chief Justice Douglas Combs wrote for the majority. “For example, the Constitution of the Presbyterian Church (USA) provides: ‘By baptism, individuals are publicly received into the church to share into the church to share in its life and ministry.’”

The judge pointed to the pastor’s testimony that “in accordance with the belief that baptism is a public declaration of faith, it is the long-standing custom and practice of the church each week to report in the Sunday bulletin the name of any person who was baptized the previous Sunday.”

Those announcements are then “delivered to individuals who are unable to attend services in person, and made available on the church’s website,” something the man did not specifically request to be shielded from, the pastor said.

The way the baptism was conducted and publicized was “rooted in religious belief,” the court found. “Per the church autonomy doctrine, the courts lack subject matter jurisdiction over the matter.”

“The present case does not involve a question of discipline, faith, or ecclesiastical rule decided by a church tribunal, nor does it involve an internal, administrative matter,” wrote Justice Yvonne Kauger. “It merely involves the church’s publication of appellant’s name on the internet.”

The PC(USA) Book of Order asks for a written record of baptisms, but doesn’t require that it be published online, she wrote.

In addition, this suit “satisfies an exception to the church autonomy doctrine” for serious “threats to public safety peace, or order,” she wrote.

“[A]ssuming that the allegations are true, Appellant not only personally suffered harm, but public safety and order were harmed as well,” she wrote. “He cannot use his own name in this very case because of the continuing threat to his safety, and the public harm that religiously-motivated attacks have been proven to cause.”

“This is the first case in the United States in which a court has affirmed that how a church conducts its baptisms is only the business of the church and is not subject to interference by the civil courts,” attorney John Tucker said. “That’s important, because baptism is an essential core concept of Christianity.”

It’s not the first time the internet has gotten Christians in trouble overseas. In 2014, a Canadian Christian working in China posted an audio file on his church’s website explaining how he was trying to reach North Korea with the gospel. He was later imprisoned in China for two years on espionage charges.

And in 2009, a longtime missionary couple were sentenced by a Gambian court to a year of hard labor for sending a wry comment in an email to their prayer list.