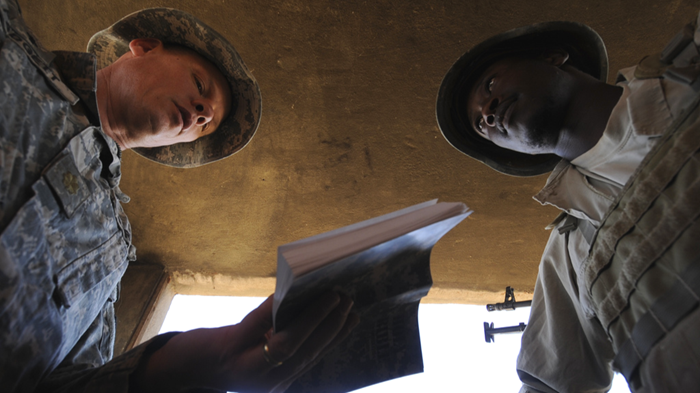 Some service members who don’t typically read Scripture will still turn to it during difficult times in their military careers, according to research released this week by Barna Group and the American Bible Society. 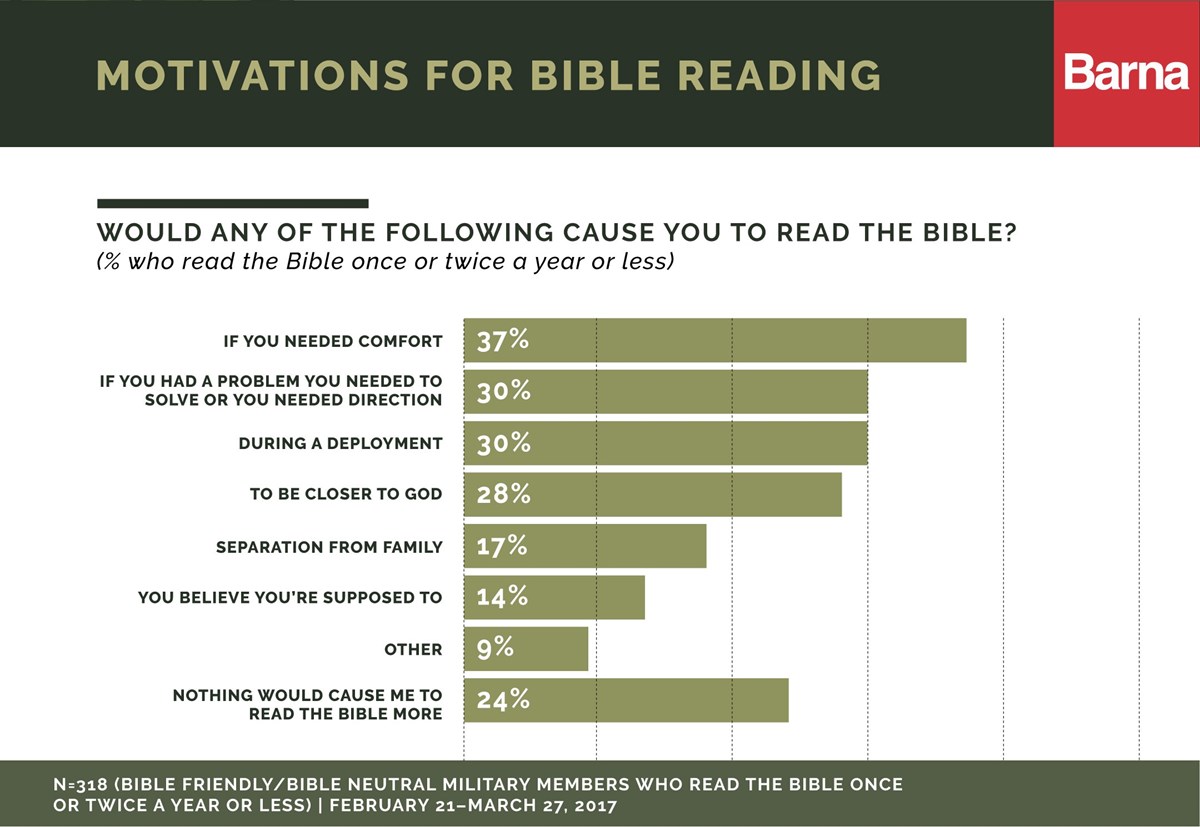 Several ministries focus particularly on providing Bible resources to active duty personnel and their families, knowing they are prone to seek out spiritual support and direction.

“They come from all walks of life, with the same problems we all face, most of them looking to fill a void,” said Michael Kelly, a chaplain at Fort Jackson in South Carolina. “It is at this moment that they reach out and we place a book in their hands: the New Testament, provided by Gideons.”

The Gideons International, which has partnered with military chaplains to provide free Bibles since the start of World War II, distributes 1.7 million of its pocket-sized, digital-camo-printed “service testaments” a year.

The American Bible Society’s armed service ministry reports that it has delivered 60 million Bible resources to the military over its history, including materials made especially for veterans facing post-traumatic stress disorder (PTSD), which are offered through Veterans Affairs (VA) medical chaplains.

Overall, two-thirds of military personnel believe “the Bible contains everything a person needs to know to live a meaningful life,” according to Barna. Among regular Bible readers in the military, almost all believe the Bible should have more influence in American society.

“Today, many military families are separated because of deployments, causing unique relationship challenges that many civilians do not face,” Cru says, describing its ministry to the military population. “Men and women in the armed forces experience and have to learn to cope with the effects of war. Common challenges like leadership stress, peer pressure are felt with greater intensity.”

In this unique context, military chaplains and fellow Christian service members lean on their faith and often try to share it as a source of comfort to others.

As of 2015, the top religious groups among military personnel were nondenominational Christians (26%) and nones (20%). The top affiliations for chaplains were Southern Baptist, Baptist, and Catholic.

“The military lifestyle can be a very dark place filled with difficulty, trauma, loneliness, and intense personal growth. It is also a community of intense connection, support, and resilience,” Corie Weathers, a licensed professional counselor and wife to an Army chaplain, told CT.

About 4 in 5 service members say they know faithful Christians serving alongside them in the military, according to Barna. A majority have a “very positive” perception of Christians, with 72 percent saying the believers they know reflect biblical ideals well. 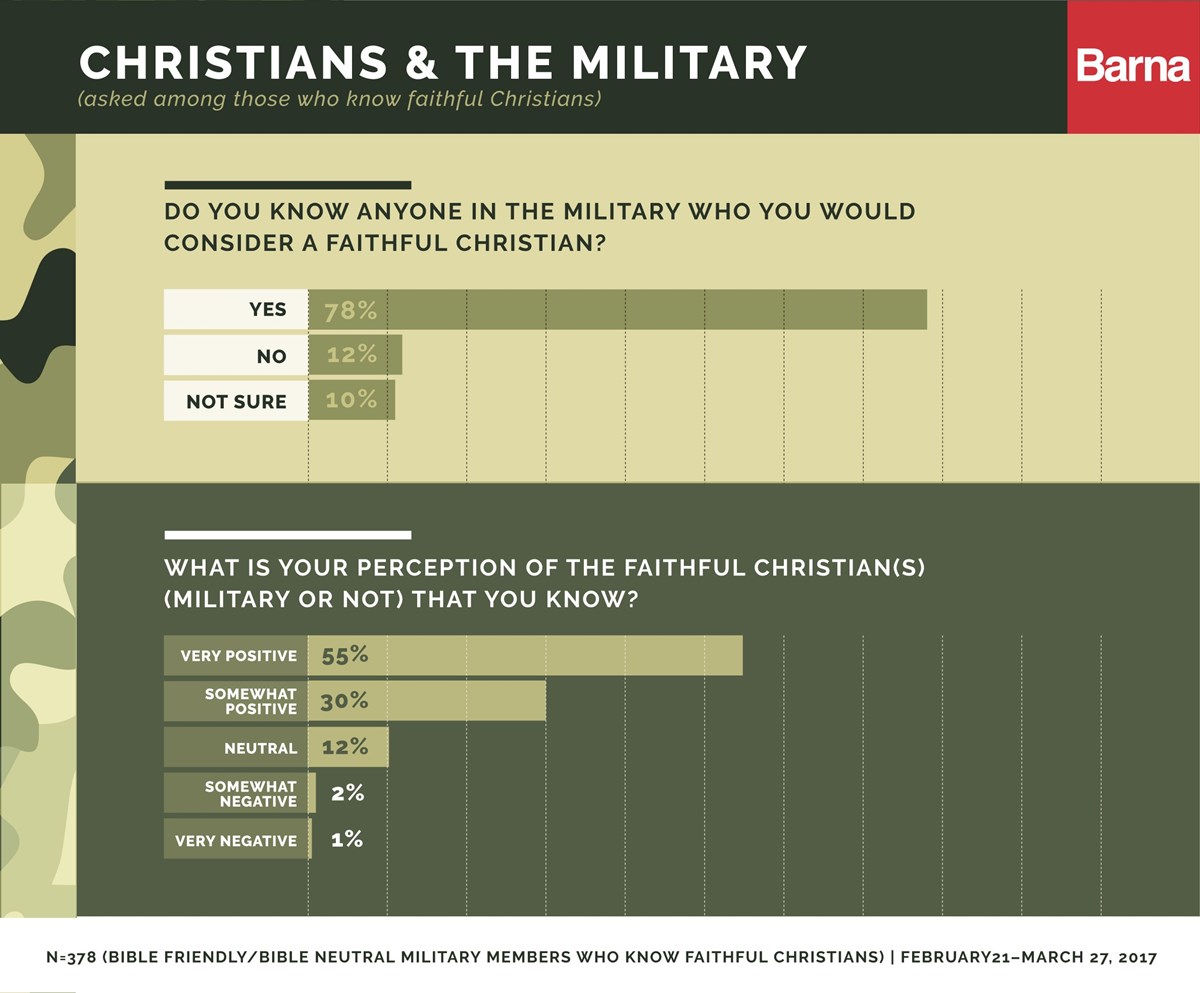 “As Christians, we must be real and transparent with the military community. Cliches and easy answers do not address the trauma of seeing your friend die in combat,” said Weathers. “Ultimately those questions of ‘Is there really a God?’ or ‘Is there more than this?’ come out of showing that we can be a safe presence for any family, regardless of their belief or unbelief.”

Currently, active-duty military personnel make up less than half a percent of the US population, and veterans make up about 7 percent. Service members consider their military affiliation and American heritage the most significant markers of their identity; over half ranked them as “very important,” compared to 31 percent who said their religion was very important, Barna found. 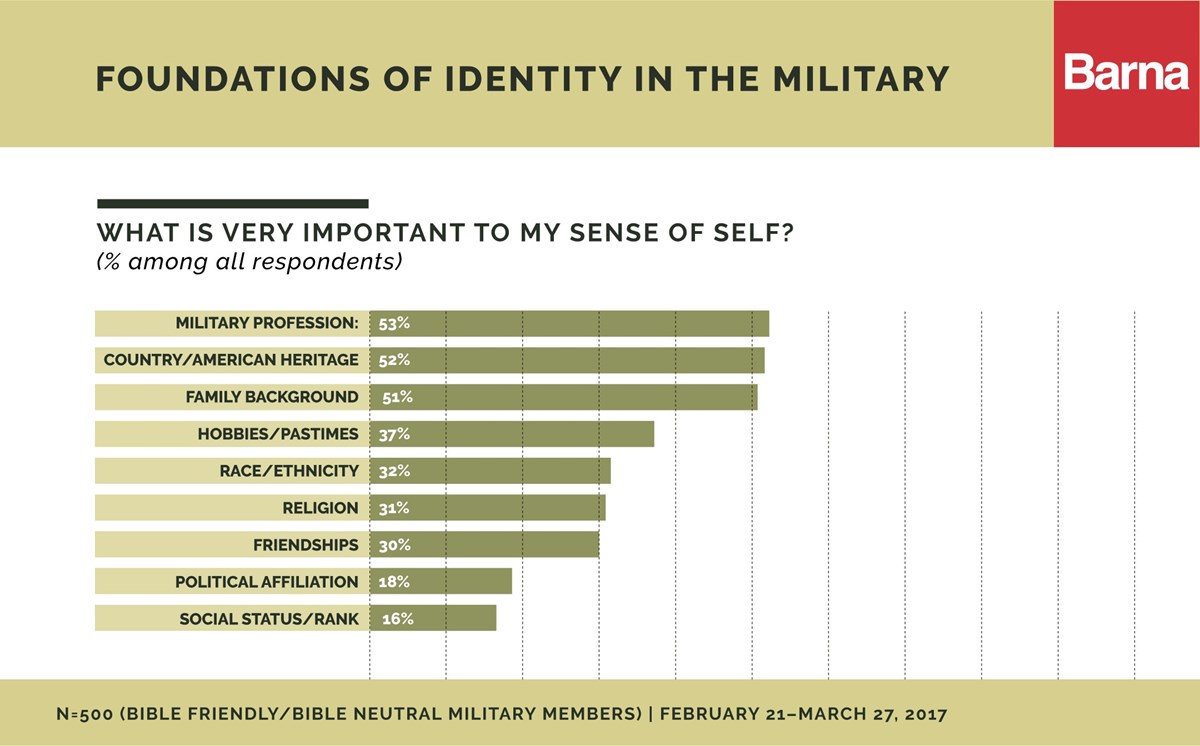 A 2015 CT cover story explored how churches can minister to veterans weighed down by “moral injury” and other combat trauma, and CT’s Onward, Christian Soldiers series described the unique tensions of being a believer in the armed forces.