But study of 101,000 people across 50 states discovers denominations make a big difference.
Sarah Eekhoff Zylstra|September 6, 2017 06:27 AM 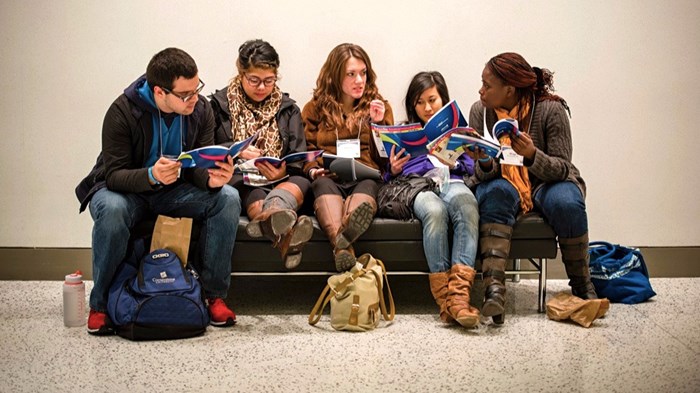 A massive compilation of surveyed Americans across all 50 states offers a rare look at minority Christians.

While Protestants in the United States remain mostly white, the share of Protestants of color has grown steadily from 17 percent in 1991 to 33 percent in 2016, according to a report released today by Public Religion Research Institute (PRRI).

“The American religious landscape has undergone dramatic changes in the last decade, and is more diverse today than at any time since modern sociological measurements began,” reported PRRI on its 2016 American Values Atlas, based on more than 101,000 bilingual surveys between January 2016 and January 2017.

In fact, the number of nonwhite Protestants has grown so large that the group has surpassed white mainline Protestants, and has nearly caught up with white evangelical Protestants.

Added together, minority Protestants—including black Protestants (8%), Hispanic Protestants (4%), and “Asian, mixed-race, or other” Protestants (3%)—make up 15 percent of the US population, while white mainliners make up 13 percent and white evangelicals make up 17 percent. (The margin of error makes this essentially a three-way tie.) 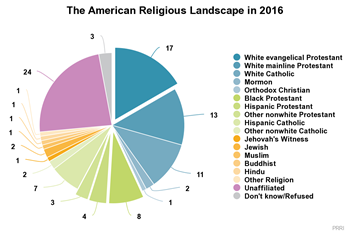 Or to split it yet another way: About a quarter of Americans (26%) are self-identified evangelicals. About two-thirds of those evangelicals are white (64%), while 19 percent are black, 10 percent are Hispanic, and the remaining 6 percent are Asian, mixed race, or other ethnicities. 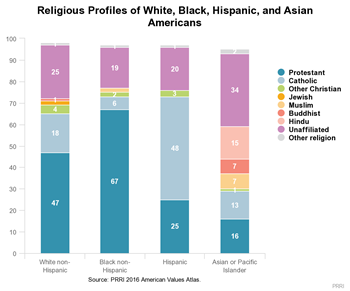 But that doesn’t mean that each US denomination is about a third nonwhite. “The degree of racial and ethnic diversity among Protestants varies considerably between denominational families,” PRRI noted.

Some of America’s largest denominational families are the most diverse.

Baptists are far and away the biggest, making up close to a third of the nation’s Protestants (32%). In fact, Baptists are so numerous that they’re three times the size of the next closest denominational families—Methodist (10.1%), Pentecostals (9.7%), and Lutherans (7.7%).

But more people doesn’t always equal more diversity. More than 8 in 10 Methodists are white (83%), as are more than 9 in 10 Lutherans (92%). The much-smaller Presbyterians (83%) and Episcopalians (80%) are also predominately white. 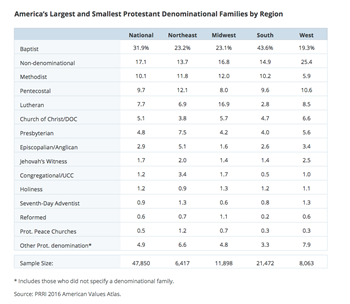 Nondenominational Protestant churches, which contain 17 percent of the US population, are 67 percent white, 13 percent black, and 10 percent Hispanic.

And it looks like this diversity will only increase over time.

Half of evangelicals under 30 years old are now nonwhite (50%), a far higher share than among evangelicals older than 65 (23%). PRRI found that “22 percent of young evangelical Protestants are black, 18 percent are Hispanic, and 9 percent identify as some other race or mixed race.”

This generational split can also be found in the political sphere.

Only half of white evangelicals now identify as Republicans (49%), followed by independents (31%) and Democrats (14%). 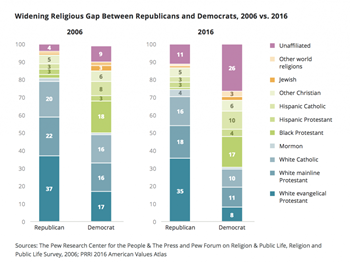 The Democrats who remain are older. White evangelicals over 65 are almost twice as likely as those under 30 to identify as Democrats (18% vs. 10%), while both age groups lean heavily Republican (49% vs. 47%).

“Nonwhite Christians tend to lean more toward the Democratic Party, although there is significant diversity in the partisan preferences of these groups,” PRRI reported. “No religious group more strongly identifies with the Democratic Party than black Protestants.”

Among the extensive report’s other findings: